Accessibility links
House To Vote On GOP-Backed 'Cut, Cap And Balance' Plan The Republican-backed legislation bars any increase in the debt ceiling unless Congress first passes a balanced budget amendment. It has little chance in the Senate, but it could clear the way for a bipartisan fallback plan to avoid default. 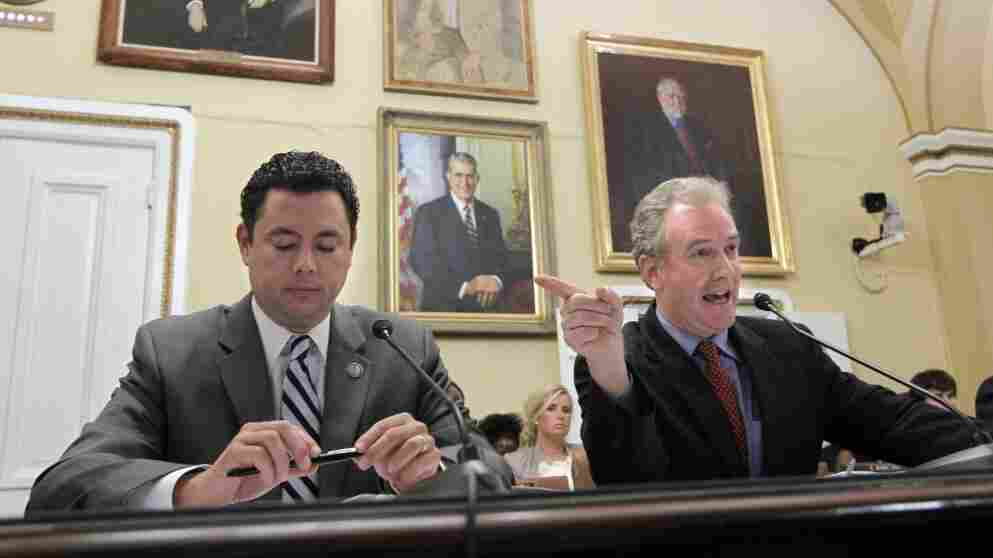 Maryland Rep. Chris Van Hollen (right), the ranking Democrat on the House Budget Committee, spars with Utah Republican Jason Chaffetz as they testify before the House Rules Committee on the Cut, Cap and Balance plan Monday at the Capitol. Scott Applewhite/AP hide caption 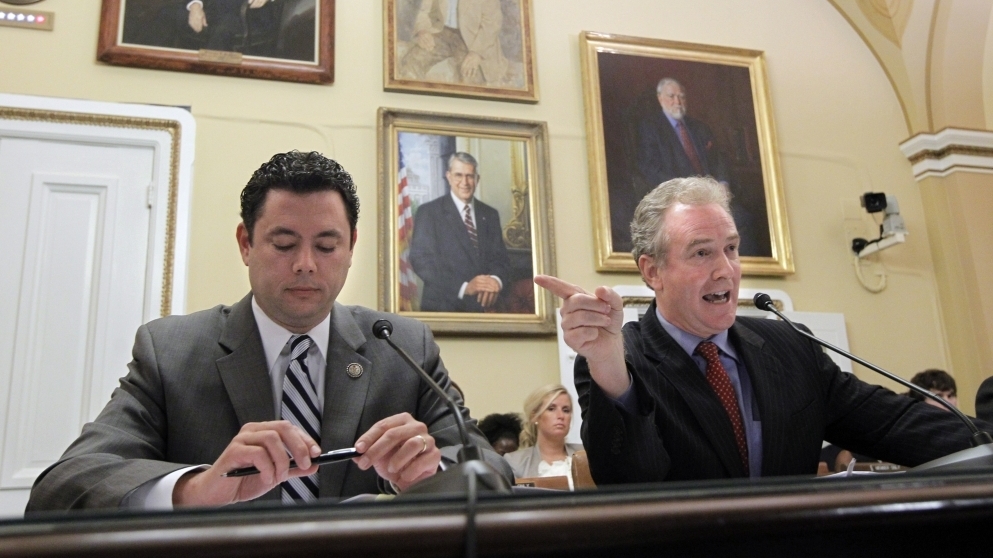 Maryland Rep. Chris Van Hollen (right), the ranking Democrat on the House Budget Committee, spars with Utah Republican Jason Chaffetz as they testify before the House Rules Committee on the Cut, Cap and Balance plan Monday at the Capitol.

The last day the U.S. Treasury says it can fully pay its obligations is exactly two weeks away — that is, unless Congress avoids default by raising the nation's legal borrowing limit.

Lawmakers in the House may help budge the debt ceiling impasse with a vote Tuesday on legislation dubbed "Cut, Cap and Balance." It bars any increase in the debt ceiling unless Congress first passes a balanced budget amendment. The bill has little chance in the Senate, but it could clear the way for a bipartisan fallback plan to avoid default.

Republican Rep. Jason Chaffetz of Utah has been pushing for weeks to get the GOP-controlled House to vote on the Cut, Cap and Balance bill he's sponsoring.

House Majority Leader Eric Cantor of Virginia cast the decision in terms of the impression it would make on the voting public: "So that we can demonstrate that we are getting things under control, and that the people who put us here can gain some confidence that we're going to begin to live like they do, around their kitchen tables and in their businesses, stop spending money we don't have, and begin to manage this debt and deficit down to balance."

But President Obama dismissed the Cut, Cap and Balance vote, calling it a political statement: "We don't need a constitutional amendment to do our jobs; the Constitution already tells us to do our jobs."

The White House said Monday the president would veto the Cut, Cap and Balance measure if it were presented for his signature.

White House communications director Dan Pfeiffer told reporters in a conference call that the limits the bill puts on spending would mean $400 billion in cuts every year over the next decade; it also requires two-thirds supermajorities in both the House and Senate for any tax increases.

"Cut, Cap and Balance is a great, maybe a good soundbite, but it would have a devastating impact on our economy and the guarantees that we provide seniors as part of Social Security and Medicare," Pfeiffer said.

Despite its strictures on spending, the bill would not actually balance the budget. It simply conditions raising the debt ceiling on Congress passing a separate balanced budget amendment.

"It says unless you pass this sort of twisted version of an amendment to the Constitution, unless you pass that, we're going to allow the United States to default on its obligations," said Maryland's Chris Van Hollen, the top Democrat on the House Budget Committee.

But a vote for Cut, Cap and Balance could provide House Republicans some political cover, if they wish to support some other means of getting the debt ceiling raised in time to avoid default.

House Speaker John Boehner late last week spoke of the upcoming vote as a necessary step to move forward: "Let's get through that vote, and then we'll make decisions about what'll come after it," the Ohio congressman said.

In the Democratic-controlled Senate, Majority Leader Harry Reid on Monday warned that Congress is fast running out of time to avert a debt default crisis.

"Because of that, we're going to stay in session every day, including Saturdays and Sundays, until Congress passes legislation that prevents the United States from defaulting on our obligations," the Nevada senator said. "I've spoken to the Republican leader; he understands the necessity of our being in."

But Senate Republican Leader Mitch McConnell of Kentucky also seemed to believe in having a vote on the Cut, Cap and Balance legislation before moving on to anything else.

"Not only is this legislation just the kind of thing Washington needs right now — it may be the only option we have if you want to see the debt limit raised at all," McConnell said.

In fact, there is another option, one that McConnell proposed last week. It's a backstop plan in which Congress authorizes Obama to raise the debt ceiling even if Congress votes against it, but that measure does not require any of the spending cuts Republicans have been demanding.

The Senate may approve that plan later this week and send it to the House. There, some spending cuts would be added to make the measure more attractive to House Republicans. More than half of them will need to be on board for raising the debt ceiling and avoiding default.