Accessibility links
Footmen, Mansions And Jazz: The Life Of 'Nica' She cried the first time she heard Thelonious Monk's "'Round Midnight," and proceeded to dedicate her life (and massive inheritance) to jazz. A new biography delves into the life of Kathleen Annie Pannonica de Koenigswarter, aka "The Jazz Baroness." 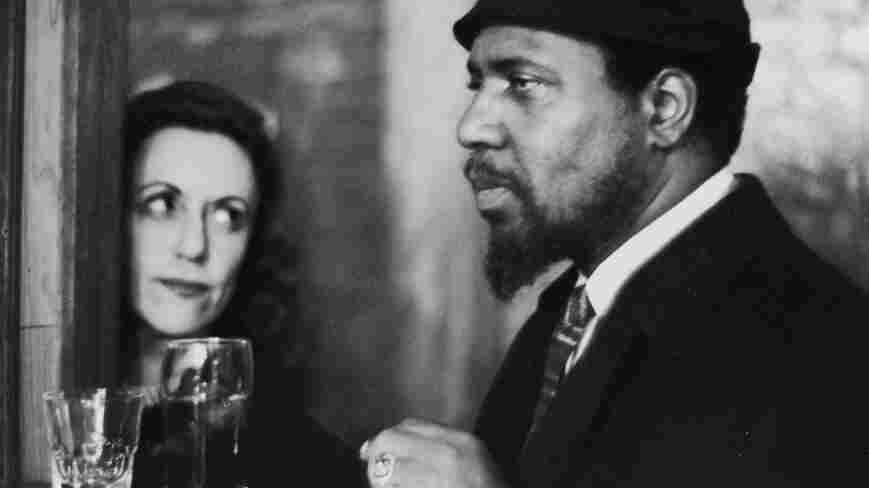 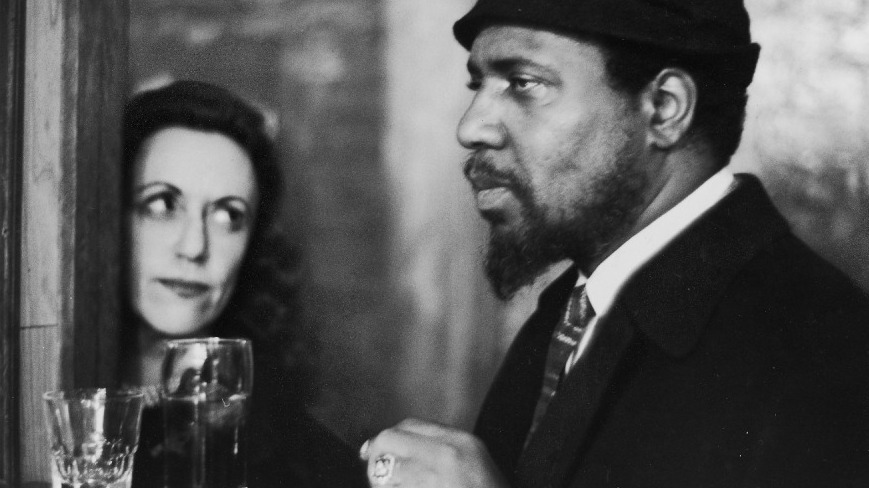 The baroness and Thelonious Monk

She was married to a baron, flew airplanes and fought for the French Resistance in North Africa. She smoked cigarettes from a holder, drove a Rolls-Royce and sipped Chivas from a silver flask. And, for the last three decades of her life, she dedicated herself to helping jazz musicians.

Known as "The Jazz Baroness," she was a patron to the likes of Thelonious Monk and Art Blakey. Charlie Parker died in her hotel room. Now, a new biography called Nica's Dream tells the story of Kathleen Annie Pannonica de Koenigswarter.

David Amram met her in 1956, when he was a 25-year-old French horn player in bassist Oscar Pettiford's band. He says Nica, as she was often called, took jazz seriously. 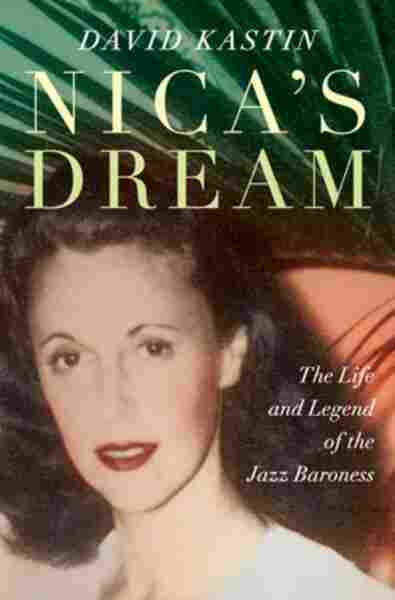 "It's easy to just dismiss her — to say this was just some wealthy, sophisticated, privileged person doing what they used to call 'slumming,' " Amram says. "That was not the case. She was elevating herself by being with these musicians. Young kids like myself at that time knew that we were [a part] of something important and of huge, lasting value."

Nica knew value. She was born in 1913 into one of the wealthiest families in the world, biographer David Kastin says.

"She's a Rothschild," he says. "She grew up in this fairytale existence. Luxury, huge country estates and London mansions. Private tutors and footmen and governesses."

But in 1951, Nica had an epiphany. She was on her way from London to join her husband, Jules, who was then the French ambassador to Mexico. On a stopover in New York, Kastin says, she got a call from a family friend who used to give her brother piano lessons.

"Teddy Wilson, the great swing-era pianist, caught her on the way to the airport," he says. "She was heading back to Mexico. And the story goes that he told her that she had to hear this new pianist. He sat her down and played Monk's 'Round Midnight.'

"She burst into tears. She had him play the record 20 times in a row. She missed her flight. Stayed in New York for a couple of more weeks. Headed home, and before long, she was back in New York permanently."

Nica moved into the Stanhope Hotel on Fifth Avenue and immersed herself in the jazz scene. 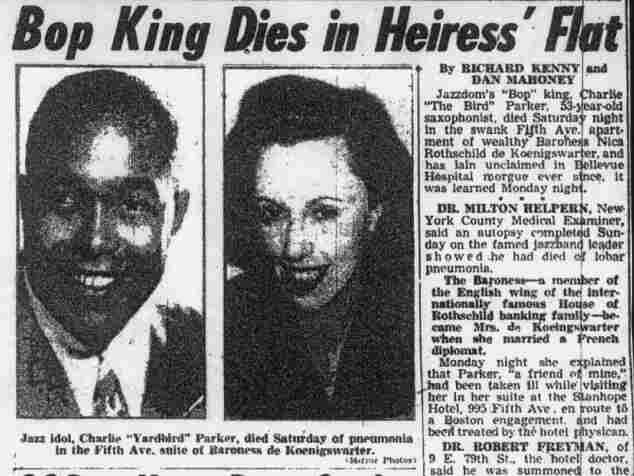 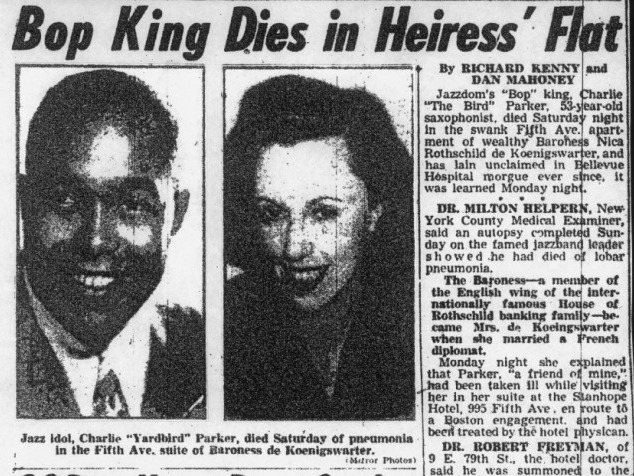 Charlie Parker and the baroness, 1955

She drove her Rolls-Royce to the clubs on 52nd Street each night and made friends with the musicians. One night, saxophonist Charlie Parker showed up at her door.

"He had come to the Stanhope Hotel suite, where he took ill, resisted going to the emergency room and, a couple of days later, he passed away on March 15, 1955," Kastin says. The Baroness "was splashed all over the front pages of the tabloids. 'Bop King Dies in Heiress' Flat.' "

The scandal led Jules de Koenigswarter to divorce her. She was kicked out of the Stanhope and moved across Central Park to the Bolivar Hotel. There, she fed her musician friends, got their horns out of hock, bought them cars and pianos and gave them a place to crash — and a place to jam.

Perhaps Nica's greatest contribution to jazz was nurturing the career of the man who first inspired her, Thelonious Monk. At the time, biographer Kastin says, Monk was an underappreciated genius who struggled with drugs, legal problems and mental illness.

"People dismissed him as a pianist, and did not see his music as being on the same level as someone like Bud Powell, for example," Kastin says. "He didn't have that kind of virtuosity, and he was so different."

"He also, of course, lost his cabaret card for long periods of time — six years, two years," Kastin says. "During which time he couldn't play in New York. She helped him and his family survive."

Thelonious Monk composed "Pannonica" as a tribute to Nica. It's among half a dozen jazz tributes to her.

Amram says what Nica offered everyone was encouragement.

"Well, Nica showed — during a period that was extraordinarily difficult — that someone cared. And Nica was that one person for so many who, after they were told 400 times that what they were doing was worthless ... Nica was a person who not only did want to hear that, but appreciated it, and made you feel that you were worthwhile."

Kathleen Annie Pannonica de Koenigswarter died in 1988. At her request, her children scattered her ashes over the Hudson River one evening, 'round midnight.