Accessibility links
Beyond Bartering: Banking On Community Connections Next week, Brown University is hosting a conference about time banking, a system whereby for every hour people spend doing something for community members, they earn a Time Dollar to spend on having others do things for them, such as gardening and cooking. Host Michel Martin speaks with Time Banks USA founder Edgar Cahn about how the concept reminds us that some things in life are more valuable than money.

Next week, Brown University is hosting a conference about time banking, a system whereby for every hour people spend doing something for community members, they earn a Time Dollar to spend on having others do things for them, such as gardening and cooking. Host Michel Martin speaks with Time Banks USA founder Edgar Cahn about how the concept reminds us that some things in life are more valuable than money. 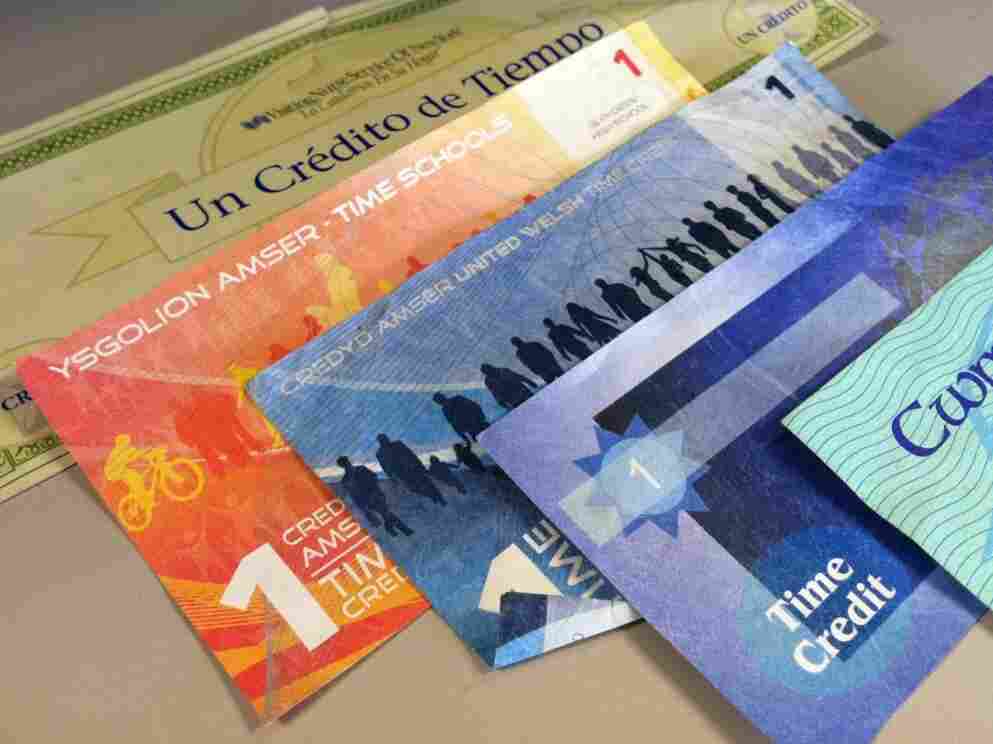 Volunteers earn these Time Dollars by doing things for others, such as making them jewelry or baking them pound cake. Amy Ta/NPR hide caption 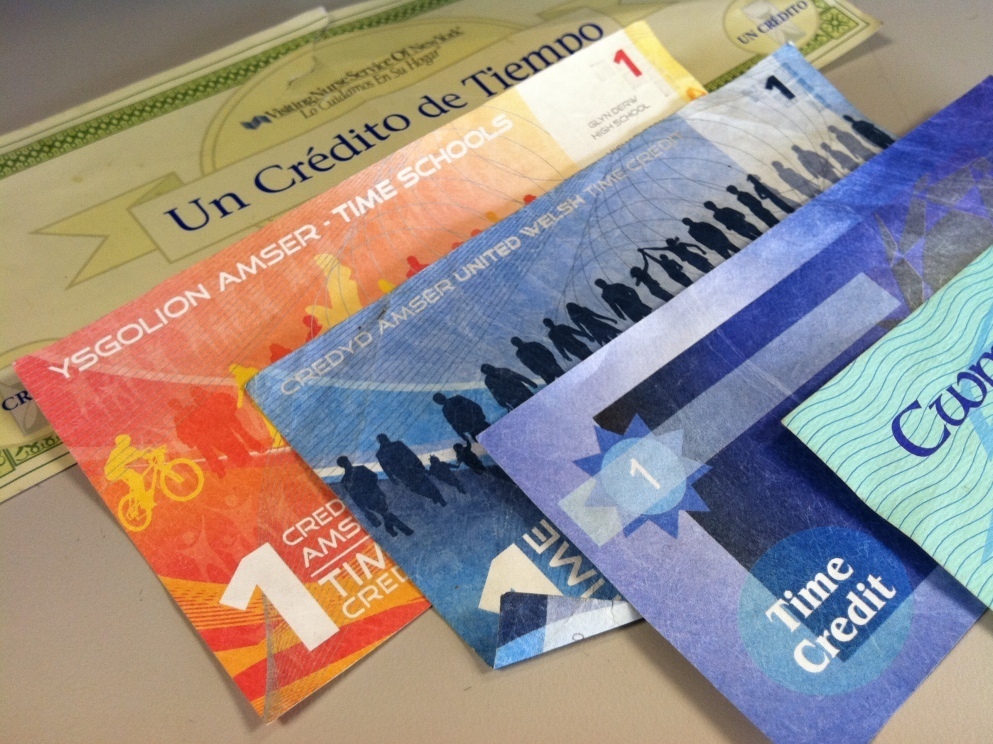 Volunteers earn these Time Dollars by doing things for others, such as making them jewelry or baking them pound cake.

MICHEL MARTIN, host: And now to matters of personal finance. In our Money Coach conversation last week, we talked about virtual currency that some used for real and virtual goods online. This week we want to talk about another alternative currency system that's gaining popularity.

It's called time banking. And it's kind of like a new twist on old-fashioned bartering. The way it works is that you donate an hour or more of your time in an area of your expertise to somebody in the community. Then you can redeem the hours you put in, time dollars, for something you want or need.

It turns out that time banks have been in existence for more than 20 years. They can be found in 40 states and 34 countries around the world. There's even a time banking conference coming up next week at Brown University in Providence, Rhode Island.

So we thought this was a good time to call upon Edgar Cahn. He founded the organization Time Banks USA. It helped start time banks around the country. And he's with us now in our Washington, D.C. studios. Welcome. Thank you for coming.

EDGAR CAHN: Good to be with you.

MARTIN: What gave you the idea?

CAHN: Actually, it was lying in bed in an intensive care unit recovering from a heart attack that had blown away 60 percent of my heart, according to the enzyme tests. And I really realized that I didn't like being useless. And that was 1980, and we were declaring a lot of other people useless like we are now. And I thought, well, if we've got all these useless people and all these problems and all these needs, why can't we put the two together? And I thought, well, in olden days we used to use something called money. And since President Reagan declared there wasn't going to be any more of that old kind of stuff, I thought, well, why can't we invent a new kind of money?

At that point people thought the heart attack had probably affected another organ.

CAHN: But they let me wander loose on the streets. And most people have heard of babysitting pools. So we know that - but interestingly enough we don't pass those traditions on. So we're not transmitting, really, the way they used to be. Both my sons said, dad, you're the wrong person to have invented time banking. You don't understand time and you don't understand banking. But other than that, you put the two together.

MARTIN: But you make a good point, is that this used to be very common. Like, I'll watch your kids, you watch mine. Or we would quilt together and everybody would, you know, quilt for whoever needed the quilt next. Or people have also heard of microfinance institutions, where everybody puts in a little bit of money and then you draw out what you need on a rotating basis.

But you had the idea of scaling it up. And scaling it up and applying it to things like, well, give an example of the kinds of things people time bank.

CAHN: I saw a paraplegic teaching seven teenagers chess on seven boards. I saw a woman in a wheelchair on oxygen helping a returning veteran teach a seeing eye dog how to be around people in wheelchairs. In New York City, it's - where Mayor Bloomberg launched - it's classes, it's dancing, it's gardening, it's handyman services. It's everything that we all used to do. But, you know, we have two things - we don't know whom to trust anymore. And so we live on top of each other, but as strangers.

And if I meet you on the street and I've known you for only five years, I ask you something really personal, like, do you think it'll rain tomorrow or who's going to win the game? And that's all I know about you. So we don't know the wealth in community that people have. And we've been taught that we've got to do it ourselves. We've got to make it on our own. People who like to help other people are really rotten at asking for help. So there's a whole new social etiquette of learning that, not only is it OK, but it's safe.

The other piece about time banking is it's not just about transactions. It's about group gatherings. We have monthly birthday parties. We have community projects. We do winterization or environmental work 'cause people really sometimes feel most comfortable getting to know each other on a project and then they'll ask each other.

MARTIN: What about people who say, how is it - because all time is valued equally, what do you say to people who say, well, my expertise was a lot more difficult to acquire than yours? So why is it fair to charge the same? For example, a doctor, you know? Years and years of training to acquire that expertise, or plumbing, or being a master electrician, for example. Years and years to acquire that expertise in contrast to, well, I'll just say, my pound cake is wonderful and delicious, but it didn't take me years to learn how to do it.

CAHN: Well, I was asked that question by a priest in South Korea. And I asked him, is my prayer worth more than the woman there who's sweeping the floor 'cause I'm a lawyer and she's only sweeping the floor? There are domains in our life - and this is, I think, the important thing about time banking - it's that it makes a statement that there are areas in our life that we know are more important than money. Not just our loved ones, but things like justice, the environment, the political process, social justice. The kinds of things that we think we're here to make the world a little bit better.

And that's not about money. Price, you see, values what's scarce. What I discovered was it devalues what's abundant, that's cheap. If it's really abundant, it's either dirt cheap or worthless, which means that every capacity that defines you and me as a human being is worthless. Every capacity that has enabled our species to survive - come to each other's rescue, care of each other - all those fundamental capacities that build civilization we have devalued. And so it's no wonder we're in a little bit of trouble.

MARTIN: And you've also said that this could be a way that people can pay off debts to society. For example, if someone has a criminal offense, rather than, you know, incarcerating that person, where that person is idle, this is a way a person could work off that debt by being of service.

CAHN: Well, you have right here in Washington something called a home comers academy where folks who have returned from prison are both enrolling as students, but they're on a service journey. And so they are providing safe passage to kids across gang territory. They are fixing up substandard housing, people in Section 8, and they're here to give back.

We have the largest youth court in the country is right here. So that offenders come before a jury of teenagers who are earning time credits. And they're sentenced to community service, to life skills. But they're also sentenced to jury duty. So 80 percent of the jurors are former offenders. They have reduced recidivism, frankly, well below 10 percent. They're doing more, in effect, for the rule of law, than some of my law students.

CAHN: The time banks just simply say if you're in debt and you owe, there's a limit to how much you can owe and for how long you can owe. So they make up their own rules. But, frankly, we have more trouble getting people to spend their time credits than to earn them. For the first 10 years, nobody who earned time credit spent more than 20 percent of them. So we had to find places who needed help, whether it's Head Start programs or hospital discharge programs or elder care programs. 'Cause the real problem is, given the choice, you'd rather say, am I needed than I need help. And so people would much rather earn than spend.

MARTIN: You haven't heard about my pound cake. So maybe - so once you've heard about it, that'd probably be on the list. But...

CAHN: Oh, that's going to be on the list. People don't know - I make silver jewelry. And the hours I put in are part of my time bank. I do a lot of gardening because it's my way of saying to the neighborhood, I want to give some beauty. And people come by and they do all kinds of wonderful things for me. I give rides. And sometimes some legal help and coaching. But I can't tell you I could cook a good pound cake.

Edgar Cahn is the founder of Time Banks USA. That's the organization that helps time banks start throughout the country. It helps them get started and provides advice and tools to time banks. In fact there's a time banking conference in Providence, Rhode Island at Brown University. And Edgar Cahn was kind enough to join us here in our Washington, D.C. studios. Thank you so much for joining us.

CAHN: Thanks so much.