Accessibility links
Ads Push For Middle Ground Amid Syrian Conflict Media professionals in Damascus who used to work on campaigns for breakfast cereals and home mortgages are now turning their talents toward a campaign they say promotes a peaceful, democratic way out of the ongoing clashes in Syria. The polarization in the country, they say, is profound. 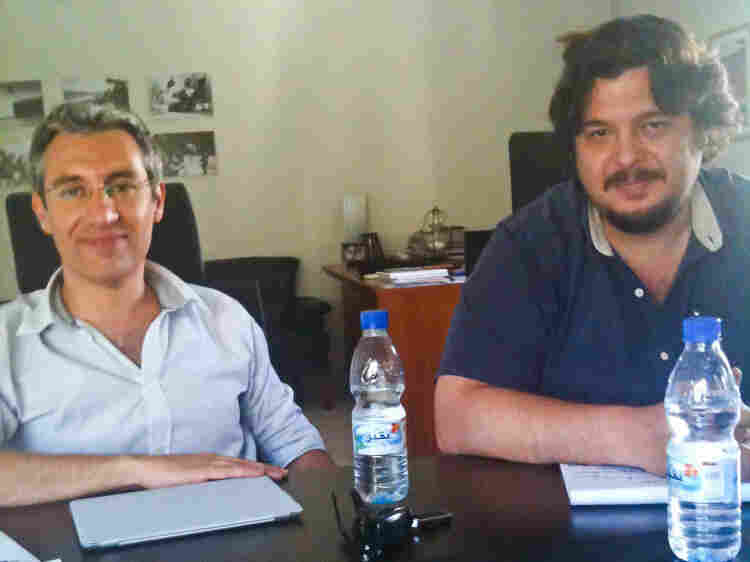 Ammar Alani (left) and Rami Omran created an advertising campaign in Syria with the help of friends in the media business, to call for a middle-ground solution to the ongoing crisis. Deborah Amos/NPR hide caption

The uprising in Syria is often described in terms of black or white — you either support the country's leader or you are a revolutionary.

But many residents of Damascus describe themselves as gray people, neither black nor white, and they're struggling to find a voice.

In the clutter of the modern city, one new advertising campaign stands out: the image of a great big raised hand. The billboards are along the highways, and around downtown markets and neighborhoods. The campaign is not selling a product, but an idea. "I'm for Syria," is the bold copy that underlines the hand.

"We're trying to defuse the anger/fear cycle here; trying to campaign and raise awareness about the middle ground," says Ammar Alani, who helped launch the campaign to support the middle ground with a group of friends — media professionals who usually create ads for breakfast cereal and home mortgages.

Alarmed by the polarization in the country, they paid for the billboards and donated their talents.

"The whole cost of the campaign was $4,000 that we split among us," says Rami Omran, who contributed the artwork.

"We [had] already been doing this for 10 years for other people," Alani adds. "The only difference now [is] the customer, if you like, is society; the brand is ... Syria and it needs promoting."

What they are promoting is a peaceful, democratic way out, they say. After 19 weeks, Syria is at a dangerous impasse. Protesters call for the downfall of the regime, but the opposition has offered no plan for what comes next.

Fears Of A Crash

Syria's president, Bashar Assad, has promised far-reaching reforms but has delivered nothing yet, and the killing continues. The middle ground is shrinking; polarization is profound.

"Actually I have friends in the same family that are polarized now, brothers," Alani says. 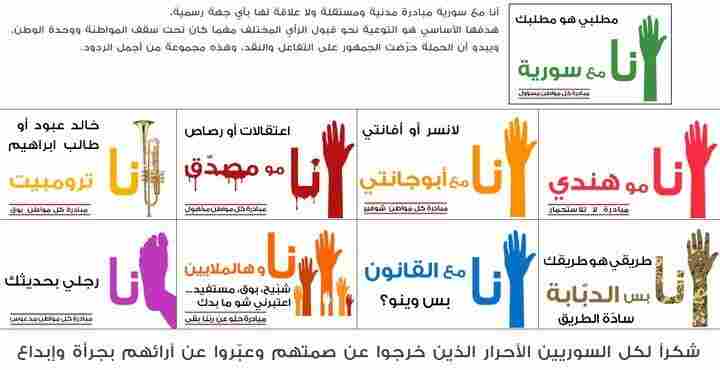 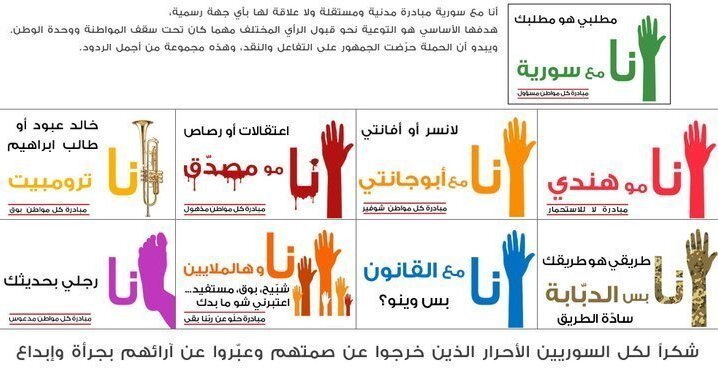 This ad offers some of the public responses to the initial "I am with Syria" campaign.

At the top, the ad says, "The goal of the initiative is to raise awareness and to accept different opinions." The campaign encouraged public interaction and criticism.

The red image illustrated with blood says in Arabic: "Arrests or bullets: I do not believe it." Another, in blue, says: "I am with the law, but where is it?" The text illustrated with camouflage reads: "My way is your way, but there's a tank in the way." The orange image with a group of hands says: "I am those millions: thugs, thieves, lackeys — call me whatever you want."

"We thank all the brave Syrians who broke the silence and expressed their views," the ad reads at the bottom.

"This polarization is like, 'Yes, we are going to crash, but it's your fault,' " Omran adds. "That doesn't matter if it's your fault or my fault; we are crashing all together, so let's stop the crash first."

The crash, as they see it, can come from the economy, or the sectarian divide. That was dangerously displayed in a bloody weekend in the city of Homs. There, an Alawite minority, backed by security forces, clashed with the Sunni majority protesting on Friday.

The crash can come also from a government that plays up those sectarian fears and after years in power seems unwilling to tolerate dissent, says Alani.

"It's not for the public, by the way — the public is getting this. We are having more [problems], actually, with the regime," Alani says. "They are the ones that we are trying also to include in the campaign. [They], as well, have to adopt this philosophy."

It's a philosophy of open discussion and dissenting views: something new to the regime, but crucial for a democratic system. The campaign has expanded to the Web, where young Syrians contribute their own punch lines to words that Alani has written.

"My way is your way ... but there's a tank in the way," Alani says, laughing. "This is the kind of engagement we are looking for. Let's disagree, but let's keep it in a positive, nondestructive method."

They agree this is a historic moment and there is no going back, but extremists now have the loudest voice. It's like a dangerous football final with the future of the country at stake, says Omran.

"In this 90 minutes, both fans are able to kill each other — before and after, they go and drink beer ... you know what I mean," Omran says.

But there's a difference between the protests and a big match: here, there's a lot of death and a lot of blood.

"It is harder because there is more blood," Omran says. "But at the same time, it's clearer now that the solution lies in the middle ground, in the rational democratic partnership, and not with ... one winner and one loser."

They say that they represent a third force: the silent majority of Damascus. Not with the protesters, nor the president. They say they offer the only hope for preventing the crash.