Accessibility links
Why Borders Failed While Barnes & Noble Survived It appears to be all over for the Borders bookselling chain. Almost 11,000 employees will lose their jobs when the company closes its remaining 400 stores by the end of September. Though the two chains pioneered the book megastore business 40 years ago, Borders made some critical missteps over the years that cost it the business. 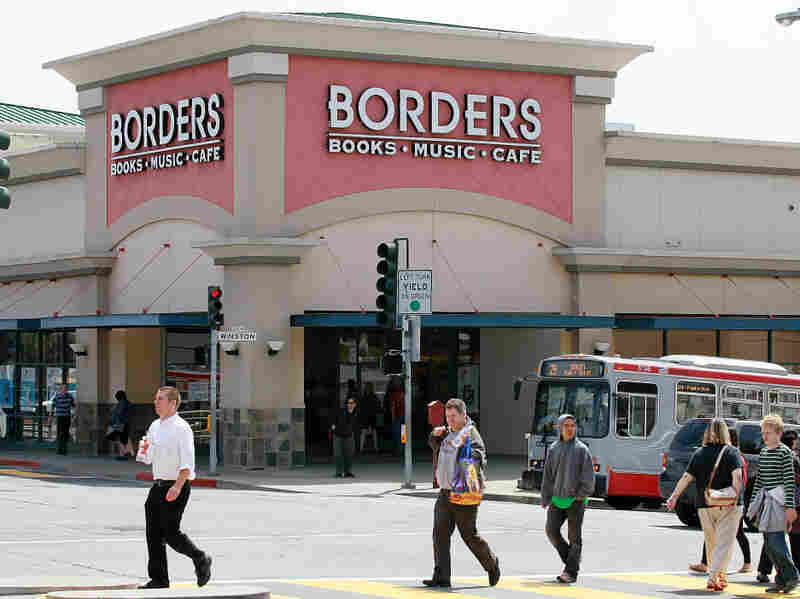 It appears to be all over for the Borders bookselling chain. The company will be liquidated — meaning sold off in pieces — and almost 11,000 employees will lose their jobs. The chain's 400 remaining stores will close their doors by the end of September.

The retailer's first bookstore opened in Ann Arbor, Mich., 40 years ago. Along with competitor Barnes & Noble, Borders pioneered the book megastore business. But Borders made some critical missteps over the years that cost it the business.

The vast tracts of retail space that Borders will soon vacate speak to a gargantuan business that essentially killed itself. At one time, size was its advantage. Borders built a reputation on offering a huge variety of books — tens of thousands of titles in a single store — at a time when most bookstores could afford to stock a fraction of that.

Borders also had an early technical advantage: a superior inventory system that could optimize, and even predict, what consumers across the nation would buy.

"It made a pretty big bet in merchandising. [Borders] went heavy into CD music sales and DVD, just as the industry was going digital. And at that same time, Barnes & Noble was pulling back," says Peter Wahlstrom, who tracks Barnes & Noble for the investment research firm Morningstar.

He says Barnes & Noble also invested in beefing up its online sales. Eventually, it also developed its own e-reader, the Nook.

Borders did not. Instead, it expanded its physical plant, refurbished its stores and outsourced its online sales operation to Amazon.

"In our view, that was more like handing the keys over to a direct competitor," Wahlstrom says.

"I'll go to Borders to find a book, and then I'll to go to Amazon to buy it, generally," customer Jennifer Geier says.

With so many people going online to buy books, Borders lost out. The last time it turned a profit was 2006. In February of this year, it filed for bankruptcy protection.

Those who bemoaned the rise of bookselling giants might see irony in Border's demise. With one of the major players gone, there might be some room, once again, for the little guys.

"I think there are a bunch of different niches around that can still be sustained, but I don't think there's a need for the mass-book seller to be as prevalent or as apparent as they were five or 10 years ago," Wahlstrom says.

Wahlstrom says Borders is disappearing at a time when, as consumers, readers are more empowered than ever. He says he still reads paper books but also reads on his iPhone, computer or tablet.

Dan Raff, a management professor at The Wharton School, argues that smaller-town America will suffer from the loss of a chain bookstore.

"The big-box store was a glorious thing while it lasted. To people in many parts of America, they were a kind of Aladdin's cave," Raff says. At Borders, people could access literary variety, contrary to smaller, independent bookstores.

With Barnes & Noble staking its future on digital technology, Raff says, it's likely the big bookstore will only live on in big cities.