Accessibility links
Rising Costs Complicate Vaccine Guidelines The group that advises the U.S. government on vaccination is finding itself in the difficult position of deciding not just how much good a vaccine can do, but whether it's worth the cost. 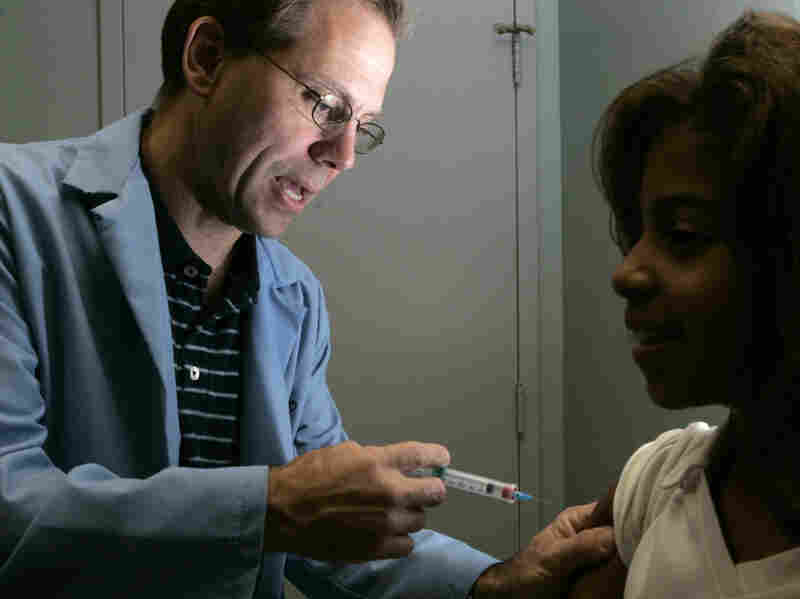 Dr. Donald Brown, left, gives 14-year-old Kelly Kent a dose of Gardasil, a vaccine for the human papillomavirus in 2006. The group that advises the U.S. government on vaccination recommendations is now starting to take costs for vaccines like Gardasil into consideration as vaccine prices rise. Charles Rex Arbogast/AP hide caption 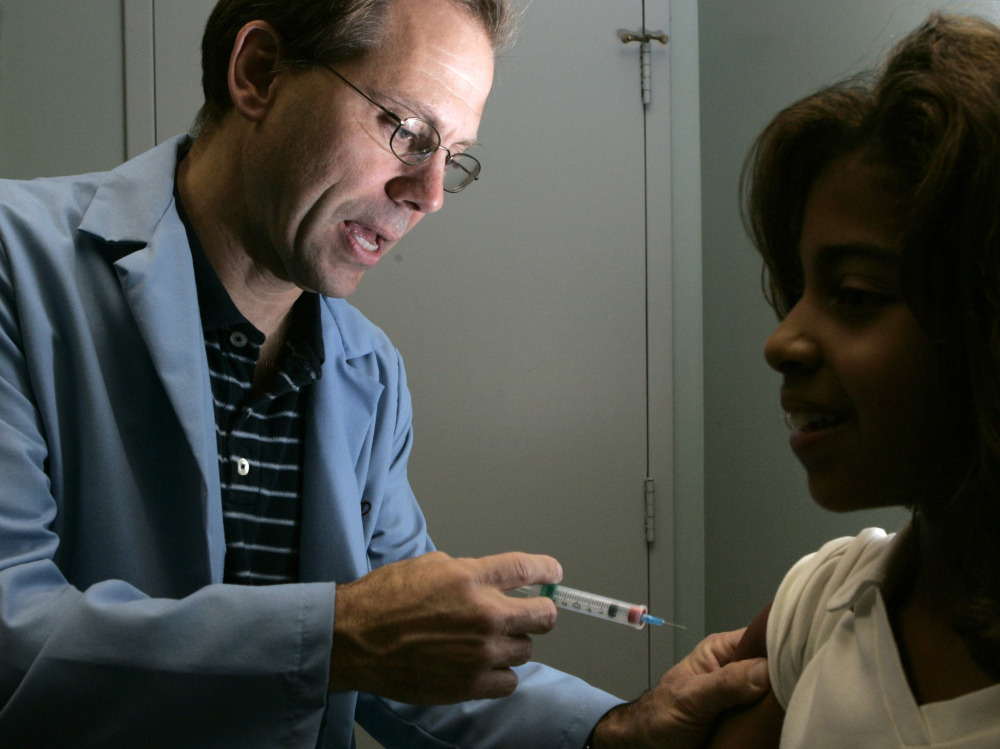 Dr. Donald Brown, left, gives 14-year-old Kelly Kent a dose of Gardasil, a vaccine for the human papillomavirus in 2006. The group that advises the U.S. government on vaccination recommendations is now starting to take costs for vaccines like Gardasil into consideration as vaccine prices rise.

The group that advises the U.S. government on vaccination thinks some new vaccines may not be worth the cost.

In 2009, the Advisory Committee on Immunization Practices, or ACIP, decided it's not cost effective to routinely vaccinate boys for human papillomavirus, though they do recommend the vaccine for girls. Now the group is struggling to decide whether infants and toddlers should get costly new vaccines to prevent a form of meningitis caused by bacteria.

The new emphasis on cost comes as vaccines are arriving that run more than $100 a dose, while only preventing illness in a relatively small number of people.

"In the 1980s, cost effectiveness, indeed even the cost of vaccines, just wasn't discussed," says William Schaffner, chair of preventive medicine at Vanderbilt University and an ACIP liaison representative from the National Foundation for Infectious Diseases. "Now it plays a regular and quite prominent role."

ACIP recommendations are used by both the government and private insurers to decide which vaccines they'll pay for.

The meningitis vaccines offer some insight into how things have changed at ACIP, Schaffner says. They protect people from bacteria that can cause meningococcal disease, which affects the blood and brain and can kill in hours. The disease is rare, but tends to strike young people, including babies and college students.

"If there's an illness that is highly notable and feared by the population, that's it," Schaffner says "No parent wants their child to have this illness."

So back in 2005 ACIP recommended that every adolescent in the U.S. get the vaccine. It costs nearly $100 a dose, which means hundreds of millions of dollars a year paid by the government and private insurers. But the bacteria cause illness in only a couple of thousand people in the U.S. each year, and that number was going down even before the vaccine arrived.

So that makes vaccination is a very expensive way to save lives, says Schaffner, who is part of an ACIP work group studying the meningococcal vaccine

"Curiously, the cost-benefit analyses regarding the use of meningococcal vaccine are usually acknowledged but put to the side, Schaffner says. That's what happened in 2005, when ACIP members recommended routine vaccination for adolescents.

But cost got a lot more attention late last year after it turned out that young people would need a booster shot after just five years. At an ACIP meeting in October, committee members and public health officials spoke repeatedly about the money involved.

"Is it appropriate to almost double the amount of money spent on this program?" asked ACIP member Cody Meissner, a professor of pediatrics at Tufts Medical Center in Boston.

Other speakers noted that it would cost $189 dollars per vaccination and that the annual cost to the government alone would be $387 million dollars. All that spending would prevent just 23 deaths, they said.

Ultimately, ACIP went ahead and recommended the booster. But the cost discussion has only become more intense. At an ACIP meeting in February, CDC director Thomas Frieden told members that his agency now spends more than $3.5 billion a year on vaccines for children. And he made it clear that he's frustrated by the rising costs.

"Most newer products and new formulations of old products have come at substantially higher prices," Frieden said. "And we've also seen prices rising after initial federal contracts were set and prices failing to fall when vaccine schedules are compressed or a second vaccine manufacturer enters the market. These are not things we would expect under normal economic conditions."

A Dollar Value On Death Or Disease?

For their part, manufacturers say most vaccines still aren't very profitable. They also note that when prices were lower, companies stopped developing new vaccines or simply got out of the vaccine business.

So now ACIP members find themselves in the difficult position of deciding not just how much good a vaccine can do, but whether it's worth the cost. To help, they've begun to include presentations by experts on cost-effectiveness in their deliberations.

But experts can't solve the fundamental problem of how to put a dollar value on preventing death or disease, says Mark Pauly, a health economist at the University of Pennsylvania.

One solution would be to have federal elected officials draw the line, and simply ask ACIP to apply it, Pauly says. "Ultimately the buck has to stop at the legislature," he says.

But lawmakers don't seem eager to get into the rationing business. And the nation as a whole seems unwilling to engage in what Pauly calls the "adult conversation" about how much is too much for a vaccine.

So it may be up to ACIP. And the meningococcal vaccine may be what forces the issue. In April, the FDA approved a two-dose version for infants and toddlers. That means it will soon be possible to protect even very young children.

That could prevent dozens of infants from getting sick and a handful from dying. But the cost of establishing and maintaining that protection will be high — perhaps more than $1 billion a year.

And the committee that's been studying the problem for ACIP has been hinting that it feels the cost of the vaccine is too high.

"We are drifting slowly to a conservative position which is, maybe it doesn't have to be recommended universally," Schaffner says.