Accessibility links
Does British Scandal Risk Murdoch's Hold On Empire? So far, the crisis under Rupert Murdoch's leadership has been costly. It killed a $12 billion bid of the largest broadcaster in the U.K. The company's shareholders lost billions of dollars in market value. The News of the World was closed forever, and there are a series of criminal investigations. 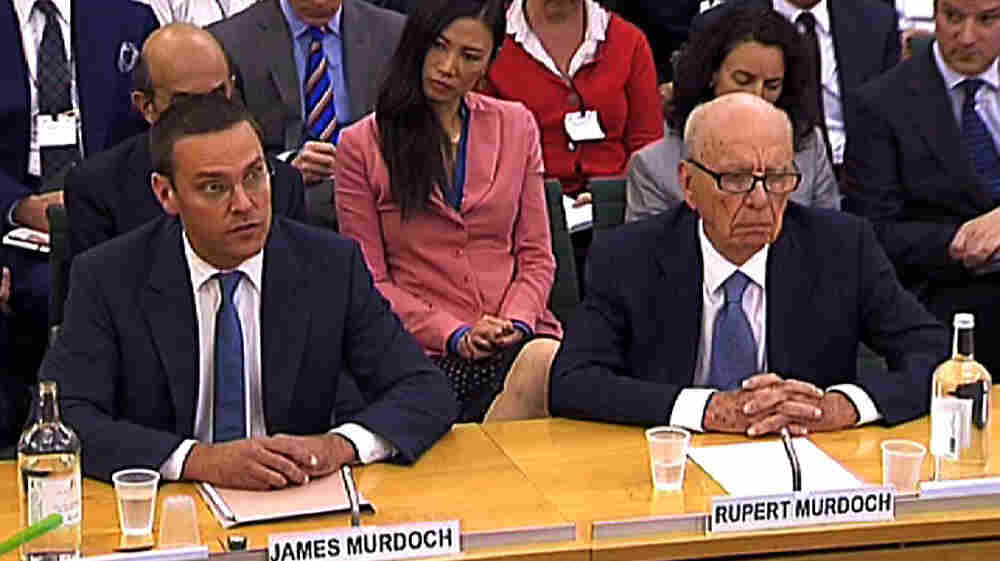 News Corp. CEO Rupert Murdoch (right), testifying alongside his son James, said his appearance Tuesday before a British parliamentary inquiry in London was "the most humble day of my life." Parbul/AFP/Getty Images hide caption 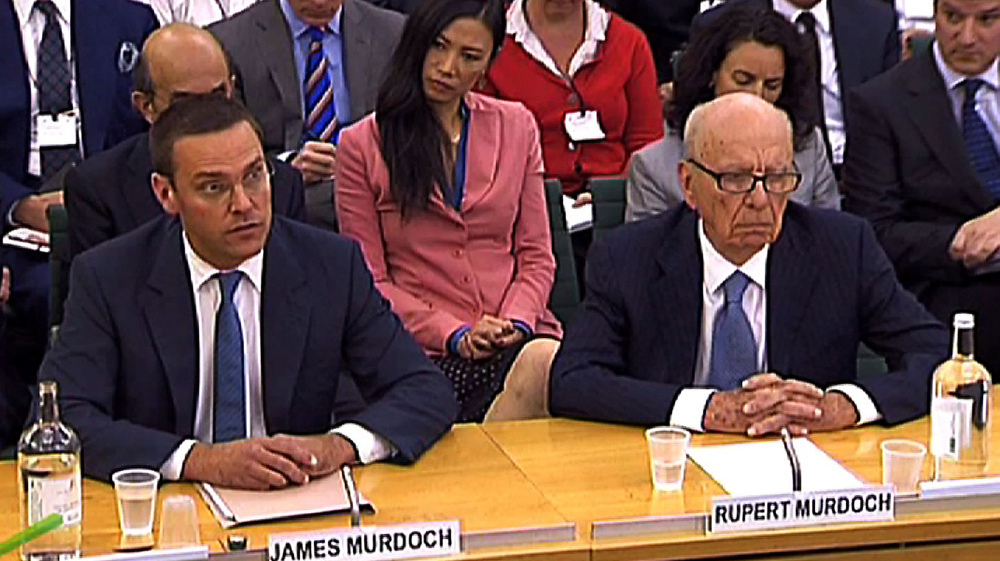 News Corp. CEO Rupert Murdoch (right), testifying alongside his son James, said his appearance Tuesday before a British parliamentary inquiry in London was "the most humble day of my life."

As News Corp. executives Rupert and James Murdoch gave testimony to members of a parliamentary panel in London on Tuesday, they were also speaking to a different audience: The people who own their company's shares and sit on its board.

From the opening moments, Rupert Murdoch made clear that even in crisis, News Corp., while a publicly traded company, is very much propelled by the vision of one man. He interrupted his son James to make the point.

"I'd just like to say one sentence: This is the most humble day in my life," he said.

The problem for the Murdochs is fundamental. They've made a lot of money for shareholders. But if they knew what was going on, they either condoned or ignored what are likely crimes.

Rupert and James Murdoch repeatedly said Tuesday that they did not know what was happening well below them. In that case, why would anyone want them to run the company?

Tom Watson, a member of Parliament from the opposition Labour Party, asked the senior Murdoch why News Corp. didn't instantly investigate reports that the paper's reporters bribed police for information.

"I didn't know of it. I'm sorry," Rupert Murdoch said. "If I can just say something, and this is not as an excuse, maybe it's an explanation of my laxity: The News of the World is less than 1 percent of our company. I employ 53,000 people around the world who are proud, and great and ethical and distinguished people."

The paper was just a rounding figure in his company's bottom line — and perhaps therefore not deserving of his full attention. Yet Murdoch is not known for laxity. He's known for being hands-on.

On Tuesday, he deflected questions to James Murdoch. The onetime heir apparent faced his own difficulties. The scandal first erupted five years ago after complaints from Princes William and Harry of phone hacking. The paper's royals editor and private eye went to jail. It was an isolated case, the company said then.

James Murdoch testified that he was jarred by evidence in a lawsuit filed by movie star Sienna Miller.

"As soon as we had that new information at the end of 2010 — that indicated to us there was a wider involvement — that we acted upon it immediately," James Murdoch said.

But the year before — in 2009 — the Guardian newspaper's exposes indicated that dozens of celebrities and politicians had been illegal targets of the tabloid. James Murdoch himself had approved a secret payment of more than $1 million to settle a professional football figure's complaints.

Louise Mensch, an MP from the governing Conservative Party, directed Rupert Murdoch to the resignation of the publisher of one of his New York-based newspapers. Les Hinton, formerly CEO of Dow Jones and Co., which publishes The Wall Street Journal, had previously been head of News Corp.'s British papers.

"Is it not the case, sir, that you are the captain of the ship?" Mensch asked. "You are the chief executive officer of News Corp., the global organization."

"It is a much bigger ship, but you are in charge of it," Mensch said. "And as you said in earlier questions, you do not consider yourself a hands-off chief executive. You work 10 to 12 hours a day. This terrible thing happened on your watch. Have you considered resigning?"

Murdoch said he hadn't, and the buck stops somewhere else.

"People I've trusted — I'm saying not who, I don't know what level — have let me down, and I think they behaved disgracefully, betrayed the company and me, and it's for them to pay," he said. "And frankly, I'm the best person to clean this up."

So far, however, crisis under his leadership has been costly. It killed a $12 billion bid of the largest broadcaster in the U.K. The company's shareholders lost billions of dollars in market value. The News of the World was closed forever, and there are a series of criminal investigations.

Now the board's independent directors have hired their own lawyers to represent their interests.

The News of the World was less than 1 percent of News Corp., but it could — just could — drag the company out of the Murdochs' grasp.