Accessibility links
How Rick Perry Could Shake Up The GOP Race Will the three-term Republican Texas governor, a favorite of evangelicals and the Tea Party faithful, elbow his way into the crowded presidential race? Longtime Perry watcher Evan Smith of the Texas Tribune talks about why he thinks Perry will run and what kind of candidate he'd be.

Texas Gov. Rick Perry is the latest Republican to tantalize the restive party base with the prospect of a 2012 presidential run.

The three-term governor, a favorite of evangelicals and the Tea Party faithful, has been meeting with potential donors and ramping up his public profile. He has also scheduled an attention-getting prayer event at a Houston stadium in August. 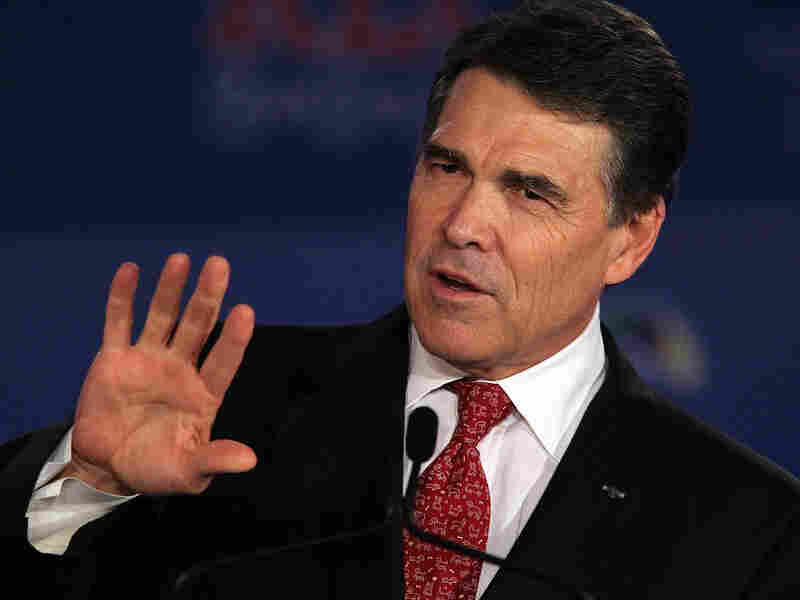 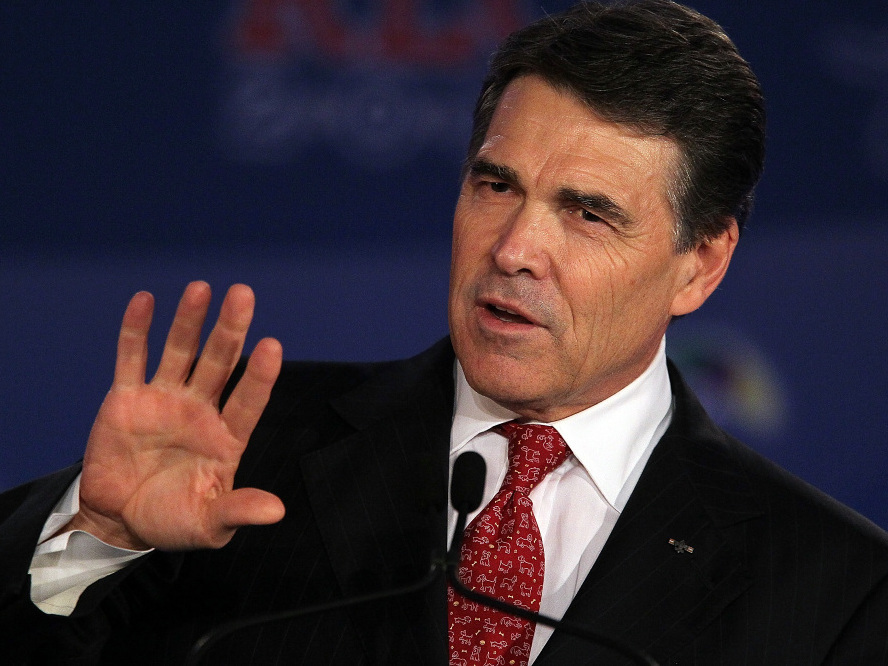 Earlier this month, Perry told the Des Moines Register that he's getting "more comfortable every day that this is what I've been called to do."

This week, Perry remarked that he has no interest in serving as vice president, which only heightened speculation that he has his eye on another prize. And he has said that his wife has urged him to consider entering the race, ruling out one typical excuse for sitting out a presidential campaign.

Poll results released this week suggest that if Perry decides to muscle his way into the crowded GOP field, he could be off and running with the big dogs.

And a Gallup Poll, also released this week, found that even though more than half of those surveyed still hadn't heard of Perry, those who did expressed positive feelings about him.

It would be the head fake of all time if he were not running.

The view from his home state is that Perry, a onetime Democrat who supported Al Gore for president in 1988, is looking pretty close to a sure bet to run for the GOP nomination.

NPR spoke with the Texas Tribune's Evan Smith about the man he has followed since the early 1990s. A former editor of Texas Monthly magazine, Smith says he is convinced Perry will make a run at the White House and tells us why other Republican hopefuls should be worried.

Liz Halloran: Gov. Perry plans a day of prayer and fasting Aug. 6 at Reliant Stadium in Houston, courting the same evangelical base that Rep. Michele Bachmann has notably attracted. What would you say to non-Texans wondering how Perry's religion informs his politics?

Smith: He's a man of faith who has always walked a line between understanding that faith is personal and private and believing that one's faith informs one's style and substance of governance. This state has probably many more people who share the governor's view of faith and its role in the public conversation than [do] other states. His decisions in public life have not been expressly tied to matters of faith, but there's no question that his belief in God has informed a lot of the work he's done.

Halloran: Could you give me an example?

Smith: He is as vehemently pro-life as any governor in this country and I think his faith is absolutely part of what got him to that place. That's an issue on which there is no mistaking the relationship between his personal views and his political views.

Elected as a Democrat, switched parties in 1989

Chairman of the Republican Governors Association, which he previously led in 2008

Halloran: Perry touts the Texas economy as his major selling point. He has said that Texas is a place where jobs are welcome, taxes are low, and regulations are predictable. If you scratch the surface, how does that narrative hold up?

Smith: The reality is Texas didn't avoid the recession. It simply weathered it better than many of the other states. To that degree, the governor probably has something to crow about, because if you're the guy in charge when things go well you get the credit for it even if you don't deserve it. The governor can credibly claim that the decade he's been in office Texas has created more jobs than all other 49 states combined. That's a record, at least on paper, that you could imagine a presidential campaign pivoting off of.

Halloran: What about criticisms that the jobs created have been overwhelmingly low-paying?

Smith: Critics of the governor will tell you that many of those jobs were not terribly high-paying jobs. And that because the state took a lot of federal stimulus money to backfill deficits over the last two legislative sessions the economic health of the state is not exactly as the governor says. But Texas has, with low taxes and low regulation and an emphasis on tort reform law, created a climate in which businesses feel they can relocate here, hire here, and do their work.

Halloran: The governor's style on the stump has been characterized as occasionally bordering on the antic. He drew considerable attention a couple years back when he appeared to suggest that state secession wasn't out of the question. What might he bring to the campaign trail that hasn't been brought by the Mitt Romneys and the Tim Pawlentys of the field?

Smith: The governor never endorsed secession. What he did was legitimize a discussion about the degree to which, if the federal government won't get its boot heel off the necks of Texas, Texans should revolt. Remember when this was — April 15, Tax Day of 2009. It was before the summer of "death panels." It was before the Tea Party really came into its own as a movement. The governor has remarkably good political instincts. He anticipated this pitchfork-and-torches wave of resentment of the federal government, of the 10th Amendment being waved around as a bloody shirt.

Halloran: How might he match up on the trail against President Obama?

Smith: Arguably, the governor and the president have nothing in common except for this: They're extraordinary politicians and campaigners. This governor connects with voters of all sorts around Texas better than just about anybody I've seen running at that level here. He can be antic; he can be manic. But it has been a mistake over his career to underestimate him, and it will be a mistake for either Republicans in the primary, or the president, to underestimate his abilities as a campaigner.

Halloran: Texas Monthly writer Paul Burka, in a definitive piece about Perry last year, referred to him as an accidental governor who has managed time and time again to be in the right place at the right time. Why might this be the right place, the right time for a Perry presidential candidacy?

Smith: There's a hole in the Republican primary field you could drive a truck through right now. There's nobody in that field who specifically appeals to evangelicals. Even Bachmann is problematic as a candidate because her electability is in question. Evangelicals are looking for a candidate. Southerners are looking for a candidate. The Tea Party, the basis for so much of the momentum for the Republicans over the last couple of years, doesn't really have one. If Perry enters this race, he does so knowing that there are an awful lot of important folks within the Republican primary base who don't feel like they have a candidate right now, and he checks a lot of those boxes.

Halloran: But how would he fare in a general election, which will be decided by independent voters, not the GOP base he appeals to?

Smith: The challenge for him is bound to be whether the conservatism that he embraces plays well elsewhere, and whether there are enough people in enough states — some of them blue and some of them purple — to get him to the finish line. He has not been inclined to tack back to the center in any of the races he has run at general election time, mostly because Texas Democrats have been so enfeebled since 1994 that he's never really had a serious general election challenge.

Halloran: There's been much made about the antipathy in Texas between the so-called Bush country-club Republicans and the Perry wing of the state party. What was the genesis of that bad feeling and how do you think that might play out if he decides to run?

Smith: Remember that Rick Perry loosed this on the world himself when he endorsed Rudolph Giuliani for the Republican primary nomination in 2008. He was campaigning with Giuliani in Iowa and famously said that George W. Bush was not really a fiscal conservative. A telling moment was in the 2010 Republican primary for governor when Kay Bailey Hutchison, the senior U.S. senator for Texas, was running against Perry. Practically all of the old Bush folks — Jim Baker, Karen Hughes, and on down — they all supported Kay. They just don't think that Perry's their kind of guy. His political style is not their political style. His ideological style is not their style.

Halloran: Is the rift overstated?

Smith: Some Bush people say it's overblown. The view we have on it from the ground is that it is not overblown. The degree to which the Bush people decide to play in this next presidential race is going to be interesting. Are they going to come out and actively support a non-Perry candidate, or are they just going to stand down?

Halloran: Do you think Perry will run?

Smith: I don't think there's any question. It would be the head fake of all time if he were not running.