Accessibility links
Rebels In Western Libya Train For Move On Tripoli Rebel commanders in the western mountains of Libya say they are supplying dissident forces in Tripoli with weapons in advance of a march on the capital. It's not clear how feasible their plan is, but interviews with residents who have fled suggest that Gadhafi's hold on Tripoli may be weakening. 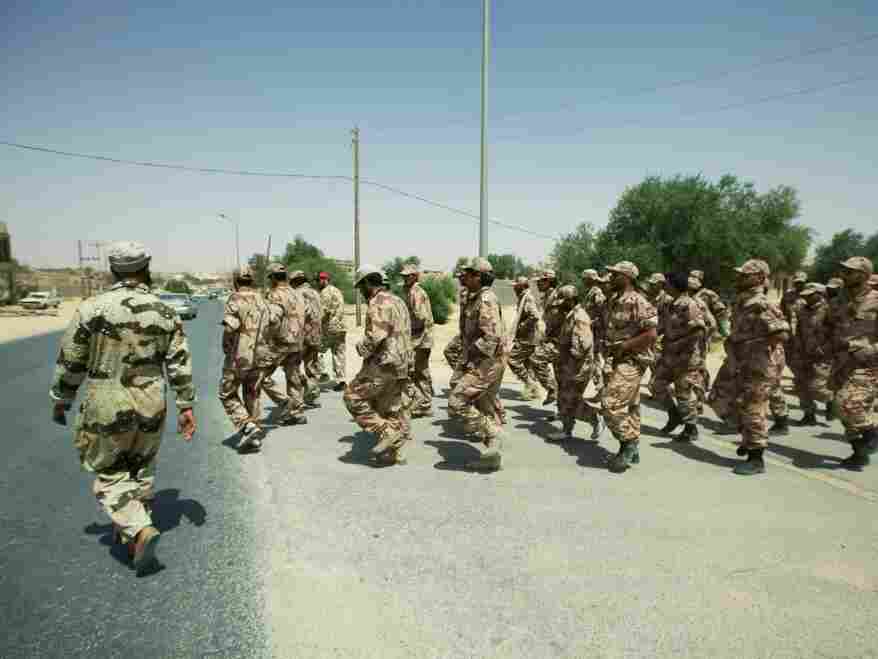 Specially selected rebel fighters march through the streets of Zintan, Libya. These rebels will be trained in urban combat in anticipation of an expected move toward Tripoli. Jonathan Levinson for NPR hide caption

Rebel commanders in the western mountains of Libya say they are supplying anti-government forces in Tripoli with weapons in advance of a march on the capital.

Claims like this have been made before, and there are still few signs that the rebels can take Moammar Gadhafi's stronghold city. Still, interviews with Tripoli residents who have fled to the western mountains in recent days suggest that Gadhafi's hold on the capital may be weakening.

In the western city of Zintan, the rebel army's elite force marches in formation down the main street, training for urban combat. Their commander, Abdul Hamid, says they are being taught guerrilla warfare and street fighting.

Now that they will be moving out of the mountains and toward Tripoli, Hamid says, they need to change their tactics.

Rebel leaders in Zintan say they are in touch with rebel sympathizers in Tripoli.

"Just now, we supplied some weapons [and] some equipment — just guns and phone satellite," says Col. Juma Ibrahim, one of the heads of the military council in Zintan. "Groups which I have contact with them — I told them, 'Stay, don't move ... wait.' "

Ibrahim says the plan is to coordinate an assault with dissident cells in the capital. But what's not clear is how feasible that really is.

Rebels here have been making steady but slow progress against Gadhafi's forces, though they do lack manpower and supplies. And families who recently fled the capital say Gadhafi's grip on Tripoli may be less secure than it once was. 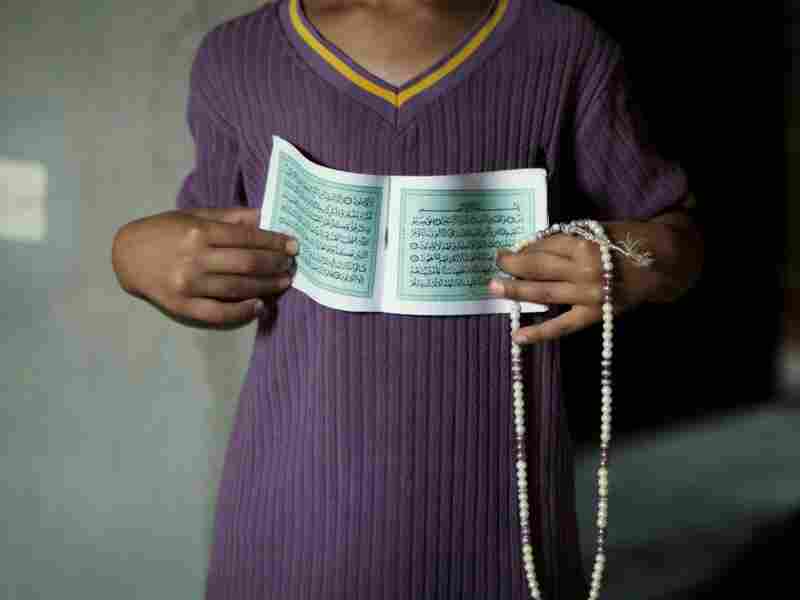 A Zintani family had been living in Tripoli but fled because of violence and instability in the capital. Here, one of the children shows the family's Quran and prayer beads, two of the few possessions they brought with them from Tripoli. Jonathan Levinson for NPR hide caption

The people interviewed by NPR for this story asked not to have their names used for fear of reprisals against relatives still living under Gadhafi's control. Their claims are impossible to verify independently.

Members of one family are taking shelter in a bare house with no electricity. They left Tripoli with only a few belongings, telling no one they were going.

A man in the family says that he lived near the restive Tripoli neighborhoods of Tajoura and Souk al-Juma, and he's friends with many of the activists there. He paints a picture of a city where order is breaking down.

He says that gangs of plainclothes thugs empowered by the secret police set up checkpoints; many simply steal money and cellphones. At night, gunfire crackles through the streets as anti-government fighters attack loyalist forces.

At one checkpoint near his house, two Gadhafi loyalists were killed and their vehicle destroyed in one such exchange. Gas and food shortages have left the population ever more restive, he says. And smaller acts of defiance are a regular occurrence — for example, people launch balloons painted with rebel flags.

But there is still a culture of fear, he says. Anti-government cells in Tripoli are scattered and disorganized, with few weapons or means of communication. The lack of fuel also means rebels can't move around.

Arrests are still taking place, he says. A few weeks ago, the son of one of his neighbors was picked up and imprisoned for suspected rebel sympathies.

Waiting For The Rebels

But it's not only adults that are targeted. Schools were still open in the capital until the end of May. One 12-year-old boy tells NPR that any children caught painting the rebel flag or making anti-Gadhafi statements would be reported and their parents taken away. The boy says he would regularly be called a rat and a traitor because his family is originally from the rebel-held western mountains.

The boy's father says he told all three of his children not to talk about politics in public.

Members of another family who also recently fled Tripoli tell similar stories of being targeted because they come from Zintan.

The patriarch of the group says there is no doubt that Gadhafi's forces still control Tripoli, but most of the people there are against him. He says they are just waiting for fighters from Zintan or Misrata to make their way to the capital.

He says the day is coming when Tripoli will rise up again — it's only a matter of time.