Accessibility links
Hot, Hotter, Hottest: Nation Sweats It Out A combination of stagnant heat and humidity has prompted some type of heat advisory in more than 30 states. Temperatures will reach well into the 90s or even top 100 degrees in much of the U.S. Thursday and Friday — and overall temperatures are likely to be the hottest since 1950, one expert says. 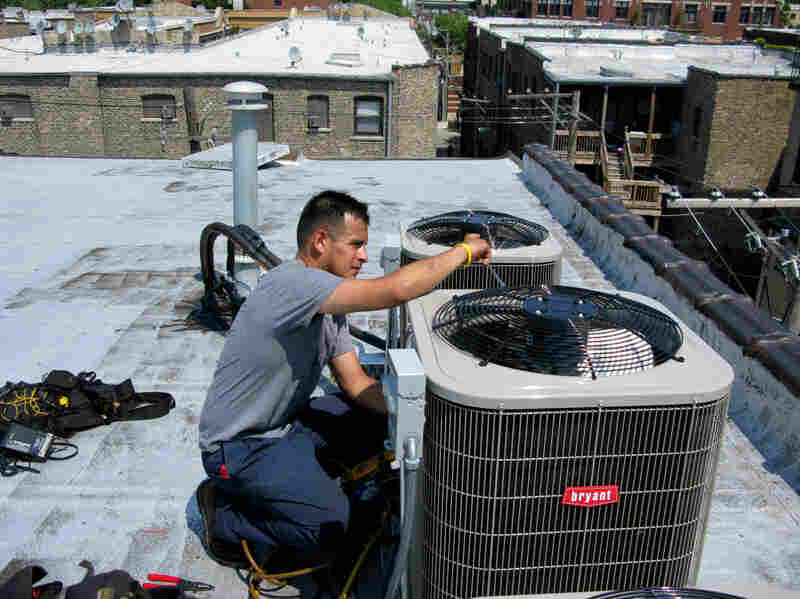 Eric Rebolledo, a repairman for AllTemp heating and air conditioning in Chicago, works on an air-conditioning unit on the roof of an apartment building. "I don't remember it being this hot for at least 10 years that I can recall," he says. "This is unusual, man, so it's gonna create some havoc with the air-conditioning systems." David Schaper /NPR hide caption

It will be intensely hot again Thursday in many parts of the country. From the South and the Midwest to the East Coast, temperatures will soar again into the 90s and could top 100.

Heat advisories were issued in at least 27 states. Officials say at least 22 people have died from heat-related illnesses. For many, it will likely remain hot and humid for several more days to come.

Eric Rebolledo was on top of the sun-baked roof of an old greystone 3-flat on Chicago's North Side, sweltering as he kneeled alongside a sputtering air-conditioning unit that was not cranking out the cool air that it should.

The repairman for AllTemp Heating and Air Conditioning has been doing this a lot lately.

"Long hours, hot days, man," he said. "Up in the roof, it's usually pretty hot, man, but try to hydrate, you know, make sure you drink enough water. Got a cooler in the truck."

The high temperature in Chicago on Wednesday was 99; the high humidity made it feel like 110. Rebolledo said the heat was crippling many air conditioners.

"We're getting a lot of breakdowns just due to the hot weather," he said. "Instead of running only 6 hours a day, they're running 12, 13, 15 hours a day. These air conditioners are definitely taking a beating these last couple of days."

Rebolleda was working 12-hour shifts and his company has repair crews available 24 hours a day, seven days a week. He said understood his job had an extra level of urgency to it right now.

"We got to provide the service, when it's needed," he said. "I got a lot of elderly customers and this weather can definitely be deadly."

The heat turned deadly in some parts of the Midwest: In Kansas City, where the heat wave is entering its 10th day, Mayor Sly James said heat appears to be a factor in the deaths of at least 13 people.

"Generally, the folks who have died have been those who have been less able to protect themselves against the heat for lack of air conditioning, fans, cool places, those types of things," James said. "And those folks who are often elderly, or concentrated in high rises, or in places where there are pockets of poverty."

In Kansas City, Chicago and other cities, officials made door-to-door well-being checks on older residents and those with health problems. People were being asked to check on their neighbors, and cooling centers were open for people without air conditioning.

Kim Kristensen, an in-home-care nurse in Madison, Wis., has been checking in with the elderly.

"The one client that we are really worried about are the elderly population who unfortunately don't have any assistance. ... They're very much at risk in this hot weather," she told NPR's Michele Norris.

Still, hospitals around the Midwest reported seeing scores of patients with heat-related illnesses, including heat stroke and dehydration.

Melissa Eland was carrying three water bottles, trying to stay cool, as she walked to class at Indiana University.

The heat was also putting a huge demand on the nation's power grid, leading to scattered power outages.

"It's going to mean elevated power demand for an extended period of time for a lot of people," said Travis Hartman, the Energy Weather Manager at MDA Earthstat, which proves forecasts for utilities and other weather-dependent businesses.

Nationwide, Thursday and Friday will be hotter than any time since 1950, he said.

Hot pavement was buckling on some highways. The hot weather was also baking some crops.

"What happens when plants get heat stressed and water stressed is they get curly leaves like this," said Curtis Millsap, who owns and operates an organic farm outside of Springfield, Mo. He said this summer's heat is much earlier and much more intense than usual, leading to wilting lettuce and fewer vegetables.

Pointing to some blossoms, he said, "They should stay on there and become cherry tomatoes, and they're just falling off. It's too hot for them."

For many farmers, the heat adds insult to injury. Flooding and a cold wet spring led many to plant late. Now their corn, wheat and other crop yields might even be smaller.

Dairy production is down, too, as hot cows don't give as much milk.

It's so hot in some areas, livestock are dropping dead: At least 1,500 cattle in South Dakota died because of the heat, as did some dairy cows in Wisconsin and Minnesota, and thousands of chickens and turkeys on poultry farms from Kansas to North Carolina.

Temperatures are expected to cool a bit Thursday in some parts of the Midwest, if you can call the upper 80s cool, but they will only rise in the East as the heat dome covering much of the country slowly moves that way.

"This is going to cover basically all of southern New England, getting up into southern New Hampshire all the way back towards New York and down along the Mid-Atlantic Seaboard," he said.