Accessibility links
Violence At Calif. Mental Hospitals: 'This Is The Norm' Thousands of assaults occur each year at California's state psychiatric hospitals. Last year, a staffer was killed at Napa State Hospital. Employees there demonstrated, demanding greater safety. Now, protests have spread to a hospital near Los Angeles, where workers say it's not if you get assaulted, it's when. 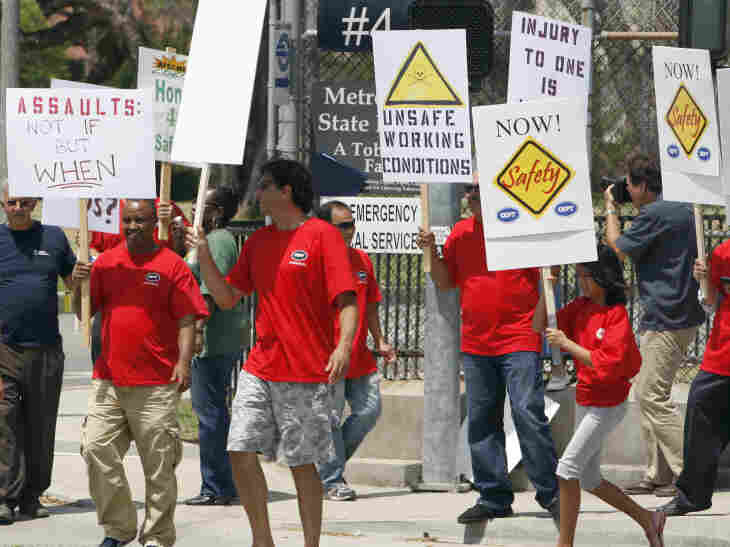 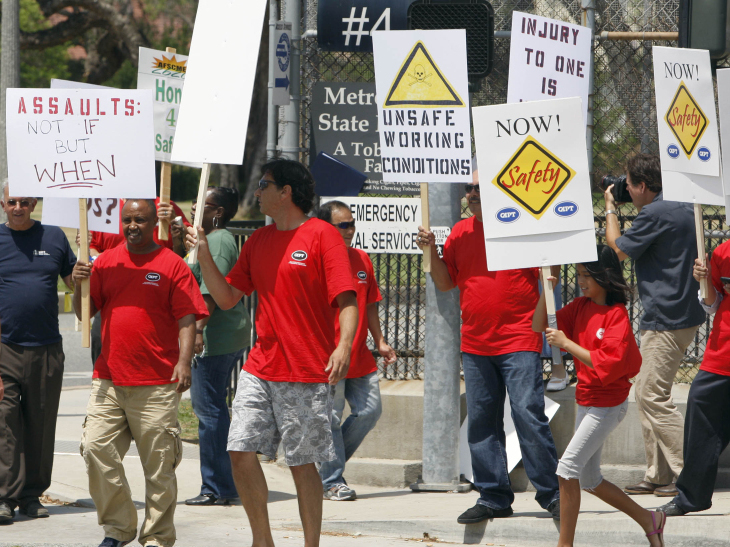 Metropolitan State Hospital employees and supporters gather outside the gates of the hospital in Norwalk, Calif., earlier this month to protest repeated assaults at the hands of mental patients and what they call dangerous working conditions.

Now, the protests have spread to Metropolitan State Hospital near Los Angeles, where about 100 workers recently spent a broiling hot lunch hour marching in front of the place where they work.

Psychiatrist Laura Dardashti, who has worked at Metropolitan since 2006, says that when she started, co-workers told her, "It's not if you get assaulted — it's when."

Her turn came about a year and a half ago.

"I was attacked by an extremely psychotic patient who grabbed me by my hair and had me down ... in a pretty significant headlock," she says, "and it took about four staff to get her off of me."

But that wasn't the worst part: "I remember driving to work the next day with a wave of panic coming over me and tears welling up in my eyes, thinking, 'I don't know how I can do this.' "

But, she says, "I think with time, you forget. And there's a sense that somehow this is the norm."

Here's what state statistics say about "the norm" at Metropolitan: Last year, staff members were attacked by patients more than 1,300 times — nearly double the number of assaults from the year before. Meanwhile, patients assaulted other patients at a rate of almost seven times a day.

"And what does the hospital do: They make excuses. They say it's a budget issue. That's not OK." And not only are the staffers affected, she continues, "the patients are assaulted. The patients are being re-victimized."

Metropolitan Hospital's medical director, Dr. Michael Barsom, says there's no conflict between management and staff on what should be done.

"I think the conflict, as it were, arises from what is feasible to be done," he says. "So to hire more staff, to hire more police officers, to implement an alarm system are very expensive items. And we're limited in what we're able to do."

Because as pretty much everyone knows, California is hard up for cash. The budget that was passed last month made painful cuts to just about everything. The state psychiatric hospitals, however, got $10 million more than last year.

On the one hand, that's amazing, says Diana Dooley, the secretary of California's Health and Human Services Agency. On the other hand, she says, "$10 million isn't enough; $100 million wouldn't be enough in terms of the advocates of the patients and the workers and the need."

But she says $10 million is enough to begin improving safety. For starters, the hospitals have been exempted from a statewide hiring freeze and are adding staff. A new alarm system is about to be tested, and a new department will be created to focus solely on the hospitals.

"But the problem has existed for a very long time," she says, "and we're not going to dig out of this hole as quickly as everyone would like us to do."

Some state lawmakers are nearly as impatient as hospital workers. They've introduced at least five bills that are designed to make the hospitals safer. Metropolitan State Hospital is in the district of Assemblyman Tony Mendoza. His chief of staff, Sharon Weissman, had this message for the demonstrators:

"Assembly Member Mendoza and I are both state workers. And you do not deserve any less safety when you go to work each day than we do."

Weissman said lawmakers will try to figure out what's causing the surge in hospital violence — and how to stop it — at a hearing next month.