Accessibility links
Teacher Becomes Unwitting Drug Smuggler Ana Isela Martinez Amaya was on her way to work in El Paso, Texas, where she had just been named Teacher of the Year, when border police in Mexico found two suitcases full of drugs in her car. It looked like she could have spent years in jail — until FBI agents uncovered a complex, car-tracking drug operation. 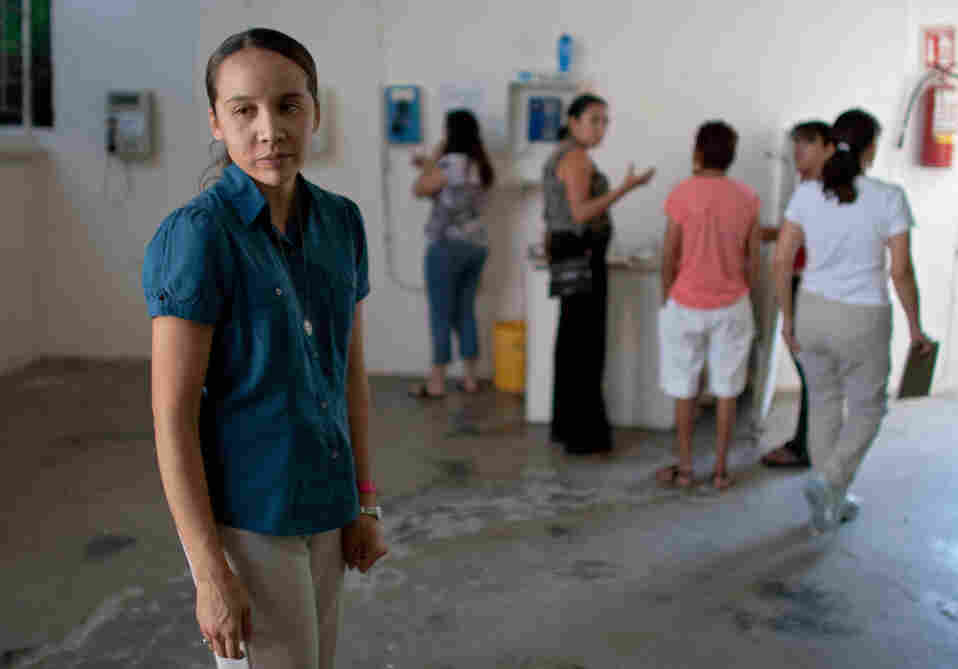 Ana Isela Martinez Amaya, a teacher at an El Paso school, spent more than a month in a Juarez jail after Mexican police found drugs in her car at the Mexico-U.S. border crossing. But FBI agents uncovered a complex drug operation that involved tracking Ford cars and copying their keys. Their investigation ultimately led to charges against Martinez being dropped. Jesus Alcazar/AFP/Getty Images hide caption 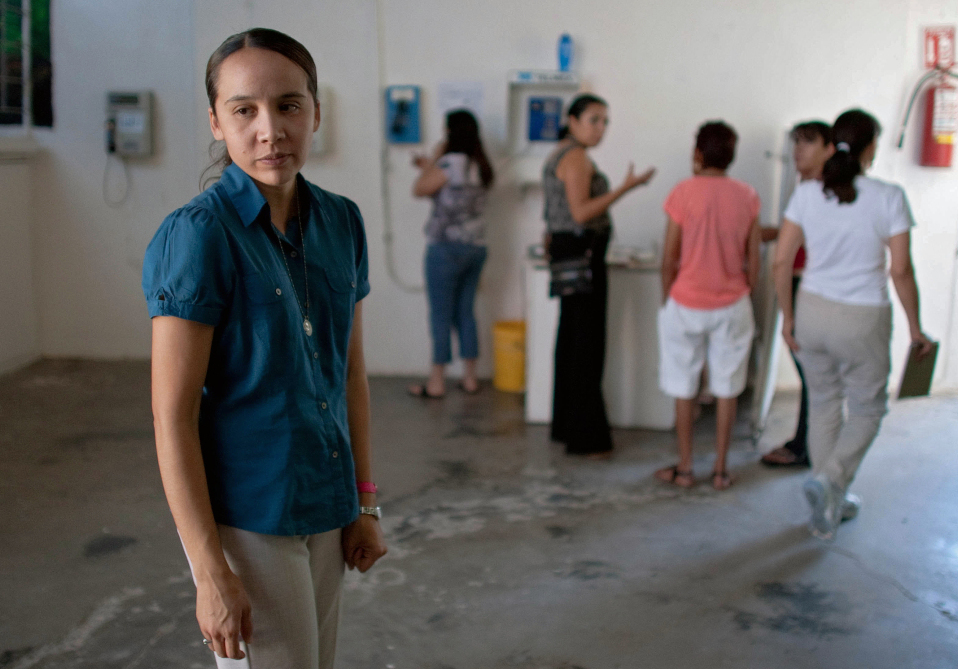 Ana Isela Martinez Amaya, a teacher at an El Paso school, spent more than a month in a Juarez jail after Mexican police found drugs in her car at the Mexico-U.S. border crossing. But FBI agents uncovered a complex drug operation that involved tracking Ford cars and copying their keys. Their investigation ultimately led to charges against Martinez being dropped.

For Ana Isela Martinez Amaya, May 26 began like any other school morning.

Martinez got up at 5:45 a.m. and got her 6-year-old daughter ready for school. At 6:30, the two of them left their house in Ciudad Juarez, Mexico, in a tan 2003 Ford Focus. They headed toward the Stanton Street Bridge crossing into Texas.

Martinez is a teacher at a bilingual charter school in El Paso. She had just been named the Teacher of the Year at her school.

By the end of the day, the 35-year-old mother of two would be under arrest, accused of attempting to smuggle more than 100 pounds of marijuana into the United States.

Because Martinez crossed daily into the U.S., she had applied for a SENTRI pass from the Department of Homeland Security. The pass costs $122 a year and pass holders must submit to a rigorous background check. In exchange, they can use the SENTRI Express Lane at the border, where travelers generally are processed much faster.

Because of her SENTRI pass and because of her regular commute, Martinez unwittingly had fallen victim to a new scheme by a local drug smuggling gang.

'This Is Not Happening To Me'

As Martinez drove onto the bridge on the morning of May 26, her daughter was strapped into a car seat in the back. Newspaper vendors wandered through the traffic, waving the latest edition of El Diario. Filthy young men with squirt bottles threatened to wash commuters' windshields. Mexican soldiers were randomly inspecting vehicles on the Mexican side of the bridge.

When I saw the two suitcases in my trunk, I thought it was like a bad dream. I thought, 'This is not real. This is not happening to me.'

One of the requirements of the SENTRI pass program is that users must keep their personal belongings visible to the customs agents. So on her morning commutes, Martinez would put her purse and her daughter's schoolbag on the front passenger seat. She says she never put anything in her trunk.

"So when I saw the two suitcases in my trunk, I thought it was like a bad dream," she says. "I thought, 'This is not real. This is not happening to me.' Of course, you know already that something bad is inside."

Inside was more than 100 pounds of marijuana.

Martinez immediately declared that she'd never seen the two bags before. She begged the soldiers to let her call her husband to come pick up their daughter, but they wouldn't let her.

"I had to keep myself calm because I wanted her to remain calm," Martinez recalls.

Martinez saw one of her co-workers driving by and she frantically waved for her to stop. Martinez tried to give her daughter to the co-worker but again the military officers wouldn't allow it. Eventually the soldiers took Martinez and her daughter together to the local prosecutor's offices.

"We stayed there a couple of hours. Finally, they let me give my daughter to my husband," she says. Martinez was sent straight to a Mexican jail.

Juarez is the murder capital of Mexico. More than 3,000 people were killed in drug-related violence there last year. Extortion is rampant. Most crimes go unpunished, and there's a general sense of lawlessness. Residents often roll their eyes or throw up their hands when asked whether they have faith in the justice system.

But something different happened after Martinez was arrested: Hundreds of people protested outside the jail, declaring that she was innocent. In Mexico, female teachers, regardless of their marital status or their age, are often called "Miss." Bumper stickers appeared saying, "Free Miss Ana!" 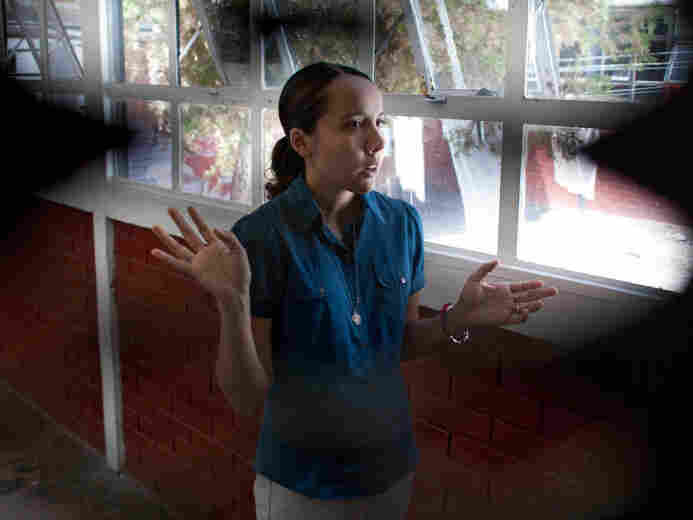 Martinez speaks in a jail in Juarez where she spent more than a month. Miss Ana, as her students call her, gave English lessons to other inmates to pass the time. Jesus Alcazar/AFP/Getty Images hide caption 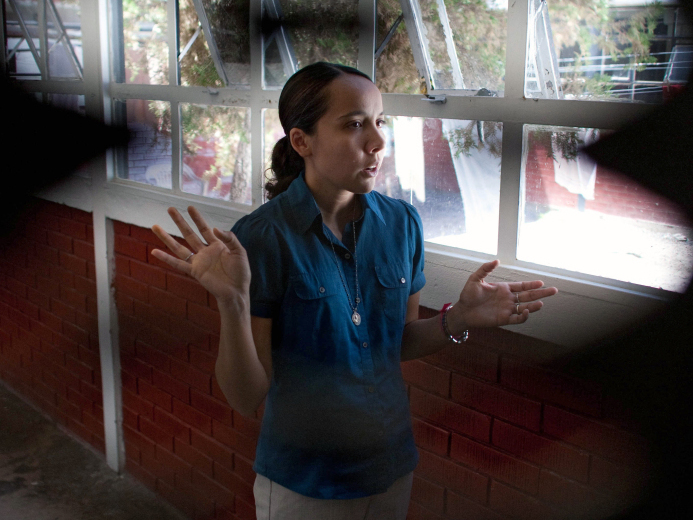 Martinez speaks in a jail in Juarez where she spent more than a month. Miss Ana, as her students call her, gave English lessons to other inmates to pass the time.

Martinez was known both at her church in Juarez and her school in El Paso as a devout Catholic and a hard-working mother. Her husband toiled in a maquiladora, one of the low-paying, free trade factories in Juarez. Her friends, her priest, her co-workers, all declared that it was impossible that "Miss Ana" was a drug smuggler.

Yet the case against her was strong. She'd been caught red-handed with 100 pounds of pot in her trunk. Mexican prosecutors ratcheted up the charges against her from possession of marijuana to intent to export narcotics.

Unknown to Martinez, on the U.S. side of the bridge, FBI agents were closing in on a marijuana-smuggling ring they say was headed by two men — Jesus Chavez and Carlos Gomez. An FBI spokesman in El Paso, Texas, declined to discuss the case because it's ongoing, but a criminal complaint filed in U.S. District Court details the investigation.

Eight days after Martinez was arrested, an FBI informant wearing a wire met with Gomez at the Shogun Steakhouse in El Paso. According to a transcript of the recording filed in federal court, Gomez acknowledged planting the marijuana in Martinez's car. And he worried about all the publicity her case was attracting. "We made such a f - - - ing mess," Gomez said.

On the FBI's recording, Gomez said he'd been tracking Martinez for almost a year and her commute was ideal: "She's like a clock, boss. Boom-boom-boom! Always."

The alleged smugglers knew her routine — where she lived, where she worked. They referred to her as "the teacher." They knew her face. Gomez even commented at one point, "She was kind of cute."

But across the border in Juarez, Martinez remained held without bail at the local jail.

"In the beginning, it was very scary," Martinez says. "When I got there, the only information I had about [the jail] was what you see on TV, movies. You see that when you get there, it's all about violence."

To pass the time, she started offering English classes to other inmates.

A few miles away across the Rio Grande, the FBI determined that Chavez and Gomez were using lookouts to monitor the SENTRI Express Lane at the border. The lookouts identified "targets" — people with regular commutes who primarily drove Ford vehicles. According to the FBI affidavit, the smugglers would follow their targets and get the vehicle identification number off the car's dashboard. Then a corrupt locksmith with access to Ford's vehicle database would make a duplicate key.

Keys in hand, the gang would put drugs in a car at night in Mexico and then pick up their shipment from the parked vehicle the next morning in Texas, authorities say.

Martinez had been in jail for more than a month, and it looked like she might remain there for years. Then FBI agents filed a criminal complaint in U.S. District Court, detailing exactly how they say Chavez and Gomez were targeting SENTRI pass holders.

All charges against Martinez were dropped. She calls it a miracle.

The FBI has documented four other cases of cross-border commuters who were found recently with black duffel bags of marijuana in their trunks. All of the duffel bags were similar. Each bag contained roughly 50 pounds of packaged pot. All the drivers said they had no idea how the marijuana got into their cars.

Officials with U.S. Customs and Border Patrol say they aren't making any changes to the SENTRI pass program as a result of this smuggling scheme. They do, however, remind users that the program is not a free pass across the border, and all vehicles coming into the U.S. remain subject to search.