Accessibility links
On Location: The Central Florida Of 'The Yearling' The film version of Marjorie Rawling's Pulitzer-Prize-winning novel was shot on location in Central Florida's "Big Scrub," the very region that inspired Rawling's book. Our series looks back at the troubles the region caused for the production, and how inseparable it is from the finished film. 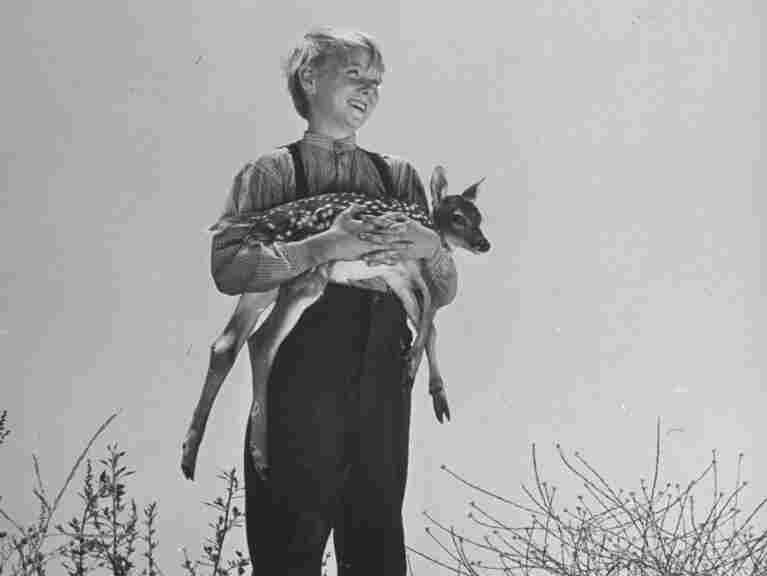 Claude Jarman, Jr., at age 11, holding a fawn on the set of The Yearling in 1946. Martha Holmes/Time & Life Pictures/Getty Image hide caption 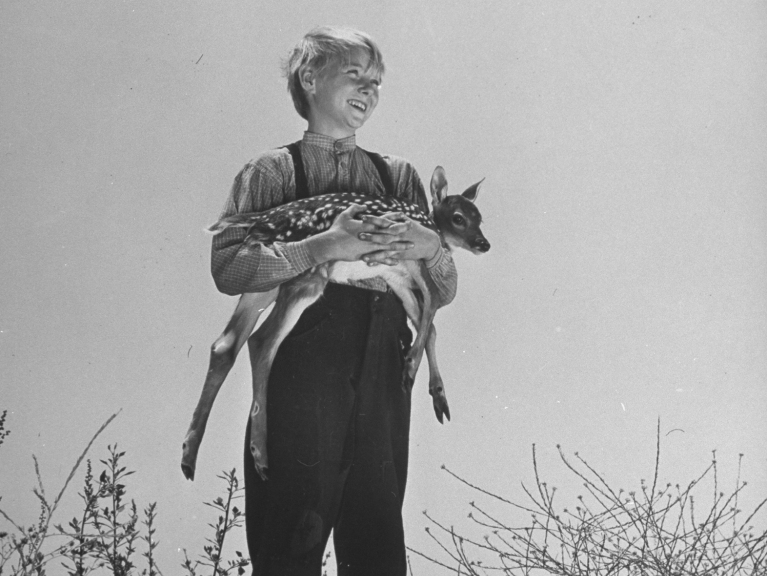 When Marjorie Kinnan Rawlings published her novel The Yearling in 1938, it was an almost instant success, winning her a legion of readers as well as the Pulitzer Prize. MGM bought the film rights to the movie, and its executives agreed with Rawlings that the movie had to be filmed on location — in a densely wooded and sparsely populated part of Florida known as the "Big Scrub."

The connection between The Yearling and the Big Scrub makes it a perfect choice for our series "On Location," where we look at the places that were important to the films that were shot there. Central Florida is inseparable from the story of The Yearling. Rawlings wrote the book there, at her cottage in Cross Creek. 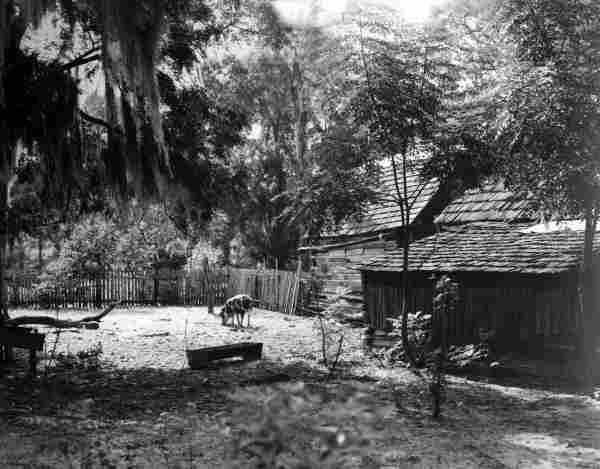 A pig in the yard of the farmhouse used in shooting the MGM film The Yearling. Courtesy of the State Library and Archives of Florida hide caption 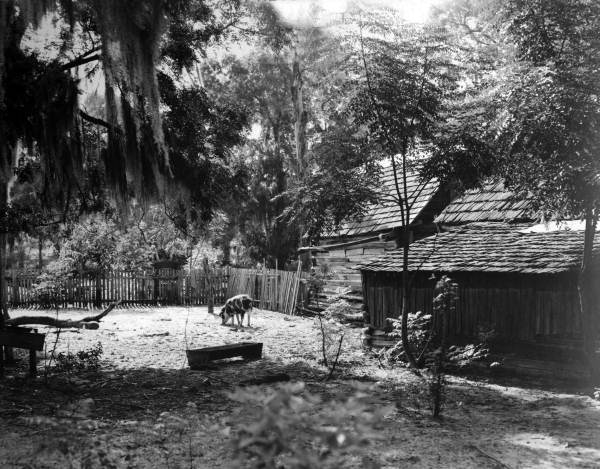 A pig in the yard of the farmhouse used in shooting the MGM film The Yearling.

Rawlings' old cottage, surrounded by orange trees, is now a state park. It looks like Rawlings just left; on the round table where park ranger Sheila Barnes says the author did most of her writing sits a Remington Rand portable typewriter, some writing paper and a pack of Lucky Strikes. After a career as a newspaper reporter, Rawlings moved here in 1928. She began writing stories drawn from the people she met who lived in Cross Creek, and in communities out in the "Big Scrub."

Gregory Peck narrates the opening scene of the 1946 film The Yearling, which surveys the "Big Scrub," the region in Central Florida where the movie was shot.

If you drive 20 miles north from Cross Creek, you find Rawlings' manuscript and notes for The Yearling in Gainesville, in the Rawlings archive in the University of Florida. Archivist Flo Turcotte says in the book, Rawlings wrote about one of the state's most unforgiving landscapes. "Even the name, 'The Scrub' — it sounds excoriating," Turcotte says. "It sounds like friction is involved. And it is quite a bit of rubbing up of humanity against an unforgiving kind of atmosphere and setting."

In the film, with Gregory Peck playing settler Penny Baxter, "The Scrub" is almost a character itself. "Here was the Scrub country," Peck intones at the film's opening. "Not many people lived here then, just a few pioneers. I found myself a wonderful wife and a little village nearby."

Listen to Cross Creek resident J.T. Glisson describe the shooting of the bear scene in 'The Yearling'

Years before the movie was made, Rawlings got to know it first-hand through visits to Calvin and Mary Long, who served as models for the Baxter family. The Longs and their children lived in the heart of the Scrub, in a clearing called Pat's Island. Rawlings renamed it "Baxter's Island," and when MGM bought the movie rights to the novel, they hired Rawlings as a consultant and location scout.

"Her idea was, 'You need to go to all these different places where I've marked,'" Turcotte says, pulling out a Forest Service map of the area on which you can see markings made by Rawlings that correspond to locations where she believed scenes in the novel should be filmed. "'You need to do your filming of Baxter's Island right where I imagined Baxter's Island to be,' which is of course a fictional place." 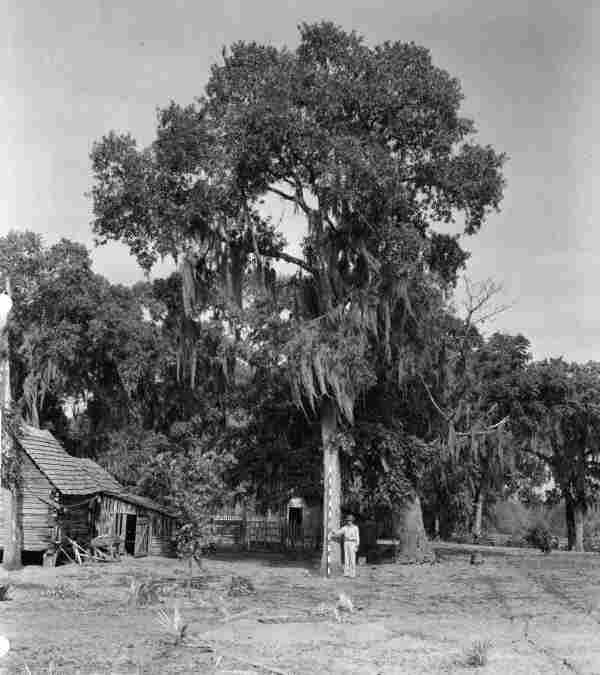 An MGM employee measures a tree at Forrester Place in Central Forida during location scouting for the filming of The Yearling. Courtesy of the State Library and Archives of Florida hide caption 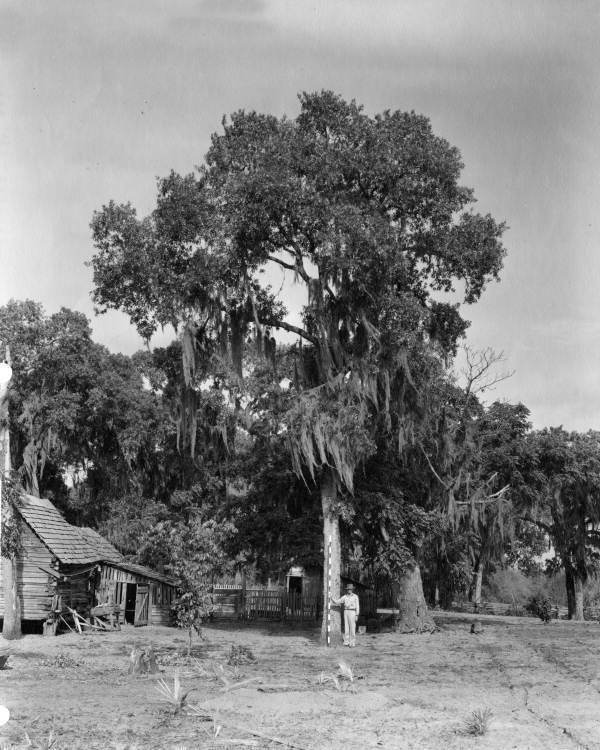 An MGM employee measures a tree at Forrester Place in Central Forida during location scouting for the filming of The Yearling.

MGM followed Rawlings direction, and soon moved into the heart of Ocala National Forest, in an area near Silver Glen Springs. The studio bought and renovated the cabin that had been home to Rawlings' friends, the Longs, then built and trucked in other buildings to complete the movie set.

Richard Mills, now 90 years old, lives nearby and remembers working on the set when he was a young man.

"They had a regular village there," Mills says. "Most all of it was real quick construction, but they had an avenue you could walk down."

MGM tilled the fields, planted corn, and hired a couple to live on the farm as caretakers. MGM hired director Victor Fleming and originally cast Anne Revere and Spencer Tracy in the lead roles of Ma and Pa. But as soon as the actors hit the location, they were confronted by the bugs and heat. Film historian Robert Snyder says Tracy also found Rawling's Pulitzer-prize-winning story corny, and eventually got so fed up that he called a cab and left.

"He took off," Snyder says. "The Hollywood people went back to Hollywood. The first shoot was scrapped even though MGM had invested, at that point, $500,000 in the film.

That was 1941. But MGM was still committed to The Yearling and hired Clarence Brown to direct. Brown, who had just finished National Velvet, resumed production in 1945. He cast Gregory Peck and Jane Wyman in the lead roles and, after a nationwide search to find an actor who could play the 12-year-old Jody, found Claude Jarman, Jr., in Nashville. Jarman, who is now in his 70s, remembers that shortly after his casting he was working seven days a week in the Florida scrub.

"Clarence Brown was a real perfectionist," Jarman says. "And it was very hard dealing with animals, particularly wild deer. Also dealing with someone like myself who didn't have much experience. And, I would say the average take for the movie was probably 20, 21 times. And today you see it done in two, three." 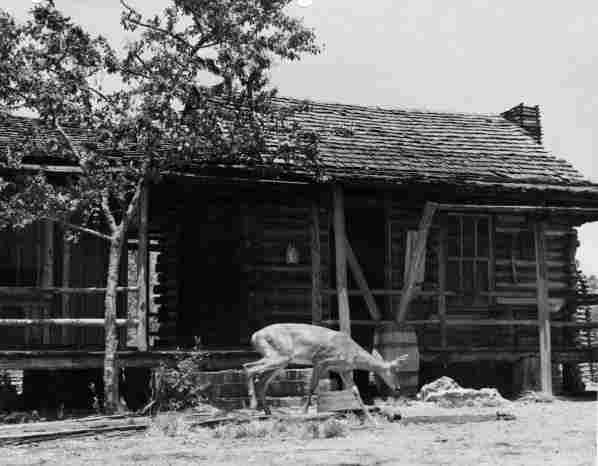 A deer near Forrester Place farm in Florida, photographed in 1940 during pre-production and location scouting for the MGM film The Yearling. Courtesy of the State Library and Archives of Florida hide caption 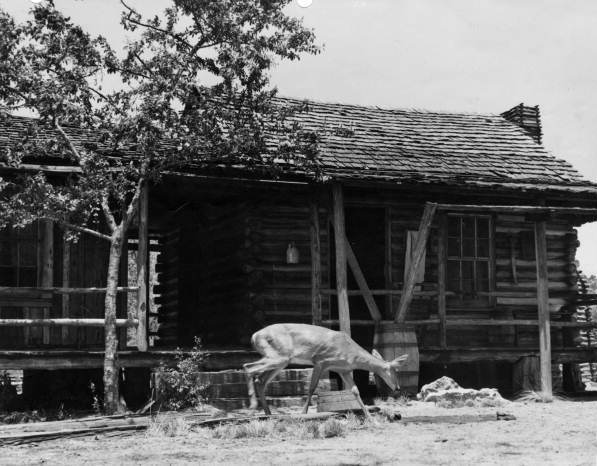 A deer near Forrester Place farm in Florida, photographed in 1940 during pre-production and location scouting for the MGM film The Yearling.

The Yearling is about a boy, Jody, and his pet deer. But the most exciting scene in the film is the bear hunt. Although she lived just 50 miles from the shoot, Marjorie Rawlings only visited the set a couple of times. J.T. Glisson, now in his 80s, grew up in Cross Creek — as a teenager he was Rawlings' next door neighbor — and still lives nearby. On the day the MGM crew was shooting the bear-hunt scene, Glisson says Rawlings convinced his parents to let him skip school so he could go along to watch.

"Miss Rawlings said, she told me on the way down there, she said, 'This is going to be a great show because these people don't know their butt from a hole in the ground,'" Glisson says. "And they bring out their dogs, and Miss Rawlings said, 'City dogs.' And they turned the dogs in. And the old bear just looked up and he knew they were damn city dogs. And one of 'em half barked at him and he got up and man, he chased them round and around the damn thing. I mean up and down."

Glisson says Rawlings bet Clarence Brown $20 that she could find dogs that would be able to catch the bear so he could film his scene. The next day, he went with Rawlings to a local hunter, where they picked up dogs, which they brought to the set in her Oldsmobile. After the crew and the actors were ready and the cameras were rolling, they turned the dogs loose.

"The old bear looked around and smelled, he knew these wasn't no city dogs, this was trouble," Glisson says. "God, they sailed into it, I mean, he hit one and knocked him as far as from here to that TV, I mean in the air. Man, they were onto him. The bear finally had enough and turned into the Silver Glen Run and swam across. Now, they had rented the damn bear. Now, the bear, they lost their bear."

Rawlings got her $20 and director Clarence Brown got a scene that's unlikely ever again to be equaled.

Today, the location in the heart of the Ocala National Forest where The Yearling was shot, and where Rawlings was first inspired to write her novel, shows only the barest remnants of the set, a mound of dirt, some pieces of brick. The Hollywood set is long gone, along with all the buildings and fences put up by the settlers who used to live here. But for anyone who's seen The Yearling, there's something instantly recognizable: the "Big Scrub."