Accessibility links
La. State Rep. Noble Ellington, National Chairman Of ALEC, Responds To Report Louisiana state Rep. Noble Ellington is the national chairman of ALEC, a membership-only group that brings together state legislators, interest groups and corporate representatives to draft model bills. He responds to a series of pieces about the organization recently published in The Nation. 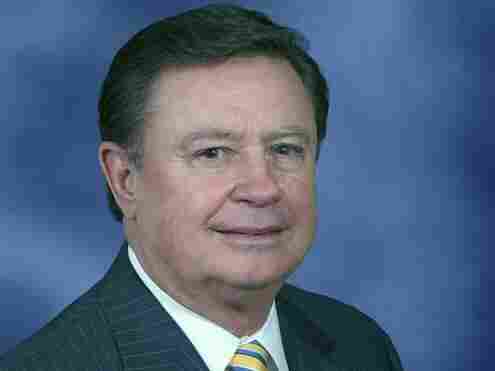 Louisiana Rep. Noble E. Ellington has been a member of the state House since 1995. He serves on several committees, including Appropriations and the Joint Legislative Committee on the Budget. Louisiana House of Representatives hide caption

The Nation recently published a series of pieces about the relationship that state-based legislators have with a group called the American Legislative Exchange Council (ALEC). ALEC is a group that brings together state legislators, interest groups and corporate representatives to draft model bills that can then be introduced at the state level of government.

On today's Fresh Air, Louisiana State Rep. Noble Ellington, a Republican from the 20th district and the national chairman of ALEC, responds to The Nation's report.

"While we may be discussing it, it may not be transparent, but before it's passed, legislators have to say, 'We approve this model legislation. Not the corporations. They don't have a vote. Legislators say [what is introduced]. ... And then the legislators can introduce that legislation in [their] state. It goes through a committee, the public has input, they have an opportunity to talk to their legislators about the legislation — so I don't see how you can get more transparent than that."

On working with corporations

"It's to work with businesses to promote business growth and private-sector growth so that we can stimulate the economy. And [bills] may start out in the corporation and the ALEC members, but then only legislative members approve model legislation — not the private sector advisory board. They don't approve the legislation. ... Only the public sector members have the final say."