Accessibility links
A Year Later, Financial Reform Questions Remain A year ago Thursday, President Obama signed the Dodd-Frank bill into law, creating a consumer protection agency and addressing fallout from the financial crisis. But some experts say it's unclear whether the law really means some firms are too big to fail. 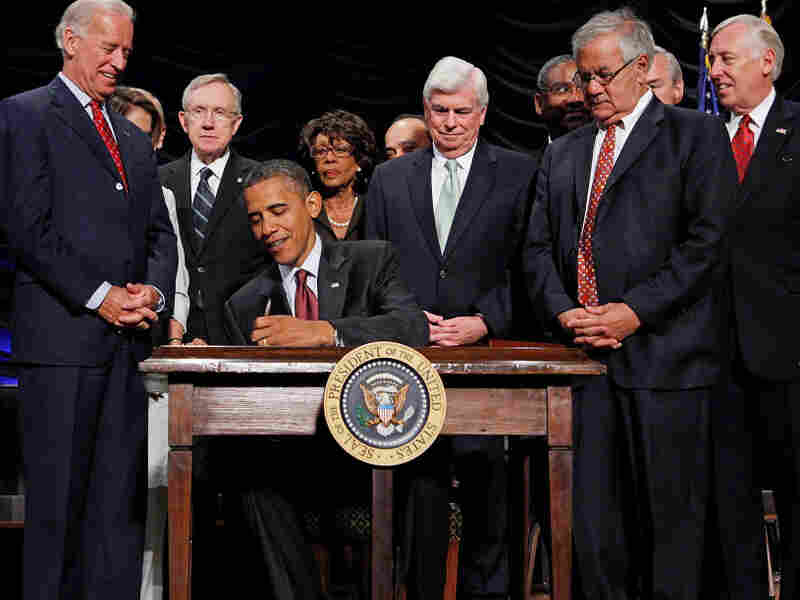 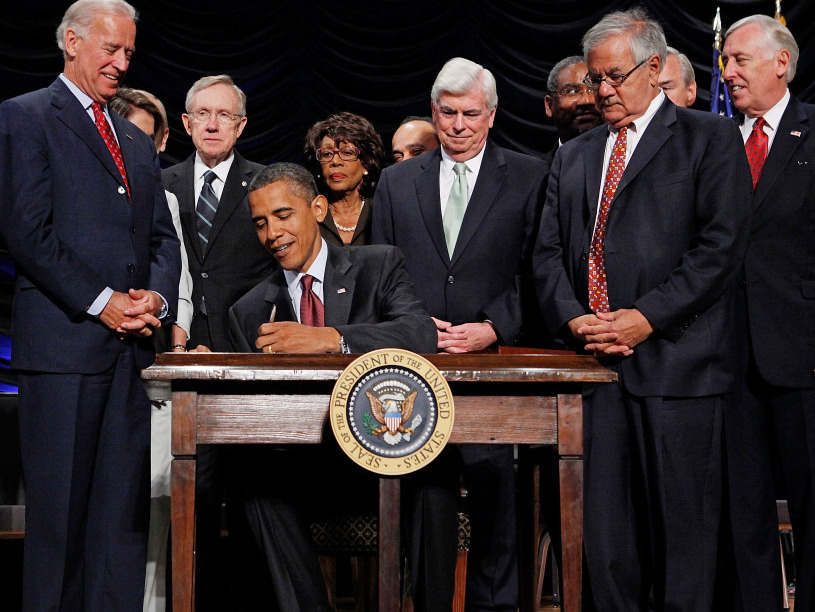 "The American people will never again be asked to foot the bill for Wall Street's mistakes. There will be no more tax-funded bailouts — period," Obama said.

The so-called Dodd-Frank Act will mean no firms are too big to fail, the president said.

But financial firms have consolidated since the crisis, and some experts are still debating whether the law really eliminates the possibility of a future government-funded bailout.

So the question remains, is "too big to fail" really dead?

The administration's categorical answer is "yes." Officials say that under the new law, the government can oversee the dismantling of a failing firm. But it has no legal authority to do bailouts.

But some experts believe the truth is actually a little murkier.

"To the question of whether 'too big to fail' is gone or not, the jury's still out," says Sarah Rosen Wartell, the executive vice president of the Center for American Progress and a former Clinton administration official. She says it's unclear because regulatory agencies are still hammering out details of how to implement the law.

Wartell cites the so-called "living wills" provision as an example.

Regulators will require some large financial firms to file living wills, or details about how their businesses operate. The theory is that, in the event of another crisis, this would help the government wind down a failing business without disrupting the financial system.

"And the real question is whether the regulators will have enough strength to look at some of those plans, and where they see that there's too much systemic risk there — that it's too hard to unwind some of these institutions — will they force restructurings and divestitures of some of these institutions?" she says. "[It's] not clear yet. That's one of these places where there's a great deal of discretion left to the regulators."

Will The New System Work?

Wartell says whether the living will works, and whether "too big to fail" ends, depends largely on how muscular regulators are. She says opponents are trying to weaken the rules by delaying implementation or by threatening to cut funding.

"But I think we are better off than we were before the legislation — absolutely no doubt — and we have the promise of a more effective system," she says.

However, Peter Wallison disagrees. A senior fellow at the American Enterprise Institute who was a member of the Financial Crisis Inquiry Commission that looked into the causes of the crisis, Wallison has, from the beginning, criticized the financial reform law.

"We have, in the Dodd-Frank Act, institutionalized 'too big to fail,'" he says.

Wallison says by identifying large firms that need to file living wills, regulators are essentially saying, "These are the companies that are too big to fail." He says investors will once again take that as a kind of implicit government guarantee.

"And those companies will have major advantages over their smaller competitors," he says. "This is a serious, serious, problem in my view."

Wallison says the large firms may benefit from their unofficial status as being too big to fail, but they will also have to comply with greater regulatory oversight. And he says the effect will be that U.S. financial firms lose ground to foreign competitors.

Wallison isn't saying this will lead to another taxpayer-financed bailout, but he doesn't see how it will prevent one, either.

The Dodd-Frank Act's intent is to give regulators a broader array of tools to monitor the financial system. When the next big shock comes, the government wants to be able to minimize the fallout.

The problem is, it might take another crisis to see if the new system works.