Accessibility links
2010 Isn't What Many Futurists Of The Past Imagined Back in 1983, futurists predicted we would have orbiting drug labs and a cure for cancer by now. The year 2010 was seen as the distant, rosy future. Now it is 2010 and we wondered: How did the predictions of futurists turn out?

2010 Isn't What Many Futurists Of The Past Imagined

2010 Isn't What Many Futurists Of The Past Imagined 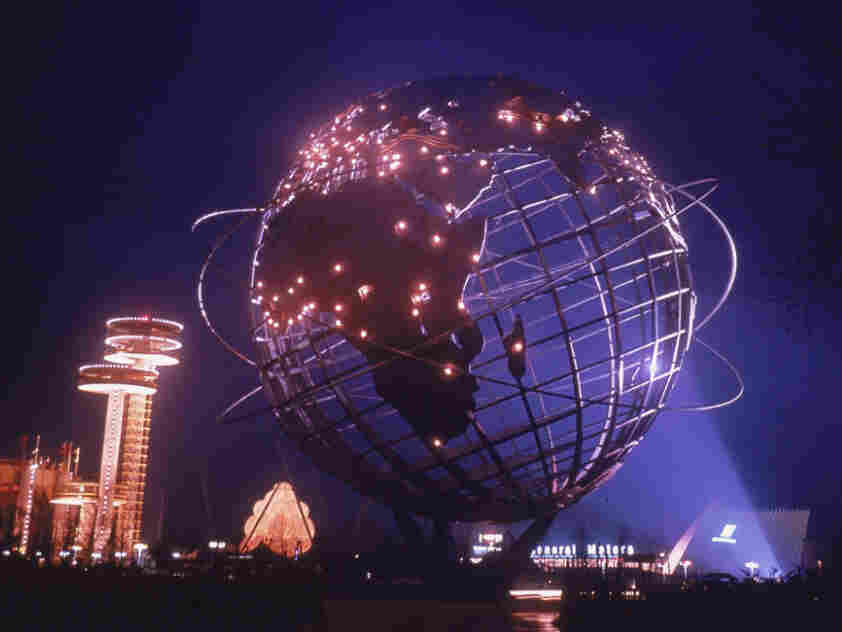 The late visionary Arthur C. Clarke was a master of predictive fiction. In Clarke's 1968 film, 2001: A Space Odyssey — which he co-wrote with director Stanley Kubrick — we get a taste of the vast influence that computers will have in our lives over the coming decades.

The 1984 movie sequel to 2001: A Space Odyssey, was about — among other things — humans making contact with alien life. The year he chose for this breakthrough: 2010. 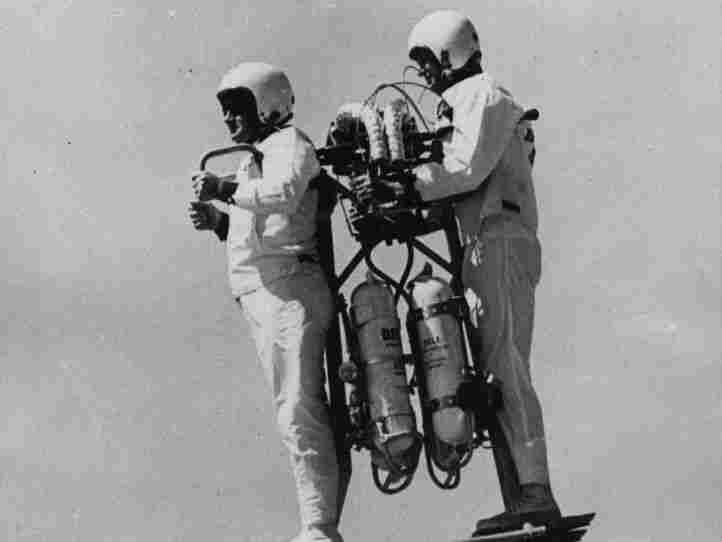 Jet packs were supposed to be in our future. Keystone/Hulton Archive hide caption

Glancing back, there are other predictions for 2010. Some have proved true. Others seem as ludicrous now as they did back when.

In 1983, the Science & Technology Agency in Tokyo polled 2,000 experts — university professors, government officials and business thinkers — in more than a dozen fields about 800 technological categories. The Japan Economic Journal reported on the results and what life in 2010 would be like "if all the new technologies and innovations actually materialize as planned."

Japanese seers got some things right. Ordinary households, according to the report, "would enjoy all kinds of information thanks to the development of digital communications networks."

They missed on a few things, too. "The three most pernicious adult diseases — cancer, cerebral apoplexy and heart ailments — would be conquered." We wish.

And the futurologists imagined the skies in 2010 alive with orbiting factories and experimental laboratories "floating around in space, producing new pharmaceuticals, alloys and other substances, taking full advantage of the absence of gravity." They also believed that satellites would generate power from solar rays to be used by earthlings.

What do you think the world will look like a decade from now?

Will we send avatars to the office so we can play mini-quidditch with friends? Will we be wearing iBands on our wrists that serve as phone, computer, gaming console, personal jukebox and more? Will we be eating deep-fried wine and drinking bacon-on-the-rocks?

Maybe in the future, everyone will be a futurist. What are your predictions about life in 2020? Feel free to predict in the comments section.

That was before the Challenger exploded in 1986, knocking space exploration — and exploitation — on its heels. Predictions are sometimes gang-tackled by actual events.

One key to divining trends or developments is to pay attention to "material that credibly contradicts what we think we know," says Erica Orange, a blogger for the World Future Society and vice president of the futurist consulting group Weiner, Edrich, Brown.

A major difficulty in contemplating the future "is not so much what people don't know as it is what they think they do know," Orange says. "In order to learn new things and become truly objective about the future, you first have to begin forgetting — by discarding no longer useful information. Change gives information, knowledge, expertise a short shelf life."

A major task for a futurist, then, Orange adds, "is to help people and organizations clear their memory banks of the now useless information that impedes their ability to acquire new and more useful information."

At the 1985 FutureWorld Expo in San Francisco, futurists and inventors were encouraged to set aside preconceptions and reach for the stars. Or the starfish. Organizer Todd Mills told United Press International that by 2010, energy produced by "laser fusion" would make underwater cities possible and that in surface cities solar-powered cars would dominate the streets.

In 1989 the British company Applied Futures made a list of prognostications for 2010. Again, the prophets hit some nails on their heads: Many of consumers' material needs would have been satisfied by 2010, the report stated, "so the emphasis of the markets will have moved from supply-push to demand-pull: the customer really will be king and he will expect his every little whim to be catered for."

Other times the prophets' hammers hit their thumbs: "The vogue for home extension will be superseded by the development of pedestrian streets, covered in translucent materials to create local controlled environments," according to the 1989 report. "Leisure activity will spill on to these streets. Households will join together to install expensive leisure equipment that they could not afford individually ... and communications centers capable of displaying 3-D images."

The World Future Society predicted in 1992 that Quebec would separate from Canada in 1996 and the remaining provinces would become part of the United States by 2010. Quebec never pulled away from the mother country, despite a very close referendum in 1995. So much for adding stars to the American flag.

And remember "virtual reality"? In 1997, trendy futurist Faith Popcorn predicted it would overtake TV in American homes by 2010. (Maybe Reality TV or social media like Facebook and Twitter are the hybrids.) She did tell Industry Week — and rightly so — that for many people in 2010 a computer would "act as an extra brain" in everyday life.

What Predictions Also Tell Us

"We want to make Google the third half of your brain," Google co-founder Sergey Brin said in September.

So many wild predictions from the past about 2010 have come true so fast, it does seem like we already live in the future. Robots clean the floors and serve drinks and bark like pet dogs. Google's self-driving cars are cruising the streets. A reporter from The New York Times has risen from the ground with a jet pack on his back. 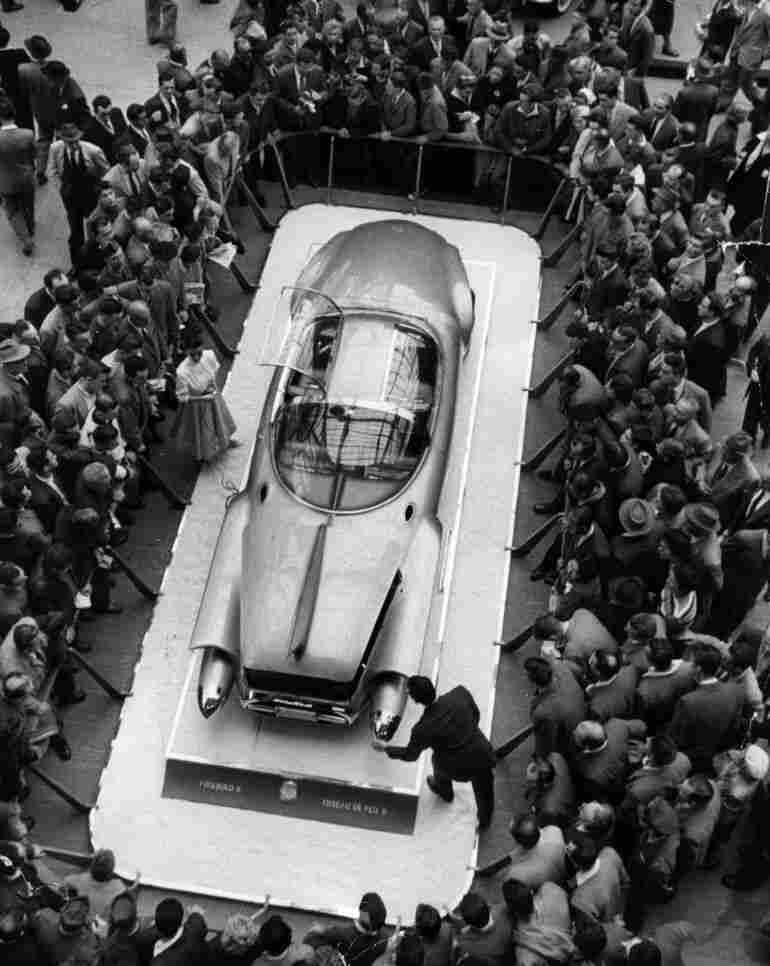 Car, or rocket? The Firebird II, a General Motors concept car, looked like both at the Paris Motor Show in 1956. Thurston Hopkins/Hulton Archive hide caption

But what about all the predictions that didn't come true? What can we learn from them?

Maybe by looking back at the predictions — realized and unrealized — we can glean something about life in the past. What the predictors longed for. What they wanted. What they feared.

Those 2,000 Japanese futurists in 1983, for instance, predicted that by 2010 it would be possible to successfully predict earthquakes. The country was still grappling with the tragic results of the Miyagi earthquake of 1978 that caused massive mudslides and more than two dozen deaths.

The Japan Economic Journal also reported that the futurists believed "prevention of cold damage in agricultural areas would come to light by the year 2010." The winter of 1981 was particularly harsh in Japan. Some 48 people died during the heaviest snowfall in nearly 20 years, The Globe and Mail of Canada reported.

Robin Hanson, an associate professor of economics at George Mason University and a research associate at the Future of Humanity Institute of Oxford University, says that we all make predictions about what will happen in the tomorrows to come. "Most statements in ordinary conversation that contain implicit predictions about the distant future are mainly concerned with current issues," he says. "This also applies to most fiction and nonfiction about the distant future."

In reality, Hanson says, "people aren't much concerned with the distant future except as it says something about them today."

And so we look to tomorrow to solve our problems of today. Futurists of the future — that's your cue.