Accessibility links
Enterprising Young Musicians On The Road To Interlochen Interlochen is one of the most prestigious summer music and arts camps in the country. It's also one of the most expensive. With the economy in the doldrums, how are families affording it? Some enterprising young campers have been extra-resourceful in coming up with the cash. 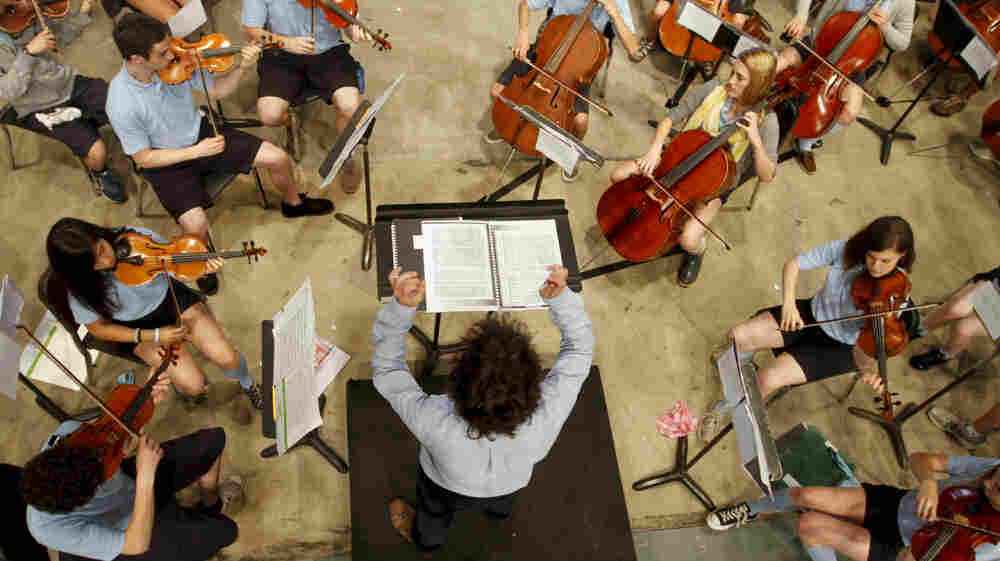 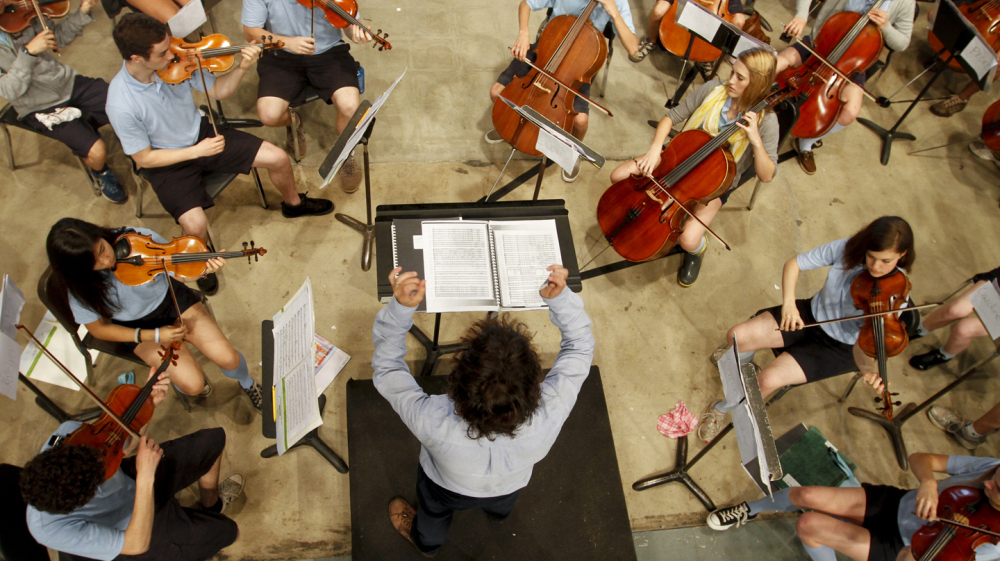 Cellist Sara Page (center, right) rehearses with the World Youth Symphony Orchestra at Interlochen Arts Camp. Page is among the campers who made an exceptional effort to raise funds to attend the camp this year.

For young people who want a career in the arts, a handful of prestigious summer camps are a vital early step. Interlochen, in northern Michigan, is one of them.

Jessye Norman, Josh Groban, Norah Jones and Lorin Maazel all spent summers at Interlochen when they were younger. But with tuition ranging from $3,000 to $10,000, depending on the campers' age and discipline, does it mean that only rich kids get to follow in their footsteps? It turns out that some extra-resourceful young people are paving their own way. I went to camp to meet them.

Interlochen has been around since 1928. It was first called the National High School Orchestra Camp. Its founder — the late Joe Maddy — was known to be a visionary who was often short on cash. His goal was total immersion in the arts. Over time, the determined Maddy got his wish; just walk around Interlochen and the evidence is immediate. Everywhere you turn, young people are practicing, in the hallways or one of the dozens of small cabins scattered throughout the woods. Every camper takes classes, receives either small group or private instruction, and has the chance to perform in one of the camp's many different performance venues.

Interlochen is also seriously old-school. In some ways it's hard to believe so many teenagers would want to spend the summer here. They have to wear uniforms: light blue t-shirts and, for the young women, knickers when they perform. They have to hand over their cell phones, and only get them back twice a week for 30 minutes. At about 6:30 a.m. every weekday, there's morning line-up, complete with reveille and morning announcements.

"That's the worst part of the day," says 17-year-old Cassi Mikat from Brighton, Mich. "After that, I'm fine."

Mikat is studying musical theater. Two summers ago, she did an intensive one-week program at Interlochen. "I didn't really realize until I got here how amazing it is, how great the instructors are and how much I would learn while I was here," says Mikat.

In order to come back for a six-week program this year, Mikat made a deal with her parents: She would pay a certain amount of the $7,000 tuition herself. "I have four younger siblings, and it's just not possible to pay for camp with that many people in my family," Mikat says.

She raised some of the money taking the DIY retail route. Since people had always complemented the colorful, flower hairpins she made for herself out of soda cans, she set up a Facebook page and started selling them for $5 apiece. Mikat says the venture made her about $700. "I made a lot of them," she says. "What I really needed was a staff to keep up with all of the orders."

For the rest of her share of the tuition, Mikat baby-sat — and, for two Christmases in a row, asked for cash in lieu of presents. She also received a scholarship from Interlochen. Right now she's working with a cast of 40 other campers on the musical Carousel, in which she got the lead.

"Now that I'm finally here," she says, "I want to get as much out of it as I possibly can."

Interlochen campers have a reputation for being pretty intense, but the camp does have some traditional summer activities and encourages fun.

"It's sad," jokes DeRon McDaniel, a 17-year-old from Cleveland. "They actually force us to do things." That includes arts and crafts and swimming in the lake. McDaniel, a bass-baritone, says he'd rather sing.

Like Mikat, McDaniel says that once he got into Interlochen, facing the cost was sobering. His family was going through an extra-hard time: with his mother experiencing financial difficulties, they lost their house to foreclosure and McDaniel was forced to move in with his grandmother.

"I was very comfortable for a long time. And then this came out of nowhere, which threw us all off guard," McDaniel explains.

Interlochen saw his potential and gave him a scholarship for $5,000, but he still had to come up with the balance. He wrote letters to potential sponsors, gave a pay-what-you-wish recital, and got in touch with the music directors at two churches where he sings. Donations large and small poured in.

"I said every little bit counts, because it really does," says McDaniel. "I didn't care if someone gave me a dime, a penny, a nickel, whatever. It all added up eventually."

Over the decades, young people have traveled to Interlochen by plane, bus, train or even hitchhiked. Interlochen conductor and director of orchestra programs Jung-Ho Pak says the campers who have had to come up with part or all of the tuition themselves are showing an entrepreneurial spirit that will serve them well.

"It really is a testament to how much they want to be an artist, because it doesn't get any easier when you graduate Interlochen or go to conservatory and graduate and try to get a job," says Pak. "It's about sacrifice. But it's also about love and the things we do for the things we're passionate about."