Accessibility links
These Hospital Blankets Touch Millions Of American Babies Medline makes the white flannel blanket with pink and blue stripes used in hospital delivery rooms across the country. The company has produced close to 25 million of the blankets since 1980 alone. 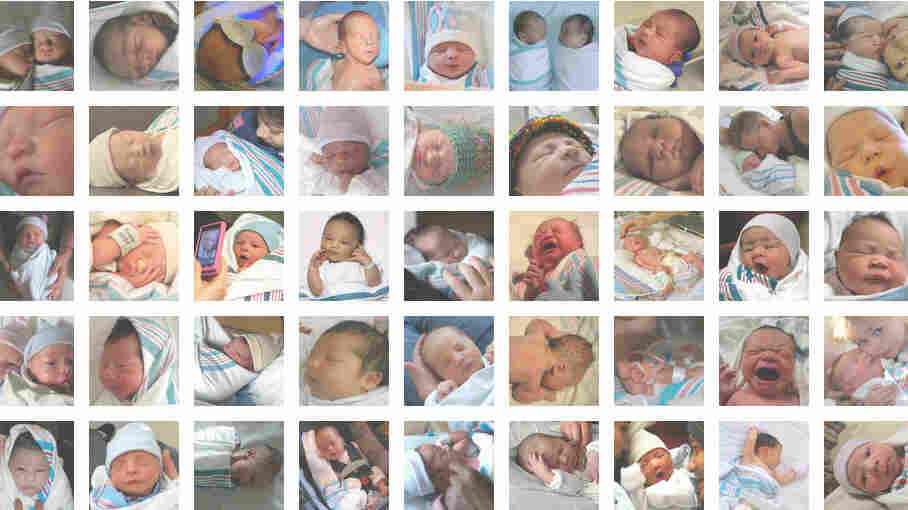 Last week, NPR asked for photos of newborns with the pink-and-blue-striped flannel blanket. We received close to 2,000 photos, from almost every state in the U.S. NPR hide caption

Part of an ongoing series on pregnancy and childbirth.

It may be an unassuming piece of fabric, but it has woven itself prominently into American life.

If you've seen a photo of a newborn baby recently, you've probably laid eyes on it. 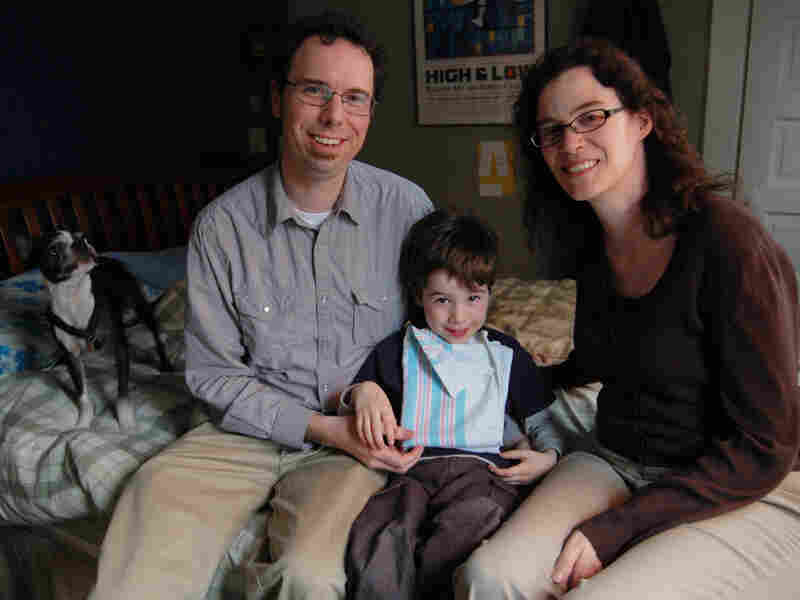 Zac and Penny Johnson's son Henry is 4, but they still have his hospital blanket in a box with other keepsakes. Zac remembers bringing one of these blankets home to their dog Daisy to smell, in anticipation of Henry's homecoming. Andrea Hsu/NPR hide caption 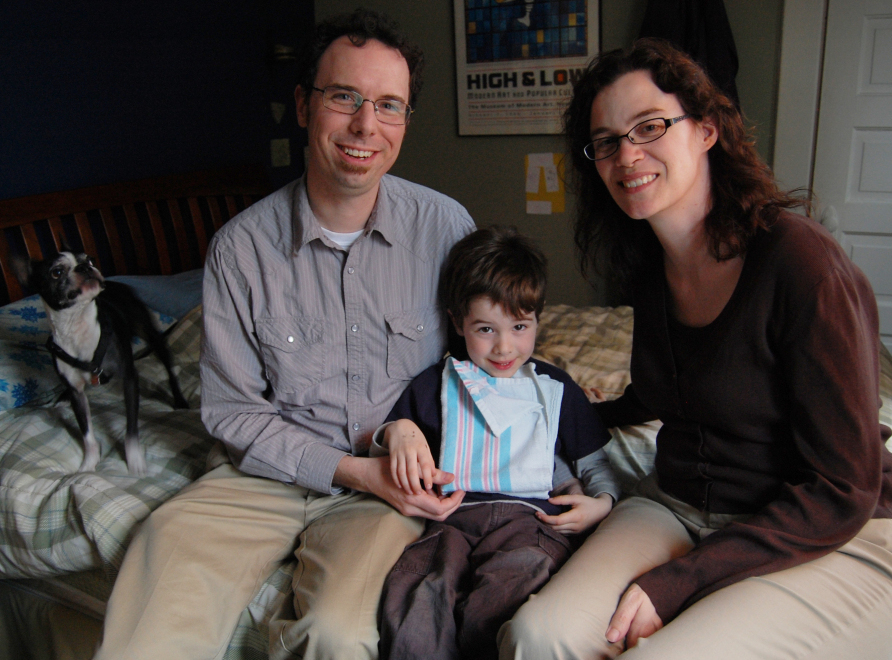 Zac and Penny Johnson's son Henry is 4, but they still have his hospital blanket in a box with other keepsakes. Zac remembers bringing one of these blankets home to their dog Daisy to smell, in anticipation of Henry's homecoming.

We're talking about a white flannel blanket with pink and blue stripes that is used in hospital delivery rooms across the country. It's one of the first things to touch the skin of countless babies every year.

Nurse Donna Clark, manager of the maternity ward at Advocate Condell Medical Center in Libertyville, Ill., says her hospital has stocked the same blankets since she started working there some two decades ago.

"They're very absorbent when you first get them. They wash well," she says. "They're the right size for the baby. They're gender neutral, so we don't get a dad saying, 'You're putting my boy in pink or my girl in blue!' "

The blankets are made by the medical supply company Medline, based in Mundelein, Ill. They're part of the company's "Kuddle-Up" line.

Jim Robertson, president of Medline's Medcrest textile division, guesses that the company has produced close to 25 million of the blankets since 1980 alone.

"We sell approximately a million and a half units a year of just this one style, which is absolutely our No. 1 style of blanket," he says, adding that the blanket has been a staple item for the company as far back as they can trace the catalogs — to the 1950s.

While the blankets were once made in the U.S., production moved overseas, and today they're made in Karachi, Pakistan.

Robertson says part of the appeal of the pink-and-blue-striped blanket is the price. Wholesale, they sell for about $2.50 apiece, which is less than the same blanket with a duck or a dinosaur print.

Many of the blankets used in hospital delivery rooms and nurseries are faded: That's because they get laundered multiple times. Some hospitals launder their own linens. Others rent their linens from hospital laundries, such as Healthcare Laundry Systems in Wheeling, Ill.

Zsejke Tusa, Healthcare Laundry Systems' director of sales, service and marketing, says last year they purchased 180,000 of the pink-and-blue-striped baby blankets. Each blanket lasts about 15 washes before it's thrown out or lost.

While many hospitals don't make a policy of giving receiving blankets to families, many of the blankets end up leaving the hospitals with the babies.

At Advocate Condell Medical Center, Jaime and Robert Wittenberg have just welcomed baby Alexander into the world. They admit they took home 12 blankets after the birth of their first child.

"We promise we won't take anymore!" they say, though Jaime notes that they used them for a long time after the birth of their first son.

Zac and Penny Johnson of Ann Arbor, Mich., have a box of keepsakes from their son Henry's birth. Henry is already 4 years old, but they still have one of his hospital blankets in the box.

Just days after Henry was born, Zac Johnson wrote on his blog that he was totally in love — with the blanket.

"I don't know, the pattern reminded me of sort of like Italian racing stripes," Johnson says, "almost like would be on the side of a motorcycle helmet, or a cool old Steve McQueen race car."

An NPR call-out for photos of the classic blanket brought in close to 2,000 submissions from almost every state in the U.S. It turns out, not everyone loves the blanket. 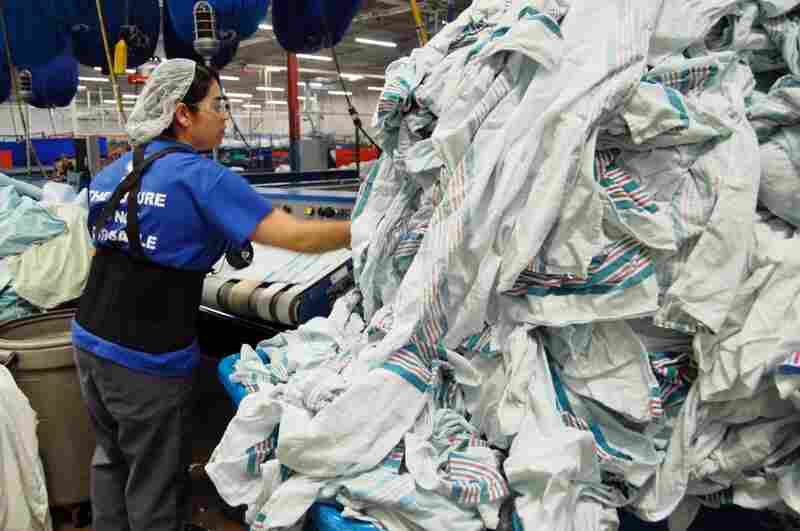 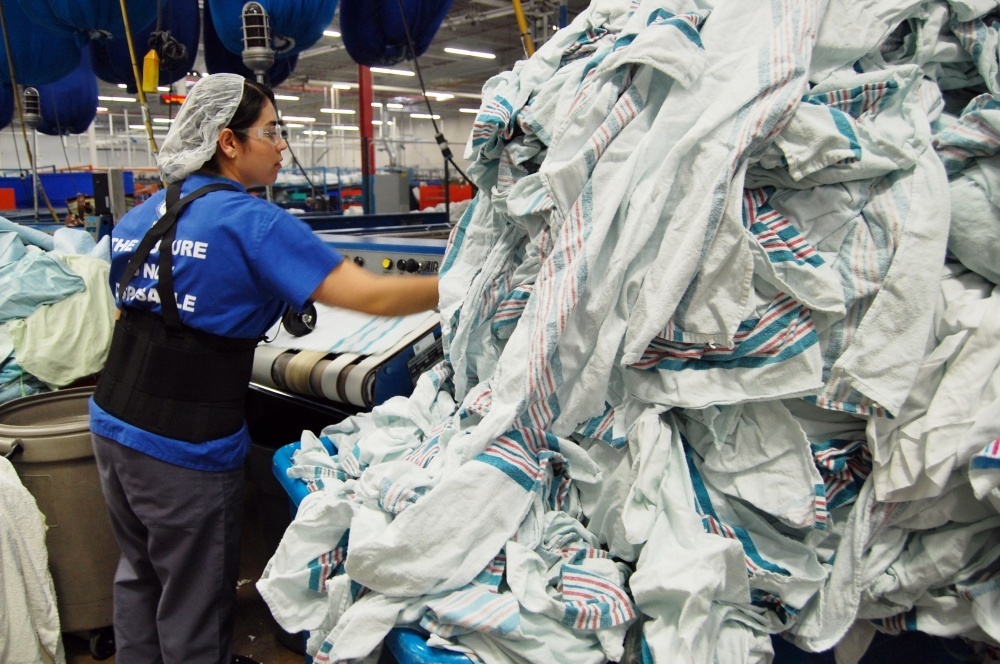 Maria Murillo processes clean baby blankets at Healthcare Laundry Systems in Wheeling, Ill. Last year, the laundry purchased 180,000 blankets to supply to hospitals around Chicago. Each blanket lasts approximately 15 washes before it's thrown out or lost.

Dana Slowik of Philadelphia found it "too generic, rough and not that cute!"

And Julie Marsh of Los Angeles told NPR that she grew to hate the blankets, after spending the first week of her baby's life on the pediatrics ward following a rough delivery. Today, she says the blanket "stirs mixed emotions — overwhelming joy, anxiety, frustration, a sense of incarceration, but mostly I recall the precious bond with a tiny, fragile, lucid human who became the center of my world."

While the blanket has been a runaway success for Medline, it's not a product the company showcases much.

Medline's President Andy Mills says after all, it is a minor character in the momentous production that is childbirth.

"It's such a beautiful event," Mills says. "It's great to be part of it, but we're not the leading role in there."