Accessibility links
Obama's Many Acts Command Debt-Ceiling Stage Each "Groundhog Day" of negotiations has brought a slightly different performance from the president: monologue one day, chorus number the next, and maybe a fight scene when things get spicy. 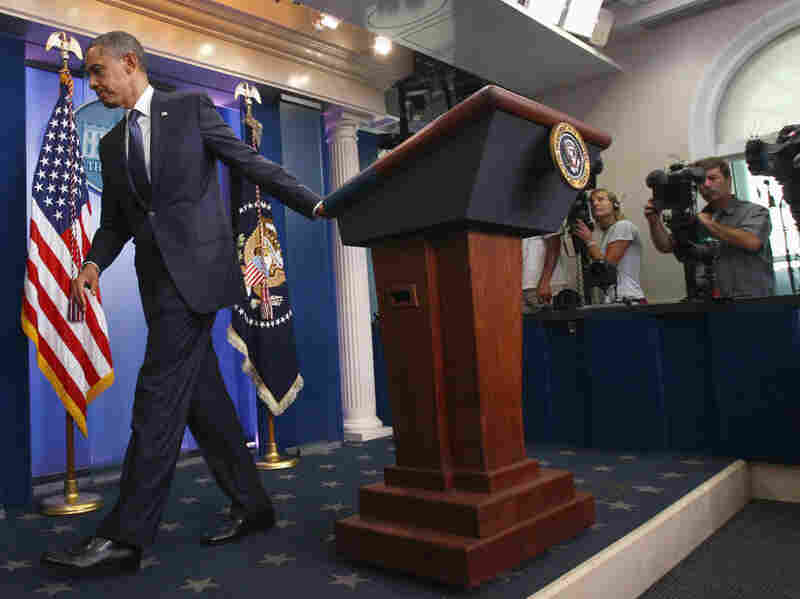 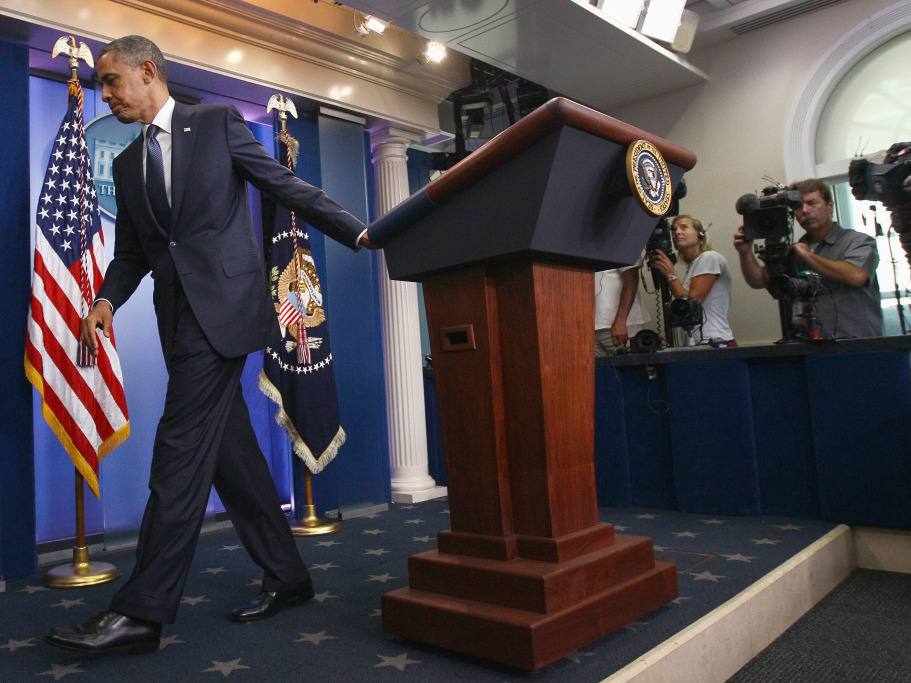 President Obama walks away from the Brady Press Briefing Room earlier this week, after a brief statement on ongoing debt ceiling negotiations with congressional leaders.

When President Obama's motorcade leaves the White House on Friday, it will be his first public event outside of Washington in three weeks. And even then, he's only going to the D.C. suburb of College Park, Md.

The town hall meeting is likely to focus on the same theme that has captured almost all of the president's attention this month — the debt ceiling. It's just one more tool the White House is trying to use to get a deal.

All The World's A Stage

In acting class, teachers use a game called Three Actions, One Objective. Here's how it works: The teacher gives an actor a goal. The objective could be something like get a kiss — or, raise the debt ceiling.

Then the actor on stage uses three different actions to pursue the objective. One action might be to scold, as the president did when he said it's time to "pull off the Band-Aid" and "eat our peas."

Another action might be to threaten. (Obama: "I cannot guarantee that those checks go out on Aug. 3 if we haven't resolved this issue.")

The third action could be to praise. (Obama: "I want to congratulate the Gang of Six for coming up with a plan that I think is balanced.")

In some ways, the past few weeks have been the same scene playing out again and again. Or, as White House spokesman Jay Carney put it: "It really is Groundhog Day."

But look more closely, and each day has brought a slightly different performance from the president: monologue one day, chorus number the next, and maybe a fight scene when things get spicy.

Some of the action takes place off-stage, like the weekend the president met with congressional leaders behind closed doors. But that same weekend, he was also in front of the camera, talking about the debt ceiling during his weekly YouTube address.

"Simply put," he said then, "it will take a balanced approach, shared sacrifice, and a willingness to make unpopular choices on all our parts."

While that was just a monologue, the president has also taken questions during three news conferences over two weeks. On Tuesday, he did interviews with local TV stations. And on Friday, he'll be heard on the NPR program Tell Me More.

Jack Howard, who has worked for Republicans in Congress and the White House, thinks these daily matinees are counterproductive. "A lot of what we've seen from the podium recently is not helpful in terms of trying to bring members along to some kind of a potential deal on a debt ceiling," he says. "My own experience is that it's better to quite candidly stay out of the White House press room, and stay off the Sunday talk shows and lower the rhetoric."

The president has to balance the way he speaks to many different audiences. To some Republicans, Obama's support for a given plan can be the kiss of death. But even if he can never win over some lawmakers, he can tip the debate in his favor by winning over the public.

Jeff Shesol of the group West Wing Writers worked in the Clinton White House. "The real reason to step to the podium," he says, "is because the president has this unique ability to drive the public discussion and to set the terms for the public debate when he's doing his job effectively. And I think President Obama's been doing that very effectively over the last few weeks."

The reviews have started coming in from pollsters, and they seem to confirm Shesol's opinion.

"Obama's numbers look pretty good, and reactions to him relative to the Republican congressional leadership is pretty positive from his point of view," says Andy Kohut, president of the Pew Research Center.

This is an important debate ... and the consequences of the decision, I think, will be felt for some time in the court of public opinion.

A Pew-Washington Post poll showed Americans split roughly down the middle on whether they have confidence in Obama to handle the debt ceiling. That may not sound great, but it's far better than any of the congressional leaders did in the survey.

And when it comes to policy, the White House plan is far more popular than the Republican alternative. An NBC-Wall Street Journal poll found that 58 percent of Americans prefer cutting the deficit through a combination of tax revenues and spending cuts; only 36 percent prefer cuts alone.

Kohut says these opinions could last far into the future. "This is an important debate," he says. "It's now being defined as a very important issue by more than 90 percent of the people that we've questioned, and the consequences of the decision, I think, will be felt for some time in the court of public opinion."

In other words, it's not just the economy that hangs in the balance. When the curtain falls on this drama, politicians' jobs will be on the line, too.