Accessibility links
Fleeing Famine, Somalis Push Into Kenya In the Horn of Africa, about 11 million people lack sufficient food amid the worst drought in 60 years. The U.N. has declared a famine in southern parts of war-ravaged Somalia, where thousands of refugees are moving into Kenya seeking food, medicine and shelter at already crowded camps.

The crippling drought in the Horn of Africa has affected about 11 million people in a region straddling Somalia, Ethiopia and Kenya. But it's Somalia that has been hit hardest. This week, the United Nations declared a famine in two parts of the lawless nation – Lower Shabelle and Bakool in the south.

Thousands of Somalis are crossing the border into semi-arid northeastern Kenya, in search of shelter, food and medical care. They are streaming into the giant Dadaab refugee complex, which is the world's biggest collection of camps.

For the new arrivals, life is grim. They start off at what are called spontaneous settlements, which have sprung up all over the outskirts of the camps. The one in Dagahaley stretches endlessly in inhospitable, sandy ground, with a howling wind whipping up the dust.

The U.N. says 80 percent of the new arrivals are women and children. The Somalis are crossing into Kenya at a rate of about 1,000 a day. Many spend their first few days living out in the open, with precious little shelter except for scattered thorn trees.

The Somali refugees who have had a little time to establish themselves at the camp construct makeshift homes out of tree branches, covered in plastic sheeting printed with the names and symbols of humanitarian agencies. Men and women drag the branches or hoist them onto donkey-drawn carts. Then they begin manually tying strips of cloth and weaving them in between the branches to stabilize the precarious structures they call home.

Despite the difficult beginnings, the new refugees say life is better here than facing famine, drought and conflict in Somalia, because there is peace in Kenya.

For the past 20 years, when refugees first began crossing into Kenya to escape the conflict and clan fighting back home, Somalia has been without a functioning central government.

Many call it a failed state. The transitional national government controls only small parts of Somalia, including a section of the capital, Mogadishu, with the help of peacekeeping forces from the African Union.

Other parts of the country are in the hands of the powerful anti-Western militant al-Shabab group, which has ties to al-Qaida and is on the United States' terrorism watch list.

Al-Shabab threw out international relief agencies and allowed them back into the country only this month. But aid organizations, and the U.S., are concerned about safe access. 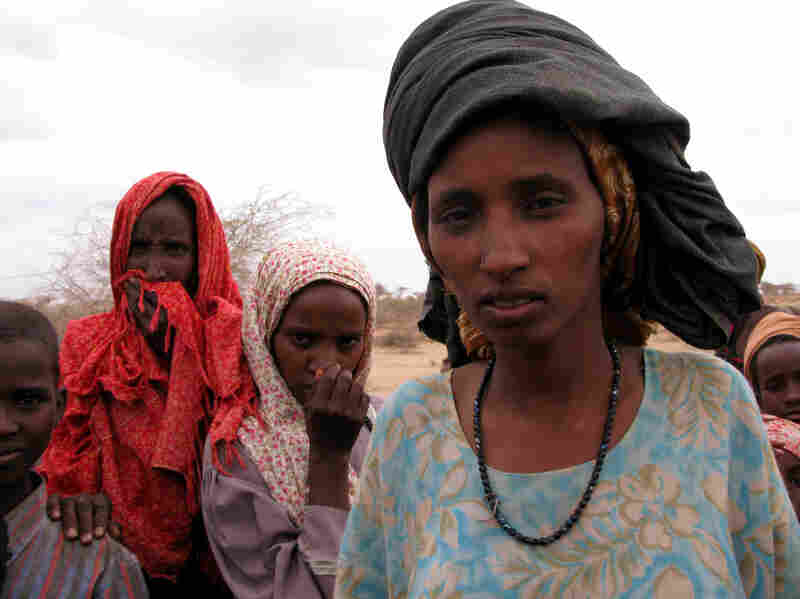 Saruuro Aden traveled on foot from southern Somalia across the Kenyan border with her four children. She says they walked for 10 days. Ofeibea Quist-Arcton/NPR hide caption

The White House has also expressed concern that any food aid for drought-stricken Somalia may fall into the hands of and benefit the militants.

Saruuro Aden traveled on foot from Dunsoor, near Baidoa in southern Somalia, across the Kenyan border with her four children. She said they walked for 10 days.

"Famine, drought — as well as conflict — all added up has forced us to leave Dunsoor," says Aden, speaking on the outskirts of Dagahaley camp this week, five days after she arrived.

"I encountered lots of problems, including an attack. All the money I had, all the clothes, everything was taken away from me. We don't know who the attackers were. It was at night," she says.

"They took only our personal effects, but we women were not sexually assaulted," she adds. Other female Somali refugees have reported that they were raped or abused by attackers.

Before heading off to look for firewood, Aden turns and says, "We have no food, we have no shelter. We have no clothes. We are just out there in the open, in the wind. We need water. We need life."

Dadaab settlement is run by the U.N. refugee agency. It was built to house 90,000 people in the early 1990s, when the conflict in Somalia broke out. That number has swelled to almost 400,000, plus the more than 30,000, say the Kenyan authorities, in June and July.

Responding to the famine in Somalia will be a challenge for donor nations. U.S. officials say the trouble is that al-Shabaab, an Islamist group on a U.S. terrorism blacklist, controls part of Somalia, making it too dangerous for aid workers.

But some aid groups say U.S. policy in the region is also preventing them from doing the kind of lifesaving work they want to do.

"Al-Shabaab has made life very difficult for our community in south-central, but it is not across the board and it is something we can negotiate on a case-by-case basis. And that's all we are really asking to do," Charny says.

Listen to the full story from NPR's Michele Kelemen.

Somalis are in search of help offered at the camps, provided by the U.N. and dozens of relief organizations — including some from the U.S. and all over the world.

Many of the women have trekked with severely malnourished children. Dr. Humphrey Musyoka, who works at the field hospital of the U.S.-based aid agency International Rescue Committee in Hagadera camp, says they have seen a fourfold increase of cases admitted for severe malnutrition since the influx of the recent arrivals.

"This leaves the children quite vulnerable, especially in the situation where food security is not guaranteed," he says. "We have seen children die – maybe, over the last week or so, two to three children. Those are the very severely ill children."

Musyoka says the main reason they are seeing the deaths of some children is because the patients arrive sometimes too far gone for the medical teams to be able to help.

"We are getting very many late arrivals, even into our nutrition program. So there is only so much we can do to salvage this kind of situation," he says.

Hawa Hassan, who is about 80 years old, cradles her 3-year-old grandson, Adan Abdon, in her arms on an IRC hospital bed at Hagadera.

With large, limpid eyes, it is clear Adan is suffering from acute malnutrition, with the telltale oversized head on his wasted, wizened body. He hardly whimpers. He does not smile or react. Adan's mother died of hunger, his grandmother says, during the 30-day walk from southern Somalia. 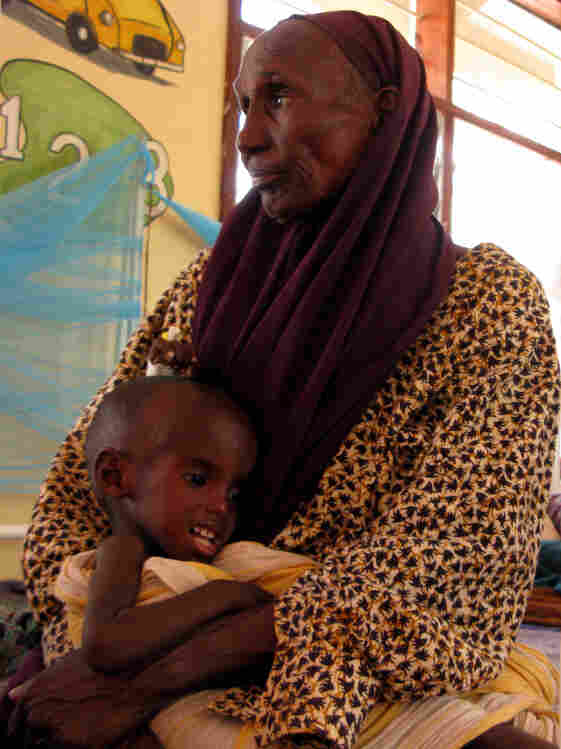 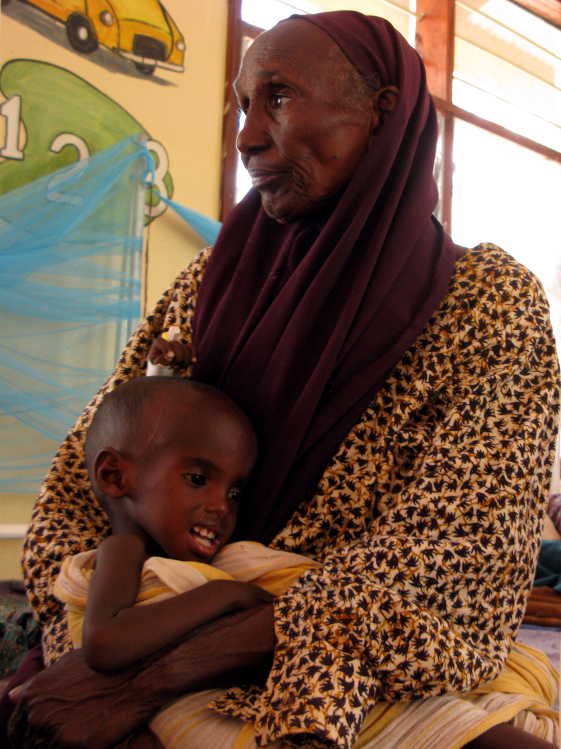 Hawa Hassan cradles her grandson, Adan Abdon, 3, who is suffering from malnutrition. Adan's mother died during the 30-day walk from southern Somalia to Kenya.

"All our animals died in the drought," she says, "so that was the end of our livelihood. We had to leave Somalia and walk to Kenya – with my grandchildren, including Adan, and you can see he is so very, very sick."

That is the problem, laments Abubakar Mohamed. He is the deputy field coordinator across town at another hospital run by the emergency medical charity MSF — or Doctors Without Borders — at Dagahaley camp.

Himself a Somali-Kenyan, Mohamed says the plight of the new arrivals is pitiful and no fault of their own.

Mohamed, who has been working at Dadaab refugee settlement since it opened more than two decades ago, says the first arrivals then were the victims of conflict, politics and poor leadership in Somalia.

He adds that the new refugees, though, "had no business in politics."

"Today, they are the victims of natural calamities like famine. They had no choice," he says. "So, unlike in the other times, it was politics, now it's a different scenario: innocent people who are suffering — not politicians, not armies, not military [but] real human beings, farmers, nomads who have had a tough time in Somalia."

The Kenyan government is under pressure from the U.S. and others to open up an additional camp, Ifo-2, to accommodate some of the recent influx of Somalis. But Kenya argues that the refugees would be best served being assisted back home, on the Somali side of the border.

It also points out that Kenyan nomadic herders and farmers across the arid and semi-arid north of the country are suffering from the same drought as the Somalis, and that resources and pastureland are limited.

Kenya says it fears that members of the al-Qaida-linked al-Shabab may surreptitiously cross into Kenya with the refugees, and spread terror on that side of the frontier.