Accessibility links
Death Toll Rises Dramatically In Norway Shooting Police say dozens of people were killed in a shooting spree at the youth camp of Norway's Labor Party. Police told reporters early Saturday they had discovered many more victims after initially reporting the death toll at 10. The shootings occurred after an explosion ripped open buildings in the heart of Norway's government Friday. 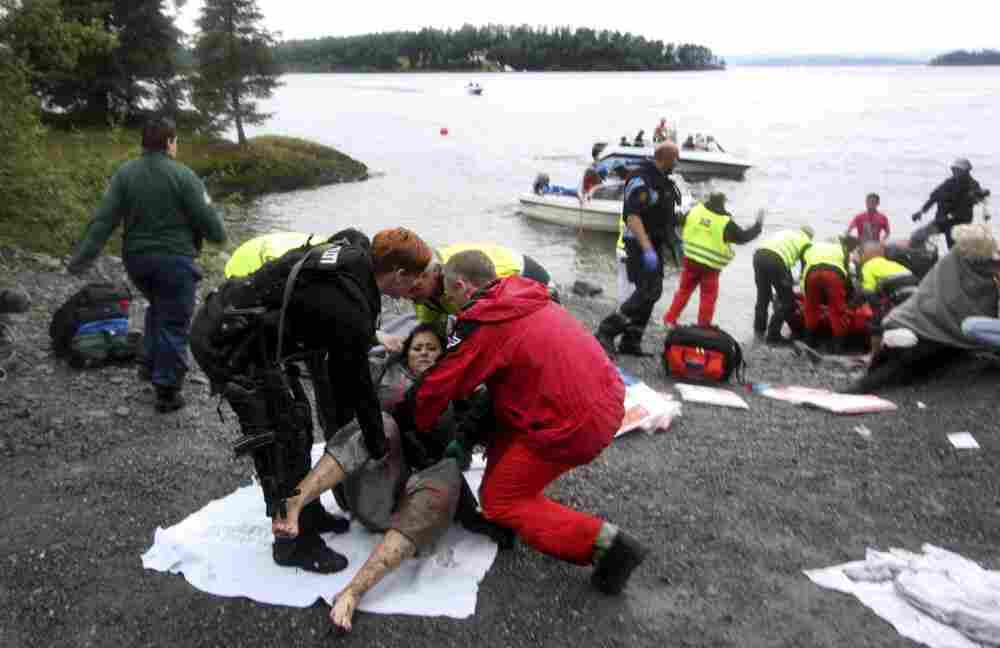 A wounded woman is brought ashore from Norway's Utoya Island after being rescued from a gunman who went on a killing rampage at a summer youth camp southwest of Oslo Friday. Svein Gustav Wilhelmsen/AFP/Getty Images hide caption

A homegrown terrorist set off a deadly explosion in downtown Oslo before heading to a summer camp dressed as a police officer to commit one of the deadliest shooting sprees in history, killing at least 80 people as terrified youths ran and even swam for their lives, police said Friday.

Police initially said about 10 were killed at the forested camp on the island of Utoya, but some survivors said they thought the toll was much higher. Police director Oystein Maeland told reporters early Saturday (shortly before 10 p.m. ET) that they had discovered many more victims.

"It's taken time to search the area. What we know now is that we can say that there are at least 80 killed at Utoya," Maeland said. "It goes without saying that this gives dimensions to this incident that are exceptional."

A suspect in the shootings, and the Oslo explosion that killed seven people, was arrested. Though police did not release his name, Norwegian national broadcaster NRK identified him as 32-year-old Anders Behring Breivik and said police searched his Oslo apartment overnight. NRK and other Norwegian media posted pictures of the blond, blue-eyed Norwegian.

A police official said the suspect appears to have acted alone in both attacks, and that "it seems like that this is not linked to any international terrorist organizations at all." The official spoke on condition of anonymity because that information had not been officially released by Norway's police.

"It seems it's not Islamic-terror related," the official said. "This seems like a madman's work."

The official said the attack "is probably more Norway's Oklahoma City than it is Norway's World Trade Center." Domestic terrorists carried out the 1995 attack on a federal building in Oklahoma City, while foreign terrorists were responsible for the Sept. 11, 2001 attacks.

The official added, however, "it's still just hours since the incident happened. And the investigation is going on with all available resources."

The attacks formed the deadliest day of terror in Western Europe since the 2004 Madrid train bombings, when shrapnel-filled bombs exploded, killing 191 people and wounding about 1,800.

The motive was unknown, but both attacks were in areas connected to the ruling Labor Party government. The youth camp, about 20 miles (35 kilometers) northwest of Oslo, is organized by the party's youth wing, and the prime minister had been scheduled to speak there Saturday.

A 15-year-old camper named Elise said she heard gunshots, but then saw a police officer and thought she was safe. Then he started shooting people right before her eyes.

"I saw many dead people," said Elise, whose father, Vidar Myhre, didn't want her to disclose her last name. "He first shot people on the island. Afterward he started shooting people in the water."

Elise said she hid behind the same rock that the killer was standing on. "I could hear his breathing from the top of the rock," she said.

She said it was impossible to say how many minutes passed while she was waiting for him to stop.

At a hotel in the village of Sundvollen, where survivors of the shooting were taken, 21-year-old Dana Berzingi wore pants stained with blood. He said the fake police officer ordered people to come closer, then pulled weapons and ammunition from a bag and started shooting.

Several victims "had pretended as if they were dead to survive," Berzingi said. But after shooting the victims with one gun, the gunman shot them again in the head with a shotgun, he said.

Track The News From Norway

Follow coverage of events in Norway via local media. Below, some links to Norwegian news outlets roughly translated by Google Translate:

"I lost several friends," said Berzingi, who used the cell phone of one of those friends to call police.

The blast in Oslo, Norway's capital and the city where the Nobel Peace Prize is awarded, left a square covered in twisted metal, shattered glass and documents expelled from surrounding buildings. Most of the windows in the 20-floor high-rise where Prime Minister Jens Stoltenberg and his administration work were shattered. Other buildings damaged house government offices and the headquarters of some of Norway's leading newspapers.

The dust-fogged scene after the blast reminded one visitor from New York of Sept. 11.

Ian Dutton, who was in a nearby hotel, said people "just covered in rubble" were walking through "a fog of debris."

"It wasn't any sort of a panic," he said, "It was really just people in disbelief and shock, especially in a such as safe and open country as Norway. You don't even think something like that is possible."

'Everyone In Oslo Could Hear It'

"First it was this huge explosion that ripped through the government buildings in the center of town," Hallvard Sandberg, a reporter for the Norwegian broadcaster NRK told NPR's Robert Siegel. "The sound was extremely loud and everyone in Oslo could hear it. They thought it was lightening, but it was not lightening. It was an explosion.

"The power of this blast was so huge that everything in sight was just [torn] to pieces," Sandberg said.

Police said the Oslo explosion was caused by "one or more" bombs.

The police official who spoke on condition of anonymity said the Oslo bombing occurred at 3:26 p.m. local time (1:26 p.m. GMT), and the camp shootings began one to two hours later. The official said the gunman used both automatic weapons and handguns, and that there was at least one unexploded device at the youth camp that a police bomb disposal team and military experts were working on disarming.

The suspect had only a minor criminal record, the official said.

National police chief Sveinung Sponheim said seven people were killed by the blast in downtown Oslo, four of whom have been identified, and that nine or 10 people were seriously injured.

Sponheim said a man was arrested in the shooting, and the suspect had been observed in Oslo before the explosion there.

Sponheim said the camp shooter "wore a sweater with a police sign on it. I can confirm that he wasn't a police employee and never has been."

Aerial images broadcast by Norway's TV2 showed members of a SWAT team dressed in black arriving at the island in boats and running up the dock. Behind them, people who stripped down to their underwear swam away from the island toward shore, some using flotation devices.

Sponheim said police were still trying to get an overview of the camp shooting and could not say whether there was more than one shooter. He would not give any details about the identity or nationality of the suspect, who was being interrogated by police.

Oslo University Hospital said 12 people were admitted for treatment following the Utoya shooting, and 11 people were taken there from the explosion in Oslo. The hospital asked people to donate blood.

Stoltenberg, who was home when the blast occurred and was not harmed, visited injured people at the hospital late Friday. Earlier he decried what he called "a cowardly attack on young innocent civilians."

"I have message to those who attacked us," he said. "It's a message from all of Norway: You will not destroy our democracy and our commitment to a better world."

NRK showed video in Oslo of a blackened car lying on its side amid the debris. An AP reporter who was in the office of Norwegian news agency NTB said the building shook from the blast and all employees were evacuated. Down in the street, he saw one person with a bleeding leg being led away from the area.

An AP reporter headed to Utoya was turned away by police before reaching the lake that surrounds the island, as eight ambulances with sirens blaring entered the area. Police blocked off roads leading to the lake.

"It's a reminder that the entire international community has a stake in preventing this kind of terror from occurring," President Barack Obama said.

Obama extended his condolences to Norway's people and offered U.S. assistance with the investigation. He said he remembered how warmly Norwegians treated him in Oslo when he accepted the Nobel Peace Prize in 2009.

Nobel Peace Prize Chairman Thorbjorn Jagland said it appeared the camp attack "was intended to hurt young citizens who actively engage in our democratic and political society. But we must not be intimidated. We need to work for freedom and democracy every day."

A U.S. counterterrorism official said the United States knew of no links to terrorist groups and early indications were the attack was domestic. The official spoke on condition of anonymity because the investigation was being handled by Norway.

At least two Islamic extremist groups had tried to take credit for the attacks. Many intelligence analysts said they had never heard of Helpers of Global Jihad, which took initial credit. The Kurdish group Ansar al-Islam also took credit on some jihadist web sites.

Norway has been grappling with a homegrown terror plot linked to al-Qaida. Two suspects are in jail awaiting charges.

Last week, a Norwegian prosecutor filed terror charges against an Iraqi-born cleric for threatening Norwegian politicians with death if he is deported from the Scandinavian country. The indictment centered on statements that Mullah Krekar the founder of Ansar al-Islam made to various news media, including American network NBC.

Terrorism has also been a concern in neighboring Denmark since an uproar over cartoons of the Prophet Muhammad six years ago.