Accessibility links
Heat: The 'Most Dangerous Natural Disaster' As temperatures in the eastern and central United States reached triple-digits, public health workers mobilized to help the elderly and others affected by the heat. "More people die from the heat in this country than all the other natural disasters combined," says Chris Gallagher of the Philadelphia Corporation for Aging.

Much of the eastern and central United States remains under an excessive heat warning Saturday morning. Triple-digit temperatures neared or exceeded record highs from Missouri to Massachusetts this week. In Philadelphia, the mercury topped out at a sultry 104 degrees on Friday. Public health workers mobilized to help the elderly and others affected by the heat.

Earlier in the week the heat caused the pavement to buckle on an on-ramp connecting the Commodore Barry Bridge to Interstate 95, just south of Philadelphia. Construction crews had to make emergency repairs to get the ramp open again. If the heat is doing that to pavement, imagine what it's doing to people. 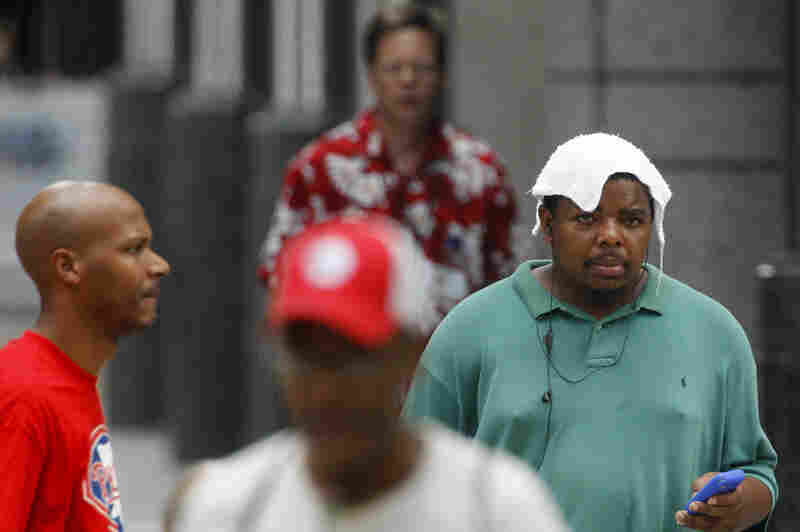 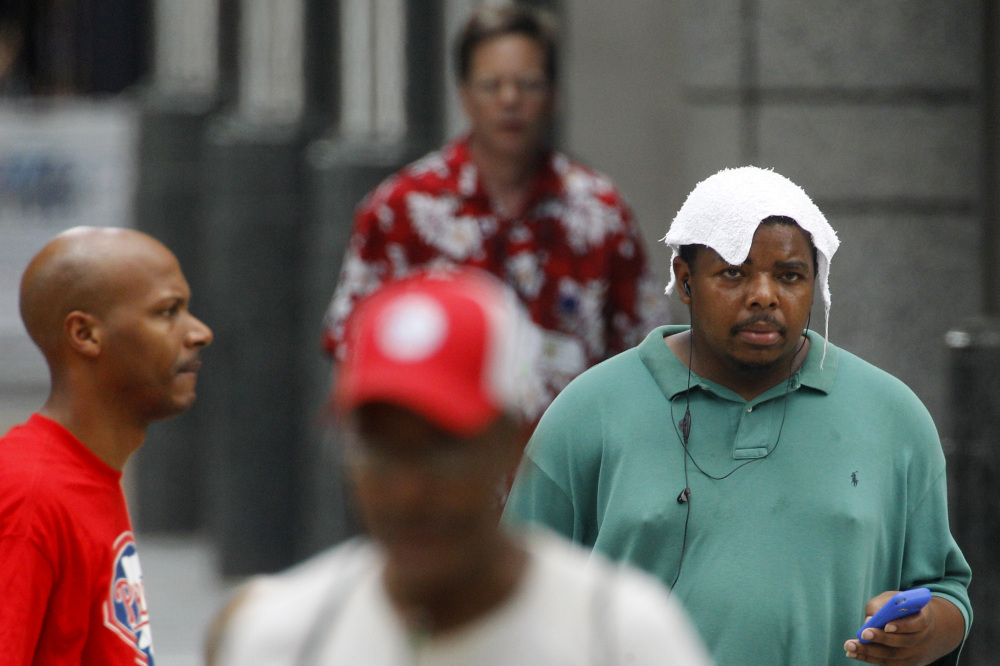 Pedestrians walk along Market Street in Philadelphia on Friday, as the temperature topped 100 degrees.

"It is the most dangerous natural disaster. More people die from the heat in this country than all the other natural disasters combined," says Chris Gallagher of the Philadelphia Corporation for Aging.

Gallagher says the young and the old are the most vulnerable.

"A lot of times it is the heat exacerbating some other type of medical condition. But sometimes it still is just the heat. The core body temperature of somebody raises too high, and they die," he says. "But any heat-related death is preventable. So that's why we're here, to try to raise awareness and keep people out of that dangerous area."

Gallagher directs the "heat line," a phone bank run by the Philadelphia Corporation for Aging and the city health department. Staff members advise seniors who don't have air conditioning to go somewhere that does, like a movie theater or mall. And when that isn't possible, they offer other tips on keeping cool without air conditioning.

Nurses from the city health department are also on hand to talk with callers who may have urgent medical problems. And if they're worried, the nurses dispatch emergency response teams to check on the callers in person. Gallagher says the calls tend to get more serious as the heat wave drags on.

"If you just have a hot day, you know that can be dangerous for some people, especially if you're dealing with a lot of activities or something," he says. "But let's say at nighttime, your house cools off. Next day, you start fresh. Your body temperature is regulated. And what gets really dangerous right now is the nighttime temperature does not really cool things off, like it does in other times."

Up and down the East Coast, public health officials offered extended hours at cooling centers to give seniors and others a place to escape from the heat. The Philadelphia Senior Center also gave away 300 free window fans on Thursday. And seniors Josie Miller and Martin Krasner hung around to take advantage of some free air conditioning.

"It was very hot. And I needed some place to cool off, because I don't have an air conditioner. I'm dripping wet in the middle of the night, so I'm constantly thinking of cool places to go," Miller says.

"It's cold in here. It feels great. If I stay home and put the air on, it costs me money. Here I don't have to pay for it," Krasner says.

For those brave enough to venture outside, public pools were a popular destination. New York officials offered extended hours at state beaches and city pools. The mayor of Allentown, Pa., made his city's swimming pools free. In Philadelphia, lines were so long at municipal pools that some residents, like Melissa Biondi's two kids, took a dip in the public fountains instead.

"This was totally spur of the moment. We just came out to play in the fountain, and now we have a really wet drive home," Biondi says.

Biondi's children jumped in — T-shirts, shorts and all — to swim with sculptures of frogs and turtles in the city's biggest fountain. Bobby and Sharon Charthern went in fully clothed, too.

"[I went in] to cool off. It's almost 100 degrees! I had to cool off," Bobby Charthern says. "Even sitting in the shade I was hot. So I decided to get in the water."

Sharon Charthern of West Philadelphia said she and her "grandbabies" came to the fountain to cool off. "And good grief!" she says.

Massive Heat Wave Could Cause Corn Prices To Pop July 22, 2011