Accessibility links
Comic-Con 2011: Guillermo del Toro Makes An Offer To Eager Fans Neda Ulaby reports that a Comic-Con panel discussion with writer-director Guillermo del Toro led to an intriguing offer to fans who might be looking for an opportunity to get really up close and personal with the films they love. 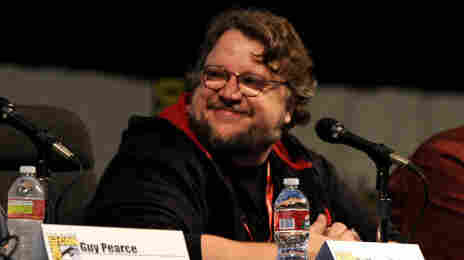 Someone asked me what Comic-Con panels I was most excited about and I almost could not answer.

These three days are about rooting for stories, taping sound for stories, cooking up ideas for stories. I'm really excited about the performance capture panel, but that's probably not what that person meant, right?

Then — there's Guillermo del Toro. I am just going to announce right now that I struggle with journalistic objectivity when it comes to GDT. The guy is so insanely engaging, so wildly informed, and his visual aesthetic is simply the living end. (Shut up, fan girl!)

The point is that I did attend, um, two GDT panels, all in the name of improving NPR's pop culture coverage. And here's what I gleaned. His new movie, Don't Be Afraid Of the Dark, looks stupendously creepy. No one can work the scariness of a keyhole better than GDT, as anyone who's seen The Devil's Backbone can attest. (I remain a little concerned about the plot. Plots are not my beloved GDT's strongest suit.)

But the best thing about seeing him, especially in the company of director Jon Favreau, was how much they both relished their interaction with fans. It was, clearly, like oxygen. (Not the network.) One of the highlights was when GDT announced that he routinely picks future production assistants from the fans he meets at Comic-Con and brazenly announced a personal-sounding Gmail address to recruit a few from among the thousands of people crowding Hall H for his new big budget film now in production, Pacific Rim.

Way to give back.