Accessibility links
Read His Lips: No New Taxes In Washington, anti-tax advocate Grover Norquist is seen either as a unifying force or a dangerous ideologue. And during the current budget stalemate, his influence looms larger than ever. 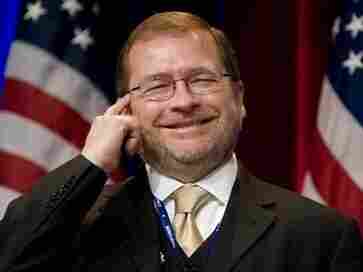 President Obama and Speaker Boehner may be the center of attention in Washington right now, but just behind the scenes — and controlling a significant part of the discussion — is anti-tax advocate Grover Norquist.

In 1986, Norquist's group Americans for Tax Reform came up with a simple document with two simple messages:

ONE, oppose any and all efforts to increase the marginal income tax rates for individuals and/or businesses; and TWO, oppose any net reduction or elimination of deductions and credits, unless matched dollar for dollar by further reducing tax rates.

The Taxpayer Protection Pledge has since been signed by the vast majority of Republicans running for seats on Capitol Hill — including more than 250 current members of the House and Senate. And reportedly, some lawmakers have begged Norquist to relieve them from their pledge so they can strike a deal with the president and end the country's slide towards default.

Norquist, however, told weekends on All Things Considered host Guy Raz that any raise in net taxes is unacceptable. "Until you say 'no' to tax increases, you don't even begin a conversation about spending restraint or reforming government," Norquist said. "When you raise taxes, the politicians spend the money. You cannot reduce the size of government while increasing taxes."