Accessibility links
On Life And Ideas: A Relative's Ashes Reclaimed Famous Viennese psychoanalyst Alfred Adler died in 1937, but the whereabouts of his remains were unknown to his only grandchild until recently. Adler's ashes were brought to his birthplace this month, where he was buried alongside the likes of Beethoven. 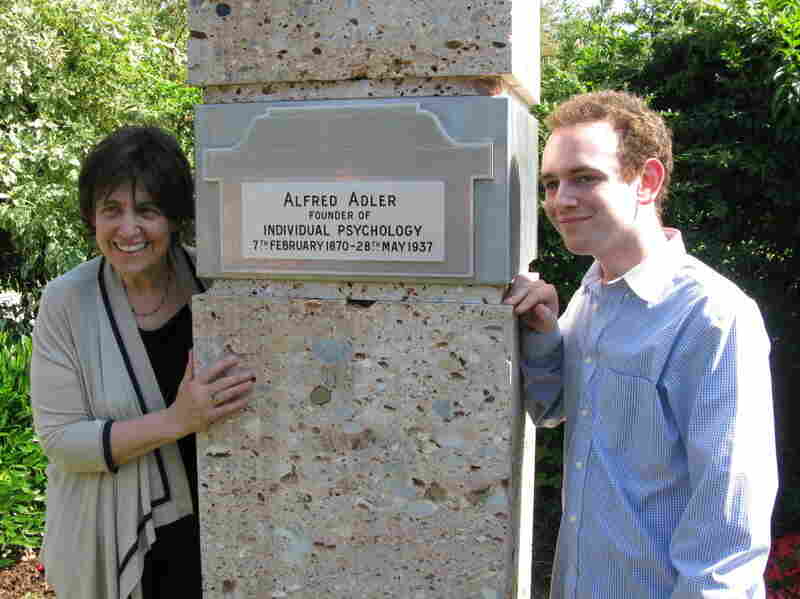 NPR's Margot Adler and her son, Alex Gliedman-Adler, at the cemetery at the Zentralfriedhof, where her famous grandfather was buried. Alfred Adler, the "Founder of Individual Psychology," died in 1937. Margot Adler hide caption 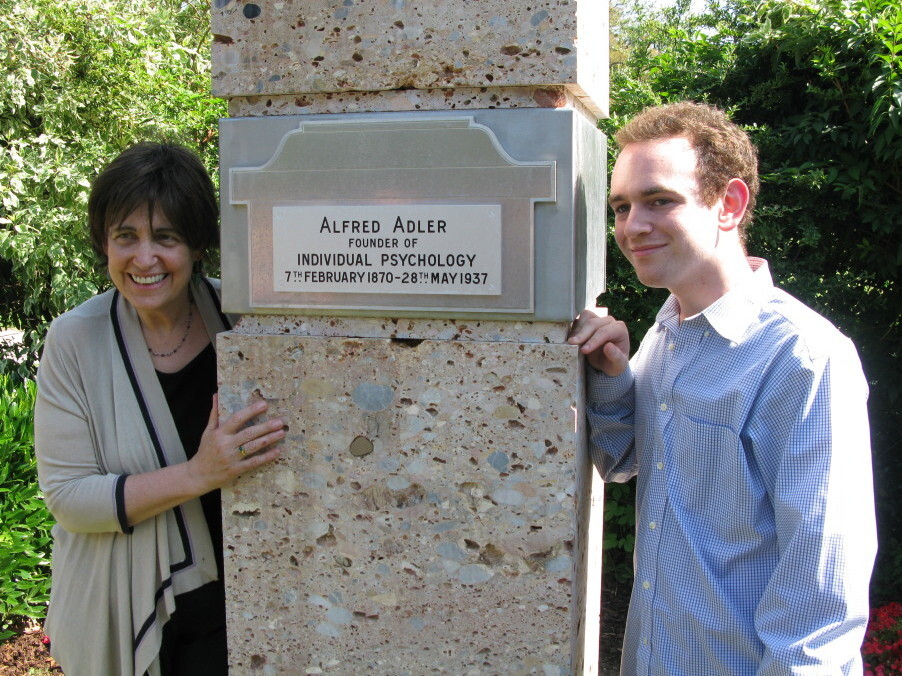 NPR's Margot Adler and her son, Alex Gliedman-Adler, at the cemetery at the Zentralfriedhof, where her famous grandfather was buried. Alfred Adler, the "Founder of Individual Psychology," died in 1937.

My grandfather's ashes had been missing for 74 years. He was a famous Viennese psychoanalyst: Alfred Adler, the man best known for inventing the inferiority complex and for splitting with Freud in 1911 over issues of sex and power. In 1937, he died of a heart attack while lecturing in Aberdeen, Scotland. Growing up as Adler's only grandchild, I never heard anyone talk about the whereabouts of his remains.

But over the years, a number of psychotherapists started searching. Christine Rosche, the head of the Alfred Adler Institute in Vienna, was one of those people. Over the years she had asked, "Where is the grave?"

But the ashes weren't in Aberdeen. The psychotherapists teamed up with John Clifford, the honorary Austrian consul to Scotland, and they looked some more. Then one day, they found a small wooden box containing the ashes in a crematorium in Edinburgh. It said, "Alfred Adler, founder of Individual Psychology." The crematorium was right near Clifford's office.

"It was there all along," Clifford says. "Ten minutes away from me, he was sleeping almost under my pillow."

Since none of Adler's four children were still alive, I had to prove to the crematorium in Edinburgh that I was the heir and could make the decision to take the ashes back to Vienna, where Adler was born.

On July 12, 74 years after his death, I joined about 100 people at the Zentralfriedhof in Vienna along with my 20-year-old son, Adler's only great-grandchild, for the ceremony. It's the largest cemetery in Vienna; Beethoven, Brahms and Schubert are buried there.

Other relatives of Adler came to the ceremony, including cousins from Amsterdam like Suzanne Hoogendijk. At the age of 15, she hid from the Nazis for two and a half years, just like Anne Frank. But she survived. And here she is, an 86-year-old former judge, who says that being in Vienna for this ceremony makes her feel "very rooted."

She actually remembers Adler. He visited her parents, and she was irritated at the way her parents treated him like a guru. They asked for advice about her education, and she remembers that he told them "to take care that I shouldn't marry someone who was too neurotic."

The Austrian media had a field day. I was suddenly on the other side of the microphone, interviewed by radio, a newspaper and a magazine. Over coffee and pastries at the Cafe Landtmann, where Freud used to go, I was repeatedly asked, "How come your family didn't know where the ashes were?"

I think the real answer is this: In 1937, Adler's favorite daughter had already been arrested in the Soviet Union and was in the gulag where she would die some years later. The Nazis were on the rise. The Adlers moved permanently to the United States in 1935. They weren't religious.

"My family was more concerned with life and ideas than with ashes," I told the interviewers.

Still, there was something mysterious about this 74-year journey. At the ceremony there were music, flowers and a ridiculous number of psychotherapists.

One speaker, representing culture and science for Vienna, said this is the city of psychoanalysis, but Adler's findings about the human mind belong to the whole world.