Accessibility links
Flow Of Somali Refugees Strains Kenyan Town Thousands of refugees continue to flee drought, famine and conflict in Somalia, seeking shelter and food in neighboring Kenya. But Kenya too is suffering from drought in the arid and semi-arid north of the country.

Thousands of refugees continue to flee drought, famine and conflict in Somalia, seeking shelter and food in neighboring Kenya. But Kenya too is suffering from drought in the arid and semi-arid north of the country.

The northeastern Kenyan town of Dadaab is already home to more than 400,000 Somali refugees. Many younger Somalis have never been to Somalia or have spent almost their entire lives in the refugee camps in Kenya. In the past few weeks, thousands more Somalis have crossed the border to escape hunger and famine at home.

"It's not interesting to live in a refugee camp because a lot of your rights are not there," says Bernard Ole Kipury, Kenya's acting district commissioner for Dadaab. "If you want to move from Dadaab to Nairobi, you need a movement pass. If you want to move from any part of the camp, you need a movement pass. So your freedoms are in some way curtailed."

That's likely the least of the problems for thousands of Somali refugees, including malnourished children, who continue to stream over the border into Kenya in search of food and peace.

Sadiya Kassim Mohamed is one of them. 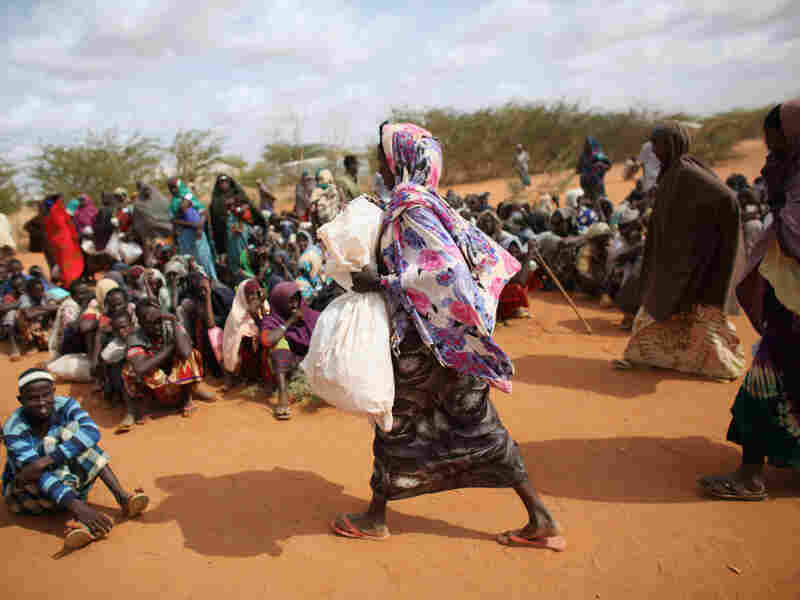 A Somali refugee woman carries a bag of food aid at the entrance to the registration area of the Dadaab refugee settlement in Kenya. While refugees receive international humanitarian aid, local Kenyans fighting drought get sacks of rice, beans and oil from the government. Oli Scarff/Getty Images hide caption 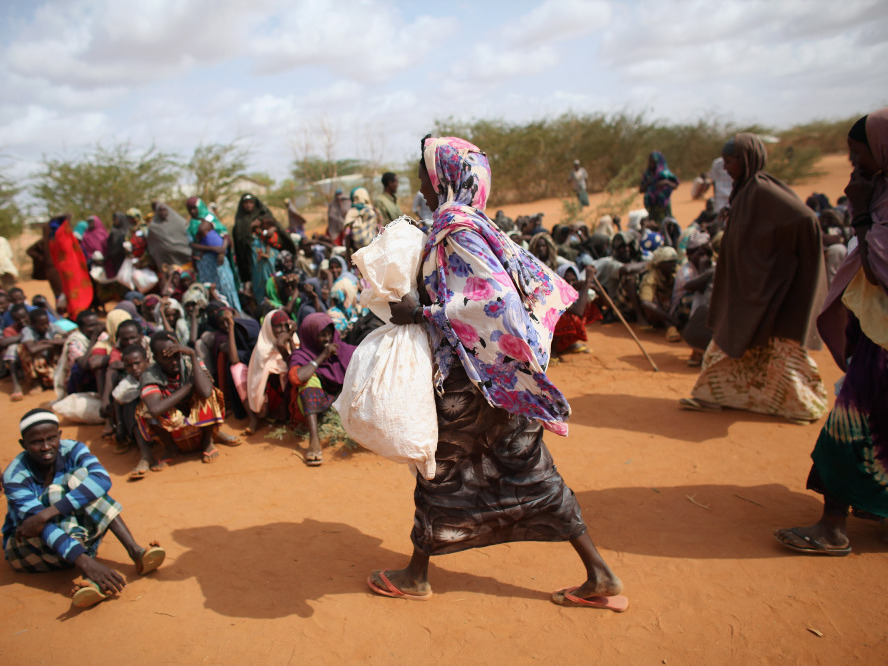 A Somali refugee woman carries a bag of food aid at the entrance to the registration area of the Dadaab refugee settlement in Kenya. While refugees receive international humanitarian aid, local Kenyans fighting drought get sacks of rice, beans and oil from the government.

"On my way to the camps, we were attacked by bandits twice, and they even stripped everyone naked. We were all stripped. All of us, including the women, men and even the children, were stripped naked, and myself," Mohamed says through a translator. "I begged them. I begged for mercy. Before he took off my clothes forcefully, I had a 4-month-old baby who was on my back. He asked me, 'Take off your clothes.' When I hesitated, he began pulling them one after the other. I was feeling helpless and with no protection."

The flood of Somalis into Kenya puts increased pressure on scarce resources and the local host community in Dadaab. The host community is less than half the size of the refugee population. The government's refugee camp officer, Haron Komen, says people must remember that northern Kenya too is experiencing a crippling drought. He says the drought affects the nomadic herders and their livestock, and is exacerbated by the influx of Somali refugees.

"It has actually worsened the situation. We are in a very fragile geographical environment here. We are in semi-arid and arid land, where the vegetation is quite scanty," Komen says. "It has quite been a challenge."

There's potential for more trouble, he warns, despite a sympathetic and supportive local Somali-Kenyan community.

"The little resources that are there, they are shared with them, the water, the space for grazing, so conflict is bound to arise," Komen says. "The refugees, when they receive the food, [some of it] needs to be cooked. And that cooking actually requires fuel. Fuel means cutting down the trees to be able to get the fuel."

Raised voices and a chaotic air of desperation overwhelm an attempt at food distribution in Dadaab. While the refugees are looked after by international humanitarian agencies, needy drought-weakened Kenyans are being given sacks of rice, beans and oil donated by the government. The authorities say some locals have registered as refugees. Angry women and men argue furiously over who gets what as officials struggle to divvy up the supplies.

One local leader trying to pacify the Kenyans in search of food aid is Abdizamed Hussein Hassan, an elder in the Dadaab community. He says he's had experience avoiding run-ins between the Somali refugees and the host Somali-Kenyan population.

"We have a lot of disturbances from the refugees. Sometimes the refugees are looting cattle and cows, goats, because of hunger," Hassan says. "Our role is to sit with them and to find solution to stop their looting. There is a dialogue between them and us. If there is a fight, we sit down and make solutions."

Even more serious are reports of weapons circulating within the Dadaab complex. The Kenyan refugee camp officer, Komen, says this is a major concern to the government.

"It is also putting pressure on our security. We don't have enough personnel to man all the borders. It is porous," he says. "So, what is the implication of having a large number of people over which you don't control? You have no idea who could be a threat to security. That is complicated by the presence of al-Shabaab and possibly al-Qaida operatives in Somalia."

Kenya says the international community must do much more to curb anti-Western al-Shabaab militants in neighboring Somalia, restore a central government and return the refugees home. An extension of the camp complex is ready to open in Dadaab. But Kenya stands accused of dithering, saying it needs guarantees of security.