Accessibility links
Amateur Fossil Hunter Makes Mammoth Find In Florida A carving of a mammoth or mastodon on a fossilized bone, found years ago in Vero Beach, is being recognized as important early art. The find has sparked new interest in a site first excavated nearly a century ago. 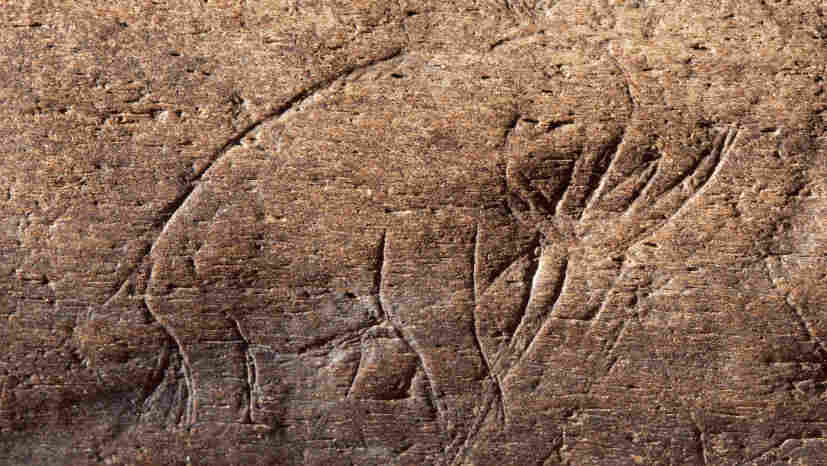 James Kennedy, an amateur collector, found this fossilized bone with a mammoth or mastodon engraving in Vero Beach, Fla. It has been identified as one of the oldest pieces of prehistoric art in the Western Hemisphere Chip Clark/Journal of Archaeological Science hide caption 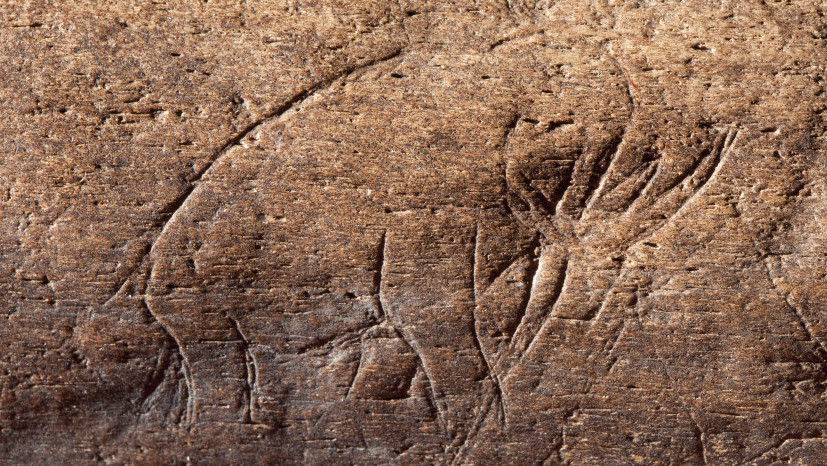 James Kennedy, an amateur collector, found this fossilized bone with a mammoth or mastodon engraving in Vero Beach, Fla. It has been identified as one of the oldest pieces of prehistoric art in the Western Hemisphere

It's one of the most significant pieces of prehistoric art ever found in North America — a carving of a mammoth or mastodon on a piece of fossilized bone dating back to the Ice Age. An amateur fossil hunter found it several years ago in Vero Beach, Florida. Now, after three years of study, a team of researchers say they believe it's authentic.

James Kennedy is quick to tell you, he doesn't know all that much about archaeology — or prehistoric art.

"I mean I'm not a scientist. I just go out and dig up bones good. I'm good at finding them. That's one thing I do do, buddy," he says with a laugh.

Kennedy is 41, with sandy blond hair and a goatee. Around his neck, he wears a large prehistoric shark tooth. At his house in Vero Beach, boxes of fossils are everywhere. 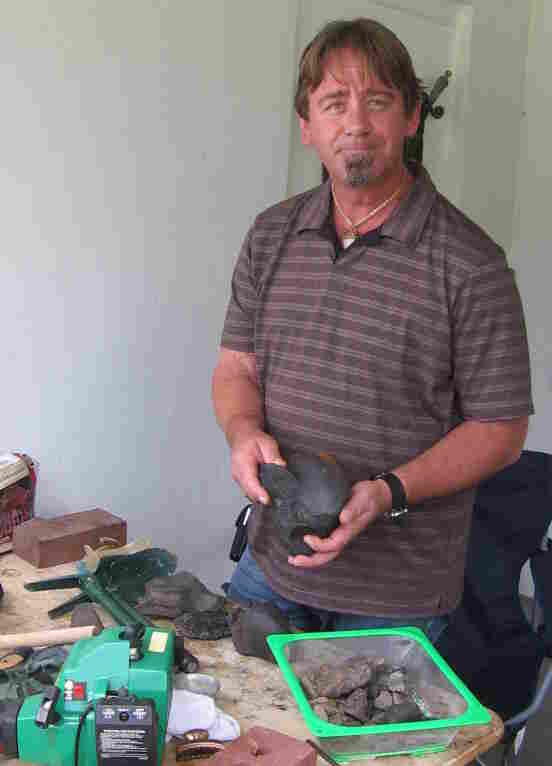 Amateur collector James Kennedy with some of the fossils he's collected in Florida. Kennedy found the carved bone four or five years ago, but didn't notice the carving until a few years later when he cleaned it. Greg Allen/NPR hide caption 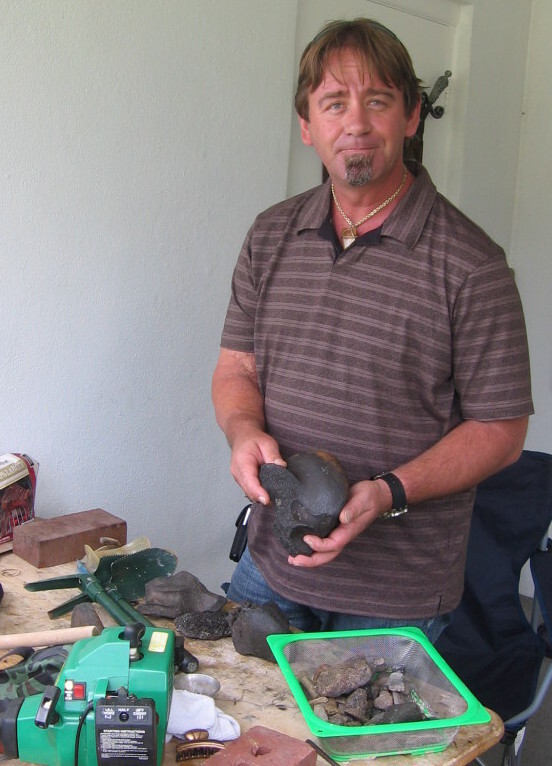 Amateur collector James Kennedy with some of the fossils he's collected in Florida. Kennedy found the carved bone four or five years ago, but didn't notice the carving until a few years later when he cleaned it.

Mammoths and mastodons were abundant in Florida until about 13,000 years ago — when they became extinct.

While there are lots of fossilized bones, the one thing never found in the Western hemisphere were any images of these Ice Age elephant ancestors — such as those found in European cave paintings.

That is, until now. In an article published in the Journal of Archaeological Science, researchers from the Smithsonian and the University of Florida say that the depiction of the mastodon or mammoth engraved on a fossilized bone appears to be an authentic piece of art dating back at least 13,000 years.

At Kennedy's kitchen table, he looks at a picture of the engraved bone. The original is stored in a vault.

For more than two years, it sat in a box under his kitchen sink. He says he picked it up at a site in Vero Beach in 2006 or 2007. He immediately recognized it as a piece of fossilized bone, probably from a mammoth or mastodon — about 15 inches long and four inches high.

He says he didn't see the engraving on it until a couple of years later, when he was cleaning some of his fossils. On this one, as the dirt came off, a picture emerged.

"First I thought it could be just scrapes and marks on it, but no, there's no mistaking it. You have a walking mammoth right there. I mean, here's his tail, his tusk, his trunk, everything's there," Kennedy says. "I thought it was really neat, but I thought that there was lots of other stuff like this. I had no idea there was nothing else like that."

In fact, it's one of a kind. Although there are stone points and other archaeological evidence suggesting humans lived in North America during the Ice Age, it may be the only piece of art in the Western hemisphere dating back to that period.

In Vero Beach, standing under an umbrella in a Florida rainstorm, archaeologist Barbara Purdy says she was wary when Kennedy first showed her his discovery.

"Well, we were very skeptical of course. Nothing like that had ever been found in the Western Hemisphere before," she says. "And it would be nice if we had another one somewhere."

Part of the reason archaeologists are cautious to accept the Florida find is because they've been deceived by forged mammoth carvings before. 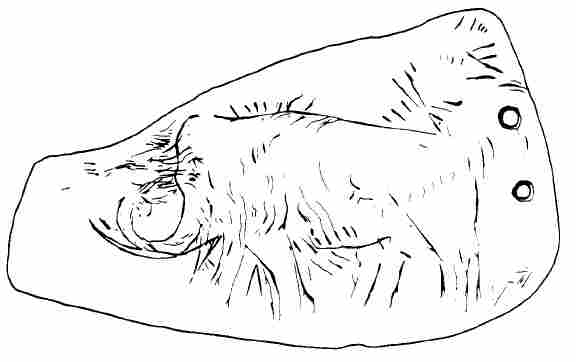 Holly Oak Pendant — Delaware
The pendant is a piece of shell engraved with the image of a mastodon. It was allegedly found in a peat bog in 1864 and was identified as a piece of Paleoindian art. In the 100 years after its discovery, it was displayed worldwide but its authenticity was eventually questioned in the 1970s. Radiocarbon testing dated the pendant to A.D. 885, putting it nowhere near its purported age of 10,000 years old. It is believed that the "discoverer" forged the pendant at the same time a similar, legitimate mammoth carving was found in France.

Researchers at the University of Florida conducted extensive testing of the fossilized bone. Rare earth element analysis showed it did come from the Vero Beach area. A scanning electron microscope indicated the carving appeared to be the same age as the bone.

Archaeologist Jeff Speakman conducted his own extensive testing and research on the fossil at the Smithsonian. Despite his group's best efforts, he says they couldn't find anything to suggest the mammoth engraving is a fake.

"The lines — very clean, well-rounded — did not have any sort of debris field or sharp lines that would indicate any sort of modern forgery," Speakman says

What would really help convince researchers that the piece of Ice Age art is authentic would be to find other examples. That's why Purdy and Speakman have come out to stand in the rain in Vero Beach — not far from where Kennedy says he found his fossil.

For archaeologists, this is a well-known spot — the Old Vero Ice Age Site. It was first excavated nearly a hundred years ago. In 1915, Florida's state geologist documented fossilized human skeletons found alongside remains of Ice Age mammals.

The age of those human remains was later disputed by other scientists, and the Old Vero site became known mostly as a spot popular with amateur fossil hunters — people like Victor Zinck.

"When we first came here, I could walk the edge of this bank and pick up bison teeth, broken elephant teeth just laying scattered all over the ground," Zinck says. "It was quite a place."

Zinck is at the site to give archaeologists practical advice on where they may want to dig. The University of Florida has put together a proposal to fully excavate the site.

Purdy says, although the Old Vero site was first discovered more than a century ago, it's been investigated mostly by paleontologists up to now.

"And the archaeology has sort of gone begging. So now, if we can get a combination of both working together, I think it will work out a little bit better," she says.

A group in Vero Beach — the Old Vero Ice Age Sites committee — is working to raise the money to fund the project.

As for James Kennedy's fossil — the engraved bone that has sparked the renewed interest in Vero Beach — both the University of Florida and the Smithsonian may have to be content with replicas they've cast from the original.

Kennedy plans to offer his find for sale at auction. The going price for a piece that's been described as the "oldest, most spectacular and rare work of art in the Americas" is likely to be well out of their budgets.