Accessibility links
One Woman's Struggle To Shed Weight, And Shame Kara Curtis is one of 70 million obese Americans, and the issue dominates her life. Curtis, 37, has seen every dress size from 26 to 6. Despite countless diets and untold resources spent on fitness, she says, "I'm morbidly obese. And it's just overwhelming." 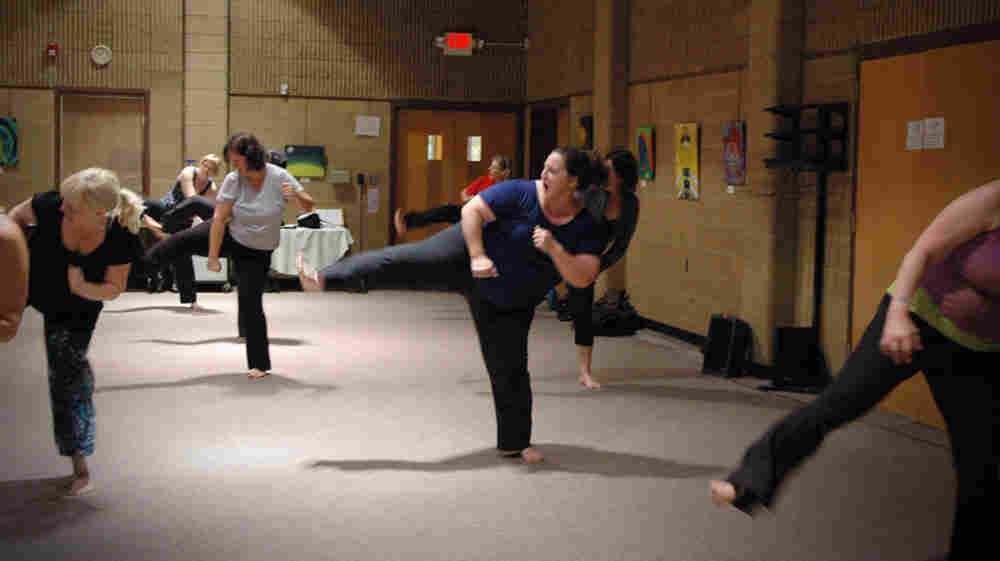 Kara Curtis has poured all her energy and untold resources into trying to get fit. But she admits that what she really needs is not to burn more calories but to eat less. Tovia Smith/NPR hide caption 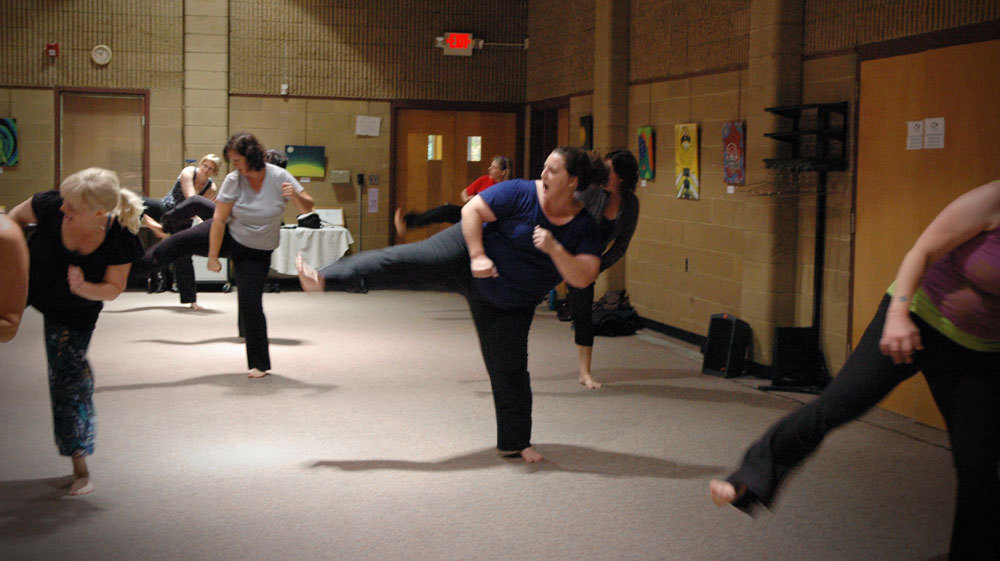 Kara Curtis has poured all her energy and untold resources into trying to get fit. But she admits that what she really needs is not to burn more calories but to eat less.

Part of an ongoing series on obesity in America.

In her 37 years, Kara Curtis has seen every dress size from 26 to 6. Looking through old photos, in her slimmer days, you see a young girl standing tall and pretty in her tiara as high school prom queen, and strong and lean in team shots of her track and swim teams.

Growing up in rural upstate New York, Curtis and her family were totally into fitness and nutrition. Her mom used to send her to school with a lunchbox packed with liverwurst on homemade whole-wheat pita, topped with sprouts grown in their kitchen cabinet. It kind of makes sense, Curtis says, that she went a bit crazy for chocolate and cheesy stuff when she was finally living out on her own. But it still took her by surprise after college when she gained nearly 100 pounds in a year. 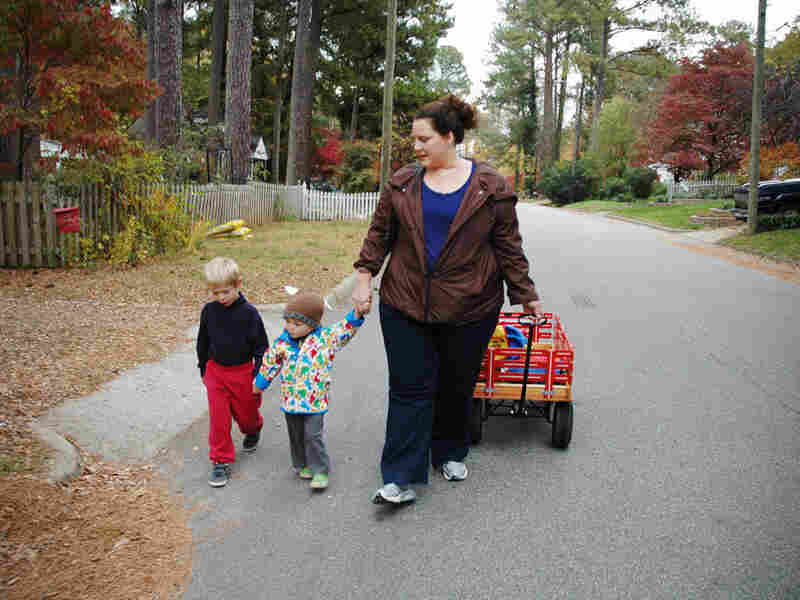 As part of her exercise routine, Curtis starts most mornings walking a gaggle of neighborhood toddlers to their day care. Tovia Smith/NPR hide caption 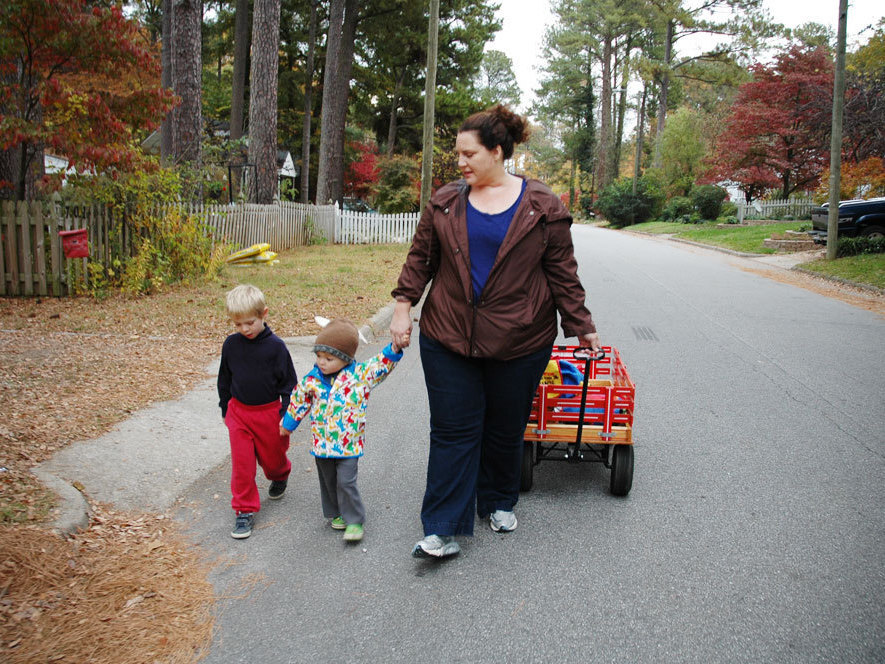 As part of her exercise routine, Curtis starts most mornings walking a gaggle of neighborhood toddlers to their day care.

"I remember the first time I ever heard myself called obese — it was terrible," Curtis recalls. She was at her doctor's for a regular check up when he started dictating notes in front of her, describing her as "an obese 22-year-old." "I was just shocked to hear the word obese related to me." Curtis says.

Indeed, as one of the 70 million Americans who are obese, Curtis has watched her weight become the overriding fact of her life. It's why she put off buying a new car, and stuck with a less-than-fulfilling job (she worried her size would limit her options.) It's why she bought a custom-made bathrobe and porch swing and why she can't comfortably go to the movies or get on a bike or in a boat.

"I love to kayak, but I haven't been in years because I'm afraid my hips will get stuck," she says.

At 300 pounds, every day is a struggle with the little things — like chafing on her inner thighs or tying her shoes — and with the biggies — like love. With bright eyes and high cheekbones, Curtis is as pretty as she is engaging and witty. And she's into kids and family, but totally down on the idea of ever getting back into dating.

More About The Series

Over the next few months, NPR's series Living Large: Obesity In America will explore what it means to live in a nation where one in three adults is obese. The crisis affects tens of millions of people and is altering daily life in fundamental ways. NPR will report from the factory floor, the office cubicle, the school cafeteria, the airport and the doctor's office. And since soaring obesity rates are in large part a phenomenon of recent decades, our reporting will seek to examine how we got to this point.

We'll examine how the nation is changing to accommodate its obese population and the ethical implications of these accommodations. We'll look at the economics of obesity on individuals, employers and society and take the story across the nation to examine obesity in the workplace, in popular culture and fashion. And we'll also report on "acceptance movement" that demands an end to size discrimination.

"It's not like I can just fix myself and be done," she says. "If you lose the weight, you're still stuck with the stretch marks and the extra skin, and the toll you've taken on your body already. And I'm probably still not going to be excited about getting naked with somebody."

She has poured all her energy and untold resources into trying to get fit. But it's hard to stay motivated, Curtis says, when the challenge begins to look not just difficult, but impossible.

"Really, if there was an easy solution, Oprah would have bought it," she says.

There is little that Curtis hasn't tried. Making breakfast one day — a pureed concoction of hemp and rice protein, coconut milk and avocado — she recalls the gamut: macrobiotic diets, Weight Watchers, Overeaters Anonymous, acupuncture, aerobics, meditation, therapy and all kinds of exercise — from punishing pre-dawn runs to what she calls more "joyful movement."

She starts most days with a vigorous hour-long walk, escorting a group of neighborhood toddlers to their day care. Pulling several kids piled into a big red wagon, she breaks into a sweat just minutes into the mile-long trip. Several times a week, she sweats through a rigorous dance or yoga class.

But sitting down later to a lunch of a squash soup, Curtis concedes that what she really needs is not to burn more calories but to eat less. And yet every time she tries to diet, she ends up binging.

"This is not a simple thing," she sighs. "There are genetic components. I mean, I look just like [my] grandmother and my aunts." Looking back, Curtis says, she has battled serious food addiction and body image issues since she was a little girl. "Clearly, there is this piece that is programmed in."

But it's not the only piece, Curtis says.

She's as conflicted about what's behind her obesity and how to deal with it as society seems to be. 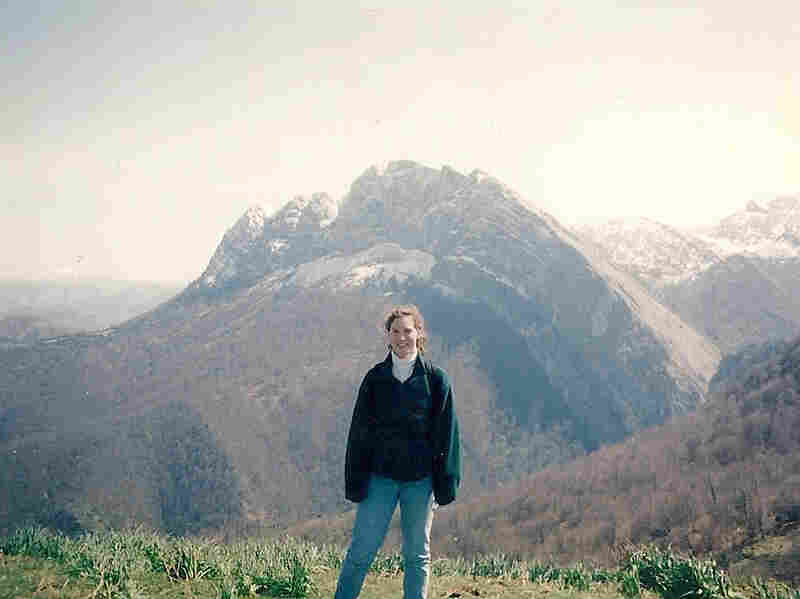 Curtis in 1994 hiking in Spain during her junior year of college. A size 10 when the photo was taken, she says when she first saw this image she was so distressed about how fat she looked, "I almost destroyed it." Courtesty of Kara Curtis hide caption 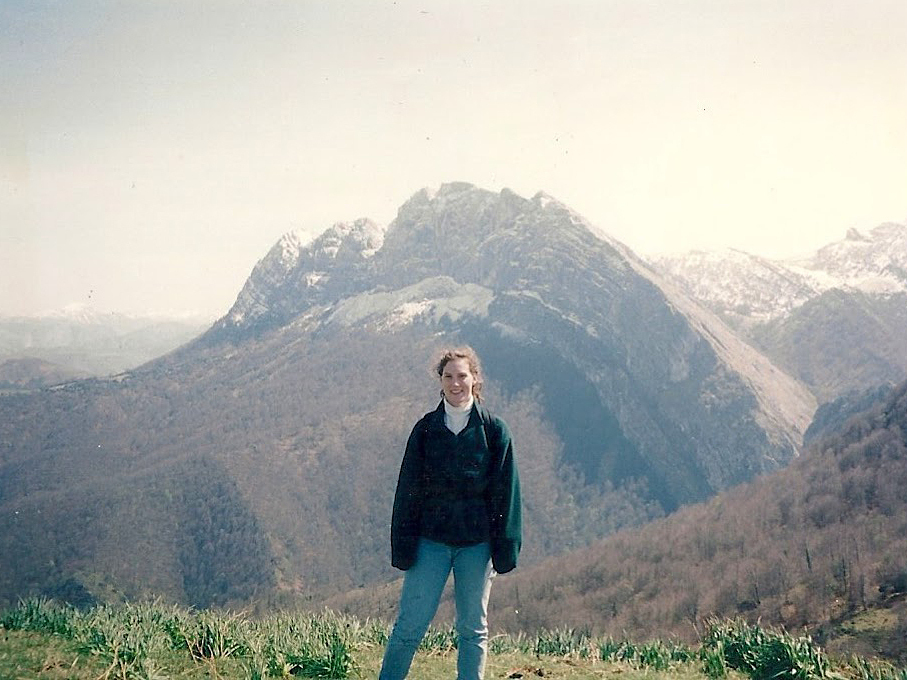 Curtis in 1994 hiking in Spain during her junior year of college. A size 10 when the photo was taken, she says when she first saw this image she was so distressed about how fat she looked, "I almost destroyed it."

One minute she's sympathetic and cutting herself slack, and one breath later, she's beating herself up.

"It's a very schizophrenic relationship we have with obesity," Curtis says. "I understand it as addiction, but then there's also this other piece of me that knows that there is a lack of willingness on my part. So really, who's to blame for that? Me!"

But another moment later, Curtis will pivot again: It can't be all her fault, she says. Those who make and serve or sell really unhealthy food also have a role to play.

Walking through her local grocery store, she points out the junk food that lies, like a trap, right inside the front door while the healthy foods section is at the far corner of the store.

"It would be really hard to walk out of here without something with sugar on it," she says. And once she starts, "I'm never going to eat just one cookie. And there are times recently where I've eaten most of a box."

The Personal As Political

What's brutal, Curtis says, is that your failure is out there for everyone to see and judge. So, for example, at the checkout, she says, "There will be that moment of being like 'Oh my gosh, I have ice cream on my conveyor belt.' Like there is that pint sitting there. And I catch someone checking me out, like I shouldn't be doing that."

It's the same kind of glares she gets on an airplane. These days, Curtis says, it's like her personal problem has become political. 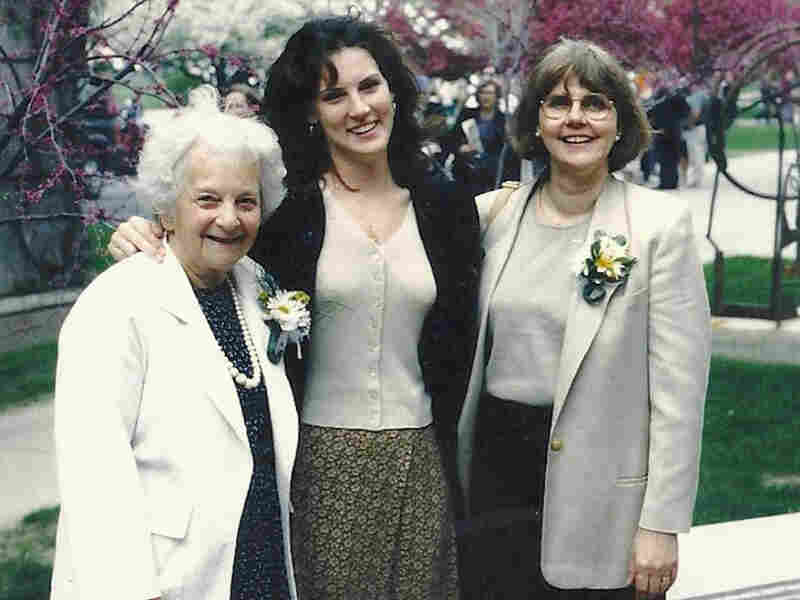 Kara with her grandmother and mother in 1995. Courtesy of Kara Curtis hide caption 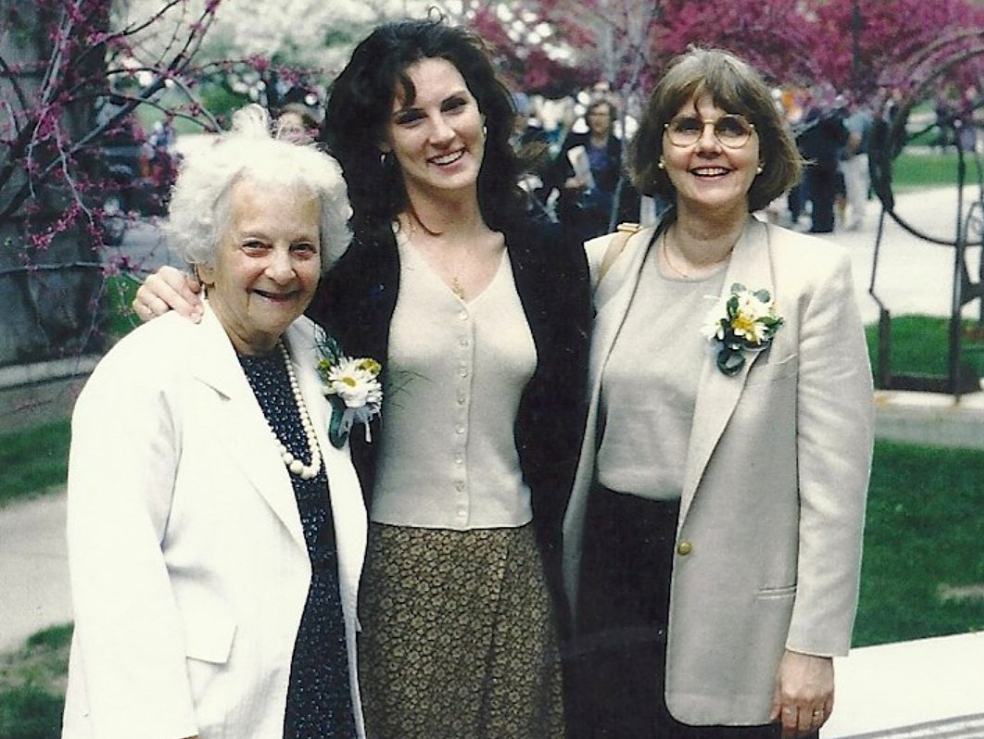 Kara with her grandmother and mother in 1995.

And that tends to be counterproductive, Curtis says. It just ends up making her feel bad — and eat more. But she's working hard to get past it. It was a huge step for example, to go on NPR and talk about being fat. It's taken a long time, but she's begun to measure progress by more than just her dress size.

"I'm really proud of myself for being honest about my situation," she says, fighting back tears. "I feel like it was gutsy to come on and say this is what I struggle with, and I want it to stop."

It's all part of a very uneasy paradox, Curtis says. She's got to accept herself and her body, even as she's desperately trying to change it.

"There were periods of time when I used to hang skinny pictures of myself up on my fridge," she says. "But that was brutal and mean. And I don't want to be brutal and mean to myself."

Curtis says she had a huge breakthrough recently, when she came out of the shower and caught a reflection of herself in the glass door.

"It was the first time that I'd seen that body and not been horrified," she says. "It was not like I don't want this to change, but it was just about standing there and seeing the entirety of my shape — and still feel loving toward it.

Curtis actually took a picture of her reflection, and she still looks at it, almost giddy with hope, that she might finally be on the way to shedding her excess weight by shedding the shame that surrounds it. But on the other hand she adds softly, "I'm also at the highest weight I've ever been, so that might be complete delusion."