Accessibility links
Weekly Standard: All Hail The House Republicans Despite its inevitable failure, Republicans passed a proposal and continue to stand their ground during budget negotiations. William Kristol of The Weekly Standard sees this GOP as worthy of honor for refusing to budge on what they think is best for the future of Americans. 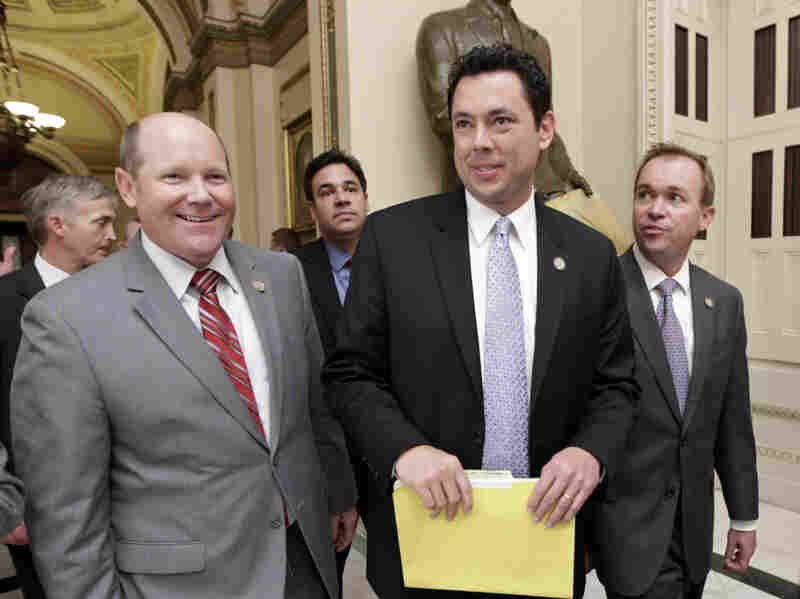 Rep. Reid Ribble, R-Wis., left, Rep. Jason Chaffetz, R-Utah, center, and other House Republicans, smile after the 234-190 passage of the conservative deficit reduction plan known as "Cut, Cap and Balance" in the GOP-controlled House, on Capitol Hill in Washington, Tuesday, July 19, 2011. Chaffetz, a member of the Budget Committee, was a sponsor of the legislation. J. Scott Applewhite/AP hide caption 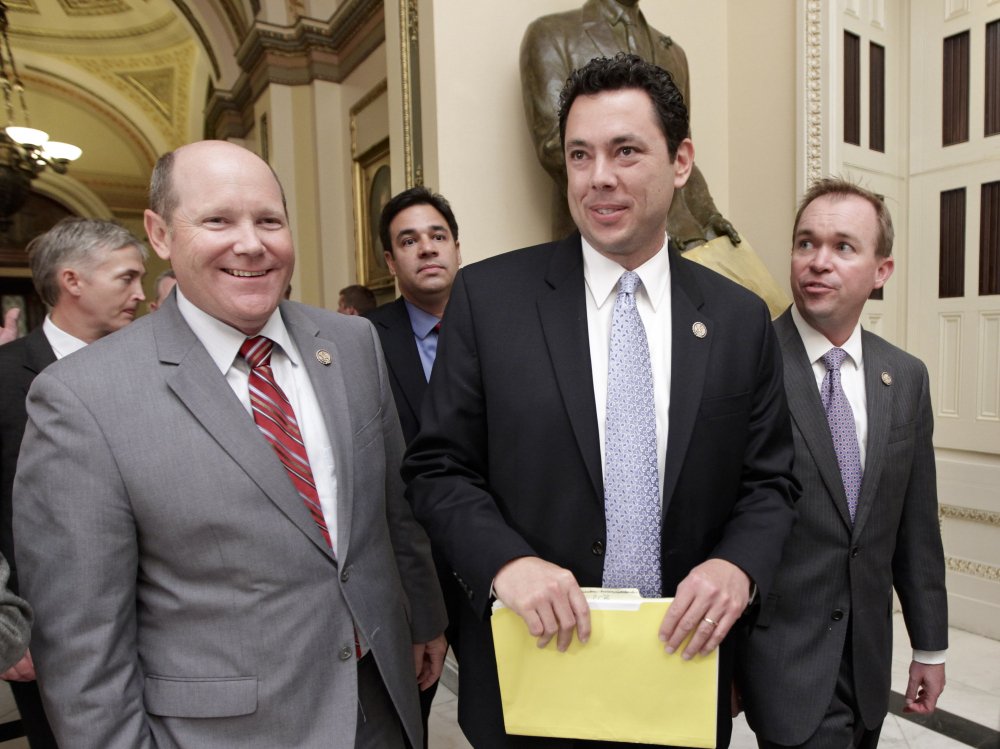 Rep. Reid Ribble, R-Wis., left, Rep. Jason Chaffetz, R-Utah, center, and other House Republicans, smile after the 234-190 passage of the conservative deficit reduction plan known as "Cut, Cap and Balance" in the GOP-controlled House, on Capitol Hill in Washington, Tuesday, July 19, 2011. Chaffetz, a member of the Budget Committee, was a sponsor of the legislation.

Read Another Opinion On The Debt Negotiations.

William Kristol is editor of The Weekly Standard, which, together with Fred Barnes and John Podhoretz, he founded in 1995.

O tempora, o mores! O Cicero, if thou couldst be with us now! The corruption of our age is approaching that of your own! Who today speaks for the ancient Roman — and modern American — virtues of civic duty and personal responsibility?

Here's who: the House Republicans.

House Republicans, on the other hand, did pass a budget earlier this year. Unfortunately, federal spending has gotten so out of control that even if the Republican budget were to become law, the federal government would have to borrow more money for several years to come. So House Republicans last week stepped up to the plate (to use a metaphor that might be unfamiliar to Cicero).

Their constituents hate the idea of voting to raise the debt ceiling. But the House GOP did what had to be done. They passed H.R. 2560, the Cut, Cap, and Balance Act of 2011. The legislation contains a debt ceiling increase and accompanies it with serious spending cuts, restraints, and the promise of a forthcoming vote on a constitutional amendment to balance the budget by capping spending. The House Republicans (and five Democrats) did their duty, in accordance with the procedures of Congress and in the light of day, proposing and passing legislation that their fellow citizens could read, debate, and judge.

And they are the only ones who've done their duty. Having failed to pass a budget for two years, Senate Democrats have done nothing to deal with the debt limit. President Obama has in effect withdrawn his February budget proposal, and hasn't submitted a new one.

So the morally bankrupt leaders of our fiscally bankrupt government meet feverishly behind closed doors, out of sight of the public they're supposed to represent, to figure out how to paper over the mess they've created. Gangs of senators occasionally emerge from their hideouts to announce deals that would raise taxes and gut defense in response to a crisis caused by domestic spending and entitlements. The gangs roam the halls of the Capitol, invading television studios in order to terrorize the citizenry with the prospect of default and mayhem. They then retreat to their lairs, while Beltway insiders shower them with praise and scorn actual legislation passed by the House in accord with the norms of democratic government.

Enough! No more gangs! No more deals! Gangster government is unworthy of a democratic republic. We elect leaders, not dealers. These elected officials are responsible for the fiscal future of the United States. They aren't negotiating with foreign enemies, when secrecy is often necessary. They aren't authorizing covert intelligence operations, which have to be planned behind closed doors. They are supposed to be accountable to the people — much as many of our elites may resent that fact.

And so: All honor to the House Republicans. They refuse to conceal their views and aims. They openly declare how fiscal solvency and budgetary probity can be restored.

Meanwhile, liberal elites (and some conservative ones) tremble at the prospect of an honest debate on how to restore sound and responsible government. So, on July 22 Senate Democrats voted, 51-46, to table the Cut, Cap, and Balance Act. No amendments were proposed or debated. No alternatives were offered. Democrats now stand before us as the party that, when faced with a deadline and a crisis, vote to . . . table.

For the next year and a half, real progress on the budget will be limited by the president and the Senate majority we have. The debt limit presumably will be increased, and the best House Republicans may be able to do is to insist on some spending cuts, prevent defense from being gutted, and keep tax burdens from rising.

Still: All honor to the House Republicans, who had the coolness, foresight, and capacity to introduce and pass legislation that is a rebuke and a stumbling block to the gangs of senators and the secret dealmakers. And to lay the groundwork for victory for the forces of limited and responsible government in 2012.