Accessibility links
A Young Mother Resists A Cycle Of Failure Not a day goes by that Lauren Ortega doesn't regret quitting high school. Now, after having two children, the 20-year-old Californian is struggling to complete her GED even as she and her boyfriend are barely able to make ends meet.

Of the million or so kids who drop out of school every year, nearly half are girls. They drop out for the same reasons boys do: they skip school, fall behind academically and they're bored. But the single biggest reason girls drop out is because they get pregnant.

Not a day goes by that Lauren Ortega doesn't regret quitting high school. When she turned 15, she got pregnant with her son. 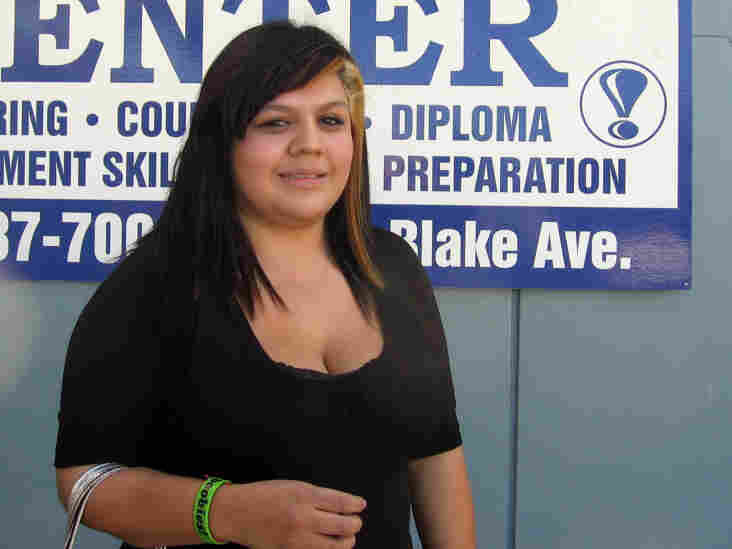 Lauren Ortega, 20, has two young kids and is struggling to finish her GED.

Her pregnancy cut short so many things, Ortega says. A job, a car, her own apartment, college, and just being independent.

Now, at 20 years old, she complains about gaining weight and feeling a little lost. She's studying to get her GED at a school for adults in San Bernardino, Calif.

Ortega remembers she was starved for affection when she met Joseph, her boyfriend. She was only 14.

She says she clung to Joseph because she was so insecure — the result of a hellish childhood.

"Well, when I was little, my mom and dad got really into drugs," she says. "My dad started to beat my mom, and we went to a women's shelter to get away from my dad. And once that started happening, my mom started doing, like, really hard drugs, to make her hallucinate and leave us."

She lost track of all the times her family had to move because her parents had squandered the rent money on drugs. Not much changed when they moved to San Bernardino. But when Ortega enrolled in high school there, it felt like a fresh start. She loved her English class, and for the first time, she says, she was doing well.

"Until I met him, my boyfriend, and then I just got involved with him," she says.

Ortega was in 9th grade, Joseph was in 10th. He told her he loved her, and they were inseparable.

"We weren't in school every day like we were supposed to. We were always at his house, or going out to eat, or the movies. My mind was focused on something else," she says.

A year later, she got pregnant with Joseph's son — a baby she didn't want, but decided to keep.

Ortega was like many young Latinas in San Bernardino, a sprawling city of 200,000. They have the highest teen pregnancy and birth rates of any racial or ethnic group.

This mirrors the national figures which show that 41 percent of Latinas drop out of school because they get pregnant.

In Ortega's case, she took off for Los Angeles and had her baby. She wanted nothing to do with her parents or with Joseph, but soon she ran out of options. She felt she had no choice but to go back to San Bernardino and move in with Joseph.

Still, she was determined to earn her high school diploma, so she enrolled in night school. That's when she got pregnant with her daughter.

Ortega dropped out of night school and realized she no longer wanted to be with Joseph.

"I left him. I broke up with him, got in my car, got my kids, was about to leave, but thought, 'I'm not going to finish anything if I leave,'" she says.

With two kids and no job skills, Lauren is totally dependent on Joseph. So for now, at home, she pretends everything is fine.

Lauren, Joseph and their children—ages 3 and 4—live in a poor neighborhood just north of downtown San Bernardino. Joseph says it's a high-crime area. That's why they have three pit bulls, all named "Peaches."

Their small two-bedroom house at the end of a dirt street was a gift from Joseph's mother before she died. But, the house is in disrepair. Joseph graduated from high school, but he doesn't have a steady job.

Privately, Lauren Ortega says her biggest fear is that if she leaves Joseph, she and her children will really have to struggle to stay out of poverty. Her fear is well-founded. Research shows that 75 percent of female dropouts go on welfare after their first child is born.

Still, she seems intent on not repeating the cycle of failure that she says cursed her family and ruined her childhood. Her children deserve better, she says.

"I read to [my son] every day. I take him to school every day. My son is like the number one kid in class right now. I am breaking the cycle," she says. "I am breaking it."

Easier said than done, she was expelled from the GED program she was about to complete, after a fight with another student. When her boyfriend intervened, he landed in jail.

She transferred to another GED program, but the job she was hoping to get, as a dispatcher with the county sheriff's office, vanished.

Lauren Ortega says she and Joseph now plan to marry.