Accessibility links
Norway Questions Its Tolerance Of Extremism Norway is starting a process of self-examination in the wake of last Friday's brutal twin attacks. In building an open and free society, there are those who believe Norwegians were too tolerant — even of those who threatened their society from within.

Norway Questions Its Tolerance Of Extremism 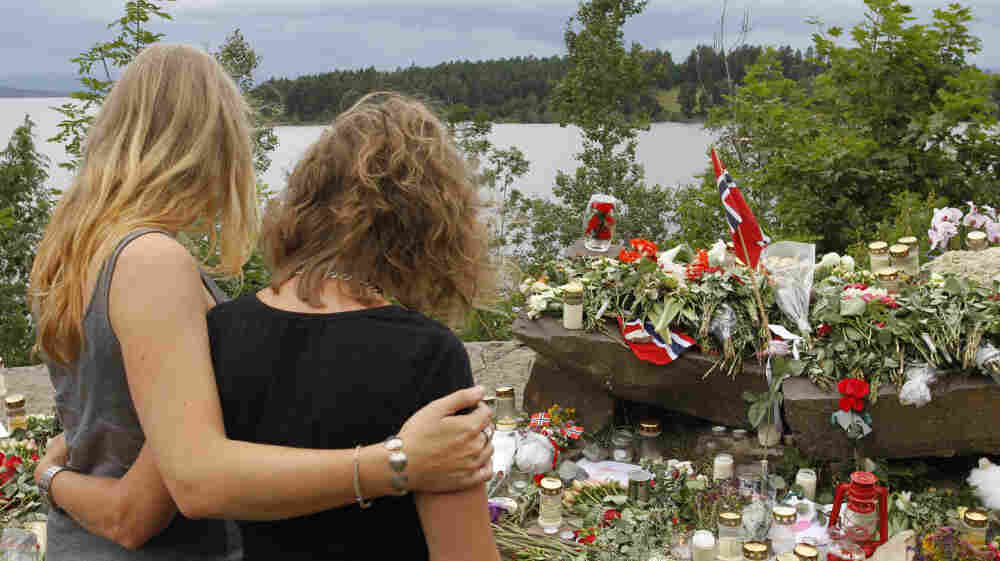 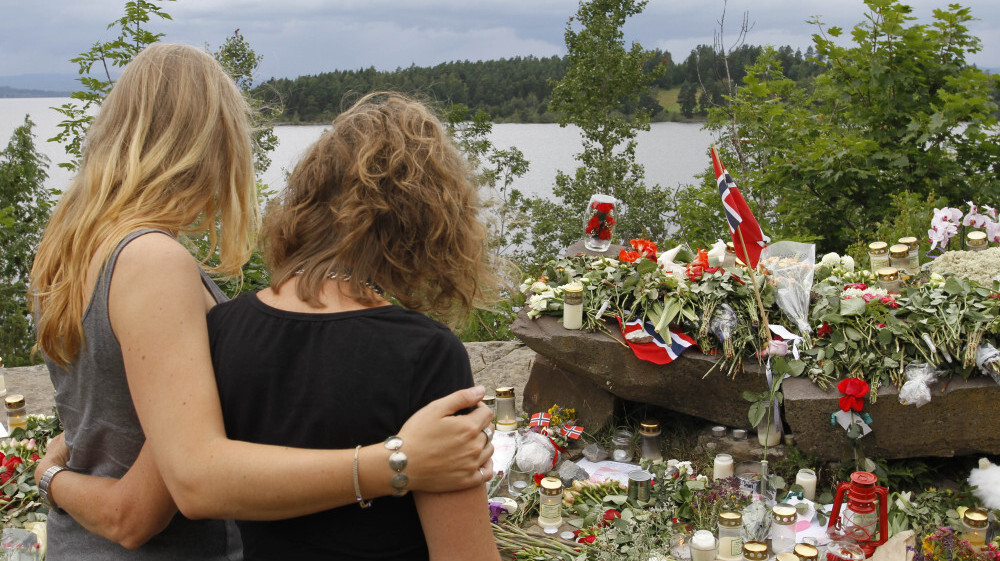 Two young women stood in silence Tuesday after placing flowers at a site off Norway's Utoya island, where a gunman killed at least 68 people.

As Norway struggles to comprehend last week's brutal twin attacks, Norwegians are starting to question whether their open and free society has been too lax in tolerating extremist views.

Hours before the bombing in central Oslo and a shooting rampage that killed at least 76 people, self-described perpetrator Anders Behring Breivik reportedly posted a video on YouTube containing anti-Muslim imagery. Set to eerie music, the video features text that rages against multiculturalism and echoes Breivik's 1,500-page manifesto calling for a Christian war to defend Europe from Islamic domination.

Breivik has been described in the media as a lone lunatic on the far-fringe of society.

But Rune Berglund Steen of the Norwegian Center Against Racism disagrees.

"Most of his ideas, his view of society is not original," Steen says. "He has bought into a certain ideology already there, including the distrust, hatred of Muslims."

Breivik, 32, once belonged to the ultra-right wing Progress Party, which has become the second largest party in Norway. Steen says the Progress Party wants much stricter controls on immigration, while Breivik is much more violent.

"What he wants is to kill the people who are not like him," Steen says.

Norway has a population of just under 5 million. Eleven percent are immigrants, and half of those are Muslim. Islam has become the country's second largest religion.

Most of [Breivik's] ideas, his view of society is not original. He has bought into a certain ideology already there, including the distrust, hatred of Muslims.

Rune Berglund Steen of the Norwegian Center Against Racism

Norway does not share the economic pain other Europeans countries are going through. It is oil-rich and has virtually no unemployment. Nevertheless, there is mounting unease over the rapidly growing number of immigrants.

Breivik claims he is part of a terrorist network with two other extremist cells in operation, and investigators are focusing on whether he acted alone or had accomplices.

It's a big challenge because right-wing extremism had been more or less ignored by Norwegian security officials.

Professor Lars Gule of Oslo University has monitored extremist websites for years, even chatting with Breivik a few years ago on one of the suspect's favorite ultra-right-wing sites.

"These websites are working as greenhouses because they tend to be isolated," Gule says. "There is no opposing voice there, so the extremist postings are the fertilizer within the greenhouse, and we should not be surprised when a terrorist flower sticks its head up."

He estimates that many thousands of people regularly visit such websites in Norway alone. Adding the rest of Scandinavia, Britain, France and Germany, Gule says, "We are talking about hundreds of thousands of people with extremist, reactionary, xenophobic and islamophobic views."

Gule says careful research is needed to determine exactly who is involved and how many there are.

By ignoring the issue for so long, he says, many of these extremist ideas have crept into everyday political debate — for example, in postings at online editions of daily newspapers.

"And the next time around," Gule says, "the editors of the paper editions will allow letters to the editors that would have been put into the wastebasket 10 years ago. Now they can be published."

Steen of the Norwegian Center Against Racism says everyone has been affected by right-wing extremism. The climate has changed so radically, he says, that even the word "racism" has been so discredited that he and his colleagues don't use it anymore.