Accessibility links
Five Stories To Watch As The TV Networks Roll Out Fall Shows For Critics It's time again to head out with the rest of the TV-heads to the Television Critics Association press tour. From Buffy's return to the weird gender politics of the fall season, we look at five stories we'll be watching over the next couple of weeks. 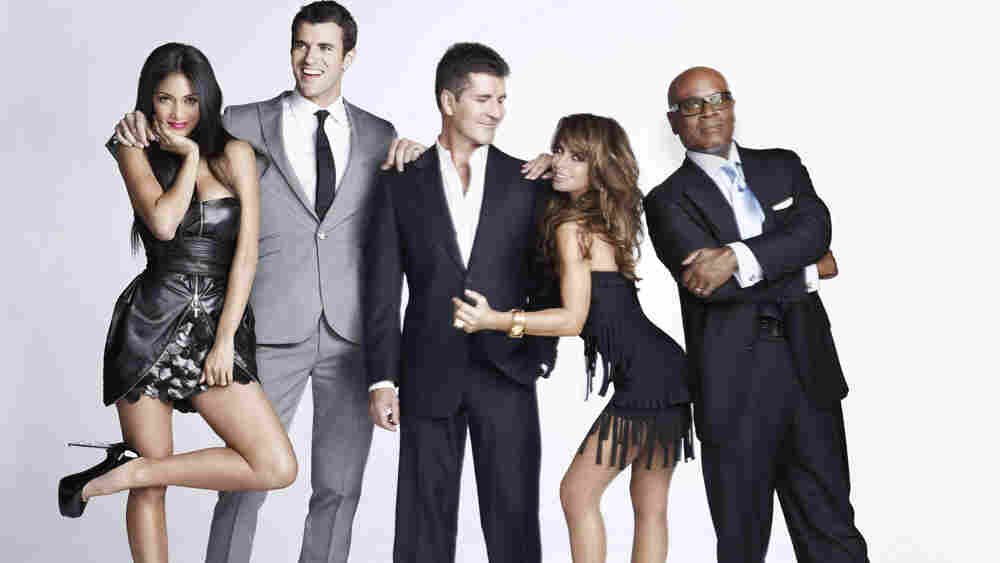 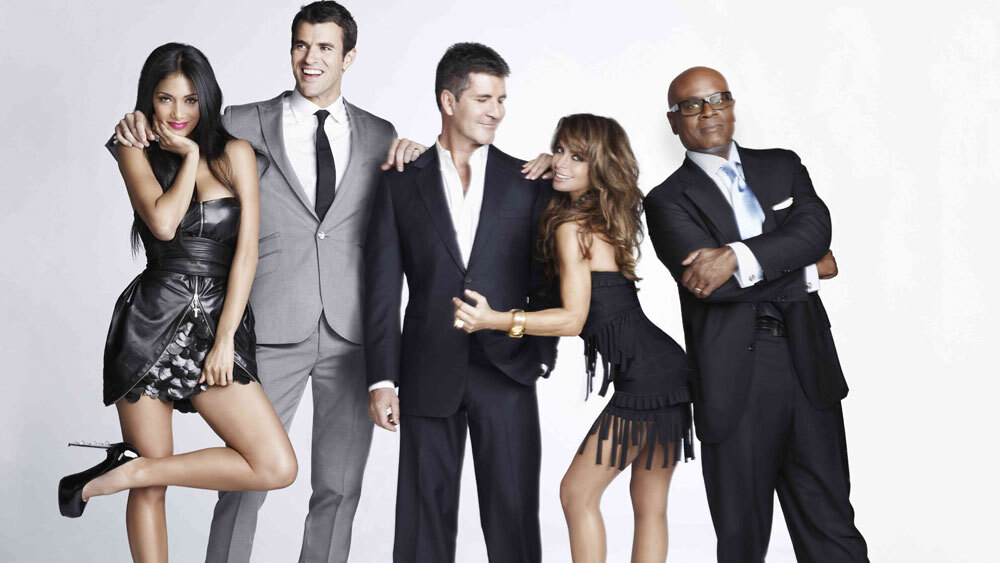 Steve Jones (second from left) and judges Nicole Scherzinger, Simon Cowell, Paula Abdul, and L.A. Reid are heading up Fox's The X Factor, which will premiere this fall.

It's that time again: I'm headed to Los Angeles for the Television Critics Association press tour. (You may hear it referenced as "TCA" by those you follow who write about television.) This is the time when critics gather for panel discussions and Q&As with everybody from big broadcast networks to cable outlets you might not even expect to care about interacting with critics at all (tomorrow's first presentation: The Weather Channel).

The networks do their best to make these panel discussions as upbeat as possible, persuading all of us that every single new show will be absolutely awesome. This happened even last year, when the great majority of the new broadcast shows that rolled out in the fall were kaput by the end of the season. (Oh, Lone Star. I still miss you. What would have happened in your third episode ever?)

But the questions can sometimes be withering — there's always an "Emperor, about your clothes" moment sometime during tour. Some of those moments are substantive and essential, like when the people behind Outsourced were asked whether it would be fair to say their show trafficked in racial stereotypes, and some of them just make you want to crawl under the table, like when Matthew Perry was asked what ever happened to David Schwimmer.

Press tour is made of moments both great and small — Patrick Stewart opining about reality television, or Oprah Winfrey taking 20 minutes to answer one question, or Louis CK wondering why Conan O'Brien wanted The Tonight Show so badly in the first place. And, of course, speaking of The Tonight Show, it's a time when big news can break: both Conan O'Brien's ouster from his spot at NBC and Simon Cowell's planned farewell to American Idol broke open at the very same press tour in January 2010.

There's nothing obvious hanging over the heads of TV journalists that's quite as potentially nutty as the Conan situation already looked when we all headed for L.A. a year and a half ago. Conan has a new show now, and everybody has kind of forgotten Jay Leno ever left his regular spot, and Simon Cowell has been gone for a whole season and Idol rolled along without him, and now he's headed for The X Factor this fall.

But there are always great stories as you go along. Maybe you buttonhole somebody you never expected to talk to at the same party where you literally bump into Shaq. Maybe you win a gazpacho ingredient guessing contest (I am still proud of that one). And maybe you actually learn something interesting about the fall season.

In that spirit, here are some of the things I have my eye on as we plunge into another tour.

The very, very gendered fall season. Particularly in comedy, it's hard to miss just how much gender politics is stamped on the fall season. Most of the new comedies are either about groupings of women or groupings of men, or they're somehow about men fitting into women's worlds or the other way around. (It was Time's James Poniewozik who noted that you can tell a show is about men because it has "men" in the title, and you can tell it's about women because it has "girls" in the title.) From ABC's Last Man Standing and Man Up to CBS's 2 Broke Girls and Fox's The New Girl, the broadcast networks are hitting hard on the theme of defining what it means to be, in particular, a single woman or a married man.

Speaking of Simon Cowell... The fact that Cowell's departure didn't hobble Idol terribly in its first season, the addition of his obviously similar The X Factor, particularly in light of the success of NBC's The Voice (which seems to have caught almost everyone off-guard to at least some degree) cannot be an entirely comfortable development for those who are in charge of Fox's traditional spring juggernaut. The idea, of course, is that both Idol and X Factor can succeed, one in each half of the year. But while Idol got good marks for its new judges this year, there still may be blood in the water and a sense that three singing competitions is ... a lot. The Voice has momentum and freshness, and The X Factor reunites Simon Cowell and Paula Abdul. Where does that leave Idol?

Buffy returns. Okay, okay, it's not Buffy. It's Sarah Michelle Gellar, returning to television this fall in the CW's Ringer. This is massive, earth-shaking news for a lot of people who were part of the WB's original youth-oriented rise. (It's interesting to note that this season also brings James Van Der Beek — Dawson himself — back to series TV on ABC's Apartment 23, where he plays a version of himself.) Keep in mind: Buffy was a pop show, but it was also a critically adored show, and a good number of folks who are TV writers in 2011 count it among the fandoms they've been part of at one time or another. Whether she'll be able to get a word in edgewise that's actually about the new show remains to be seen.

Looking for the new prestige cable drama. There aren't quite as many obvious candidates for Next Emmy Hog as there have been when we first saw Treme or Boardwalk Empire presented. But AMC is rolling out Hell On Wheels, a drama about the building of railroads after the Civil War, starring Anson Mount and Common. BBC America is in the hunt with The Hour, starring Dominic West (that's McNulty from The Wire to you) and Ben Whishaw, who's starred in films including Bright Star and Brideshead Revisited. Or maybe you want to bet on Showtime's Homeland, starring Claire Danes.

Downton Abbey. That's right, people. It's coming back to PBS in January 2012, and PBS is bringing a panel of the cast to press tour. (And no, this doesn't mean I get to see it yet.) But this soapy darling of those who like romance and intrigue and very good acting is sure to get some solid buzz going, and rightly so. PBS has other stuff on the docket as well, including Ken Burns' new epic, Prohibition, and an ambitious project called the PBS Arts Fall Festival that will include rock, ballet, and Steve Martin narrating a documentary about American music.

You can always count on press tour to be a mix of spontaneous storytelling, analysis of new trends, and stuff that's just plain weird — like the time everyone got completely distracted from the panel discussion about Fox's sadly short-lived The Good Guys by the appearance of Bradley Whitford's mustache. (Oh, and sometimes I lose my mind.) I'm going to try to bring you just as much spiffy coverage as I possibly can, so fasten your ... couch-belts.