Accessibility links
U.S. Looks For Ways To Break Libya Stalemate Four months after NATO airstrikes began, an unyielding Moammar Gadhafi is still facing off against the opposition. The Obama administration is looking for ways to tip the scales. One U.S. official is pushing for using clandestine action to target Gadhafi. 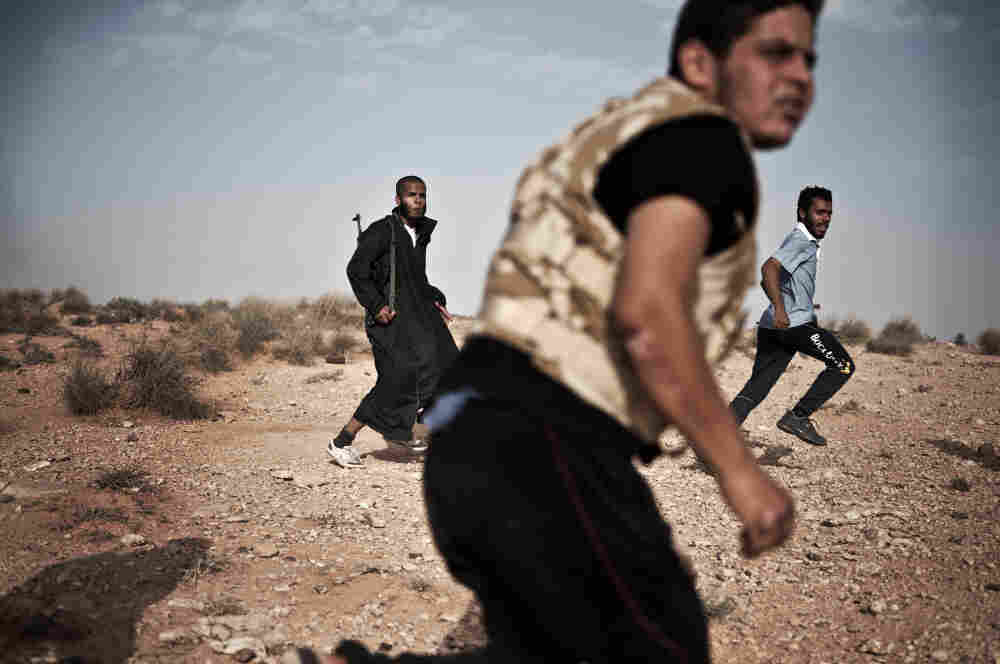 Libyan rebel fighters run for cover at the front line near the southwest desert town of Gualish on July 24, as Gadhafi forces started attacking them in an attempt to capture the city. Colin Summers/AFP/Getty Images hide caption 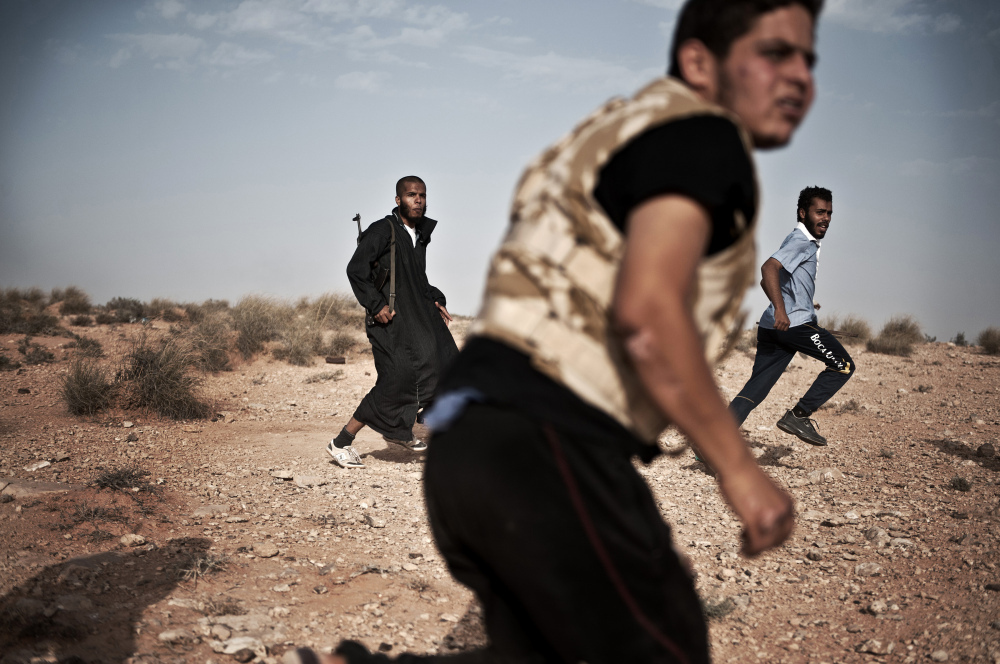 Libyan rebel fighters run for cover at the front line near the southwest desert town of Gualish on July 24, as Gadhafi forces started attacking them in an attempt to capture the city.

It's been more than four months since NATO launched an attack on Moammar Gadhafi's forces in Libya. Since then, opposition forces have gained ground with help from NATO airstrikes, but Gadhafi's military is holding firm so far.

President Obama and other leaders have called on Gadhafi to leave, but he's clearly not listening. Now, the conflict in Libya has turned into a complicated waiting game.

The goal of the U.S. and NATO-launched attacks has been to prevent Gadhafi's forces from waging war on the Libyan people by destroying his weapons, equipment, and military command and control centers. And if Gadhafi himself happened to be caught up in one of these airstrikes, so be it.

But after four months, some on Capitol Hill are starting to lose patience.

"I mean, he is hanging on, and I've often said that the sooner he is removed, [the] quicker this gets resolved," says Republican Rep. Mike Rogers, chairman of the House Intelligence Committee.

"Harsh words, I know," Rogers says, "but the longer this stalemate goes, then you have people selling weapons caches for cash. You have chemical stockpiles that look pretty tempting. There's a lot of buyers on the black market for that stuff."

Anthony Cordesman, with the Center for Strategic and International Studies, says the clock has been working against NATO forces.

"When you let something fester this long and you have an extremely weak rebel force, Gadhafi's forces have time to adapt," Cordesman says. "They use different weapons; they become far less visible targets; they start relying on land mines; they have more time in which to try to divide the people and intimidate."

There's a standoff with NATO and the rebel force on one side, and an unyielding Gadhafi on the other. The Obama administration is looking for ways to tip the scales.

One U.S. official is pushing for the U.S. to use clandestine action to target Gadhafi. The CIA has operatives on the ground in Libya, but so far U.S. officials familiar with the intelligence operation say their role is limited to gathering intelligence about Gadhafi's forces.

Those same U.S. officials say morale within the regime's military is slipping. There's been a steady stream of defections of officers and troops.

Rogers says those defections haven't been enough to push Gadhafi out.

"He is still firmly in charge and firmly in control of the military apparatus — [so] the rebels are having a hard time engaging," Rogers says.

Nobody has enough momentum to stop this from becoming what it already is: an agonizing, drawn-out process doing immense economic damage to the Libyan people, in which no one can be certain of the outcome.

Anthony Cordesman, with the Center for Strategic and International Studies

Damage To The Libyan People

The other way to break the stalemate is to give the rebels the weapons they need to win decisively, but that's controversial. According to one U.S. official, opposition leaders have asked the U.S. for tanks, artillery and heavy machine guns. So far, the U.S. has said no.

Still, even without that help, the Libyan rebels have kept up the fight.

According to one U.S. official, the rebels struck a key blow to Gadhafi a couple of weeks ago when they severed a major fuel pipeline that feeds a regime refinery in Zawiya, about 30 miles outside Tripoli.

That's a big part of the NATO strategy: Bleed Gadhafi of money and resources until he surrenders. The problem is that the Libyan people — the same people NATO is trying to protect — suffer too. There are food shortages in Tripoli, and long lines for fuel.

The CIA estimates that before the current crisis, a third of the Libyan population was living at the poverty level. Cordesman says the past few months have made things even worse.

"Nobody has enough momentum to stop this from becoming what it already is: an agonizing, drawn-out process doing immense economic damage to the Libyan people, in which no one can be certain of the outcome," he says.

In other words, the NATO operation meant to prevent one kind of humanitarian crisis may be contributing to another.