Accessibility links
Avanti! Author Finds Italy Between 'Love And War' When author Simon Mawer wants a piece of Italy that millions of visitors to the country never dream exists, he opens up Eric Newby's novel. Filled with grit and passion so evocative you can smell the air, the story is almost as good as a plane ticket. 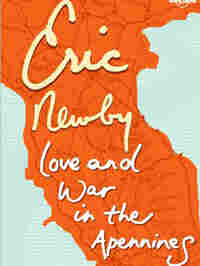 Simon Mawer is the author of eight novels, including The Glass Room, which was on the short list for the Man Booker Prize 2009. He is currently at work on a new novel, tentatively titled Trapeze.

Italy, love and war are a powerful combination. But any idea that Love and War in the Apennines is a romantic story of bella Italia can be thrown on the dung heap. We are not in sunny Tuscany or colorful Naples. There are no works of art here, no medieval churches or Renaissance frescoes, no palaces and pretty piazzas. Instead we are in the mountains that form the spine of the peninsula. The Apennines. Life is hard and pitiless, the people live in stone hovels and tourists never come.

It was to this almost medieval world that author Eric Newby came in 1943. He was a young British Army officer on the run from a POW camp. The Allies were fighting hundreds of miles to the south and the Germans were all around and hunting him. The only possible refuge was in those mountains.

I know them well. In the darkness of a winter evening I once knocked on a door in a remote mountain village more or less as Newby did. It wasn't wartime and I wasn't on the run; rather I was searching for a group of students who had gotten lost while hiking. But my experience brought his to mind: "Avanti!" a voice called at my knock. I opened the door. Before I could utter a word about myself or my mission — literally before I could open my mouth — I was ordered to sit down at the table and offered wine and food. They took me in without question, just as, a generation earlier, such people took in Eric Newby. But for him they were risking their lives.

Newby recounts his real-life adventure with characteristic British understatement and self-deprecation, but also with poetry and a wonderfully evocative sense of place. Read the book and you are there in the Italian mountains with him: You can feel the stony soil, smell the wood smoke in the air, sense the snow on the wind. He conjures up the stubborn, fatalistic, bloody-minded locals who risked their lives for him so vividly that they seem to be standing in front of you. You share his fears and his hopes. He makes you laugh and he makes you weep. It's quite an achievement for an author commonly labeled as a travel writer.

But it's Love and War in the Apennines. So where does the "love" come in? Well, right at beginning, when the author meets the daughter of a local schoolmaster. She tries to teach him some Italian; he tries to teach her English. Later, with the help of her father and the local doctor, it is she who gets him safely to the mountains. Not surprisingly — after all, she is putting her life on the line to help him — he falls in love with her.

So what happens to them both, and indeed to all the characters in this rich and thrilling story? To discover that you must read the book. Along the way you'll also learn about a part of Italy and a way of life that the millions of visitors to the country never dream exists. It is an Italy that I love. And in Love and War in the Apennines you'll also find out that the course of true love sometimes does run smoothly.

You Must Read This is edited and produced by Ellen Silva