Accessibility links
No-Show Students Drop Out Despite Interventions Danny Lamont Jones (right) raised lots of red flags not long after he enrolled as an eighth-grader in a Baltimore school. He was quiet, struggling academically, and he didn't show up very often. It's unclear whether efforts to keep the 16-year-old in school will succeed. 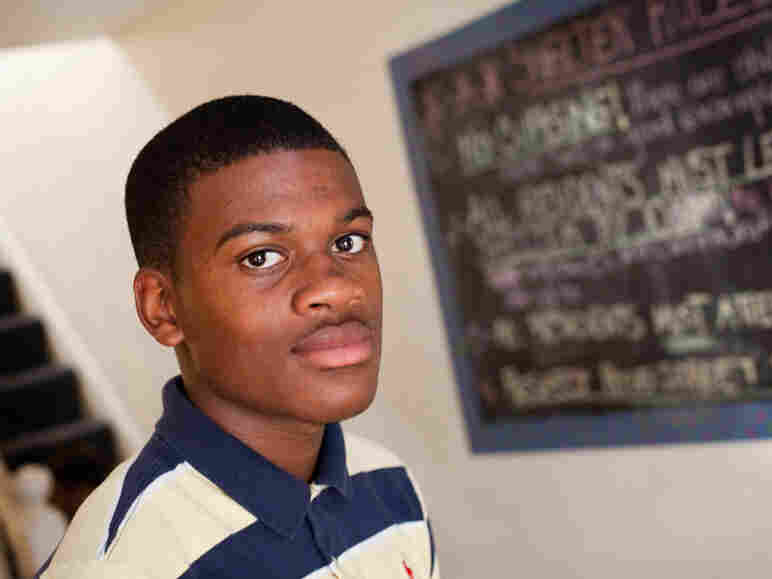 Danny Lamont Jones, 16, doesn't live at the Rose Street Youth Shelter anymore, but he spends a lot of his time there. Chris Hartlove hide caption

Fourth of a five-part series

In Baltimore, the vast majority of kids who never finish school drop out because of extreme poverty, homelessness and a drug epidemic that has left some neighborhoods desolate and dangerous.

In the toughest neighborhoods, kids miss lots of school days, and that puts them at risk of dropping out. Now, Baltimore's efforts are driven toward reaching these children early.

When Danny Lamont Jones showed up at Tench Tilghman Middle School in East Baltimore, he was living only a few blocks away in a homeless shelter.

"I think I was 12 when I first came here," Danny says. "Living in a shelter, like, with people I don't know — everything was, like, going downhill, and I didn't know what to do."

Danny had missed the entire sixth grade and most of seventh. He barely knew how to read.

"I was lost, 'cause I had been out of school for so long. You know, I was young and had a crazy mind," he says. 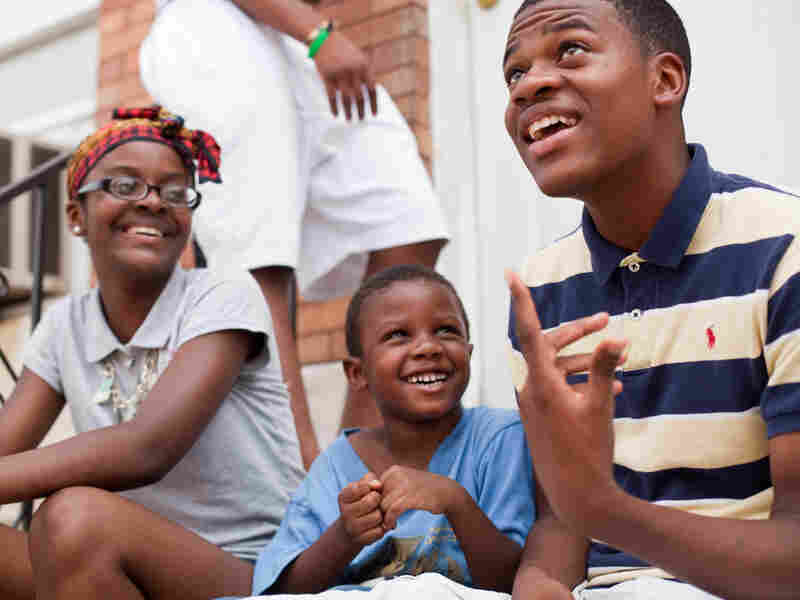 Jones (right) was 12 when he arrived at the shelter. Though he was enrolled at Tench Tilghman Middle School in East Baltimore, he had already missed the entire sixth grade and most of seventh. Chris Hartlove hide caption

That craziness, he says, was due in part to his mother.

Bernice Jones, 56, has 14 children, 38 grandchildren and one great-grandchild. Jobless, with a 10th-grade education, she's an alcoholic and suffers from debilitating anxiety attacks.

"I got myself in a situation, I couldn't handle too much of anything," she says. "I didn't know what to do. I put the kids here, there, and now my son is doing good."

Danny, now 16, says things aren't really OK. His 13 brothers and sisters are scattered. Two are in jail, some live with relatives. The oldest are on their own and rarely have contact with Danny. His father is out of the picture.

"Last time I talked to him, he told me [to] forget he was my father. And it hurt me. I kind of miss him, but I don't like him at all," Danny says.

Growing up, Danny says he felt like he was all alone. Local organizations estimate there are about 1,300 children like Danny in Baltimore. They're on their own, sometimes homeless, fatherless or with a sick, troubled parent. Most of these kids are in and out of school.

School's Out: An Overview Of America's Dropout Crisis

"We know Danny," Tench Tilghman Middle School Principal Jael Yon says. "We've been to that shelter where Danny was, and it's the relationship with that shelter that's keeping Danny alive and out of gangs."

She says Danny raised lots of red flags not long after he enrolled as an eighth-grader at her school. He was quiet, struggling academically, and he didn't show up very often. Yon says if a child misses anywhere from 20 to 50 days of school a year, chances are that child is going to drop out.

"In communities like East Baltimore, every child in your class is at risk. You don't know what they have to go through to come to school every day. You have to keep encouraging them and checking on them, and that's the toughest thing for some of our kids, like Danny," she says.

These children face huge obstacles, says James Comer of Yale University. Comer is a leading expert on child development and high-poverty schools like those in East Baltimore.

Baltimore, for example, has adopted a zero-tolerance policy in dealing with kids who miss school. Yon says the district can fine parents $50 or put them in jail if their kids miss 20 or more days of school.

"That may be a last resort, to really send that message home. It is illegal to keep your child out of school," she says.

The school district cited more than 400 parents this school year. The district's key strategy, though, has been placing teams of psychologists and counselors in schools like Tench Tilghman to identify the kids who are most at risk of dropping out.

Baltimore has gotten high marks and lots of news coverage for reducing both the dropout rate and truancy rate by half in just three years. But if you count the number of kids who start ninth grade every year, and the number who graduate four years later, the city's dropout rate is still pretty high: at least 45 percent, by some estimates.

That hasn't done much for Baltimore's collective angst about kids like Danny.

"In my head, I think I have to prove a point that I'm not scared anymore," Danny says.

These days, he says he doesn't feel so alone. His mom has cut back on her drinking, and she's found an apartment she can afford. So, Danny has moved in with her and out of the shelter on Rose Street.

Danny is supposed to start 10th grade next fall, but he says he doesn't know if he'll stay and get his diploma.

"I don't want to be an oddball or different or nothing, but I just don't know," he says.

For all their efforts, no one who's intervened in this teen's life — not his principal, his teachers or the people at the shelter who took him off the streets — no one can say with any degree of confidence that Danny is going to make it.