Accessibility links
Foreign Policy: Murder By Starvation Civilization has defeated mass starvation. So why are so many Somalis dying of hunger? Charles Kenny of Foreign Policy argues that hunger is not an act of God but controlled murder on a massive scale. 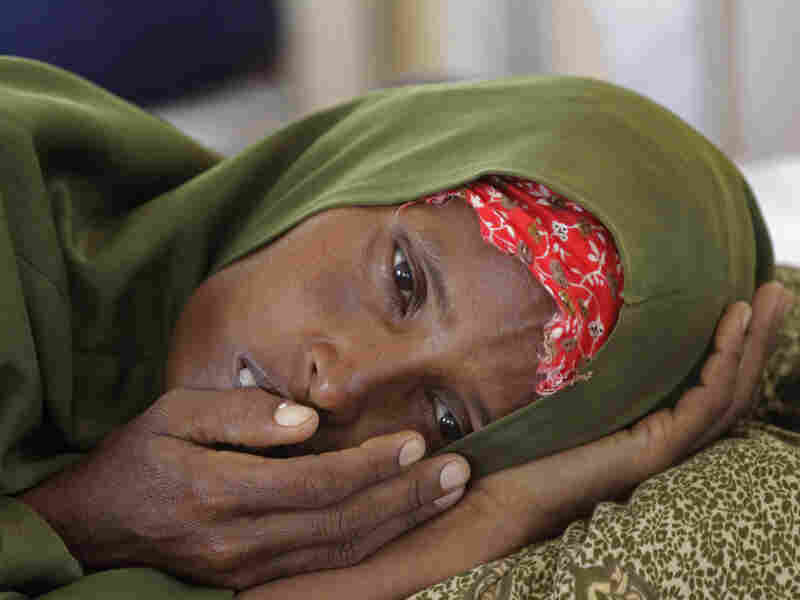 A malnourished woman lies in a field hospital of the International Rescue Committee, IRC, in the town of Dadaab, Kenya, Tuesday, July 26, 2011. The U.N. will airlift emergency rations this week to parts of drought-ravaged Somalia that militants banned it from more than two years ago, in a crisis intervention to keep hungry refugees from dying along what an official calls the "roads of death." Schalk van Zuydam/AP hide caption 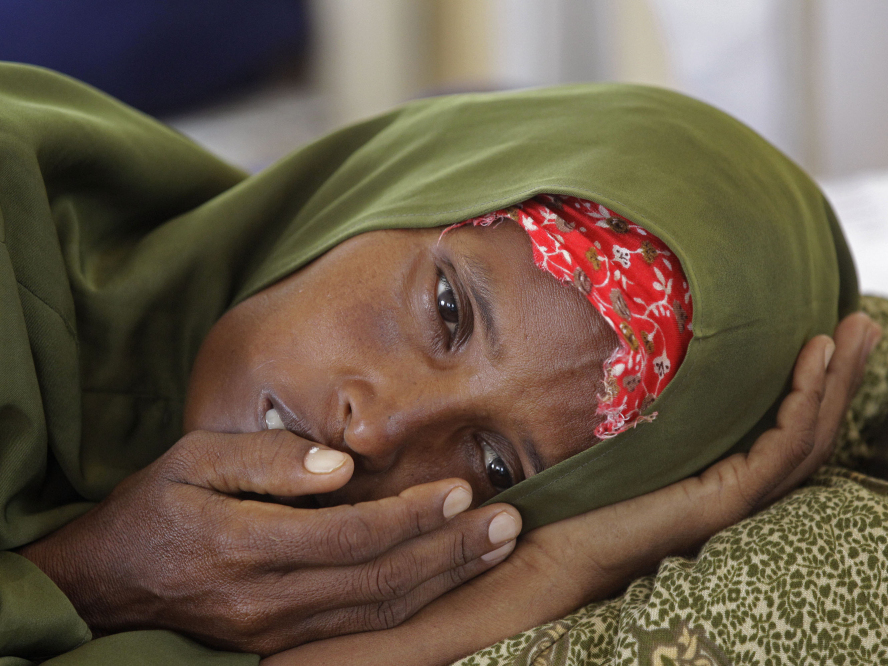 A malnourished woman lies in a field hospital of the International Rescue Committee, IRC, in the town of Dadaab, Kenya, Tuesday, July 26, 2011. The U.N. will airlift emergency rations this week to parts of drought-ravaged Somalia that militants banned it from more than two years ago, in a crisis intervention to keep hungry refugees from dying along what an official calls the "roads of death."

Deprived of food long enough, the bodies of starving people break down muscle tissue to keep vital organs functioning. Diarrhea and skin rashes are common, as are fungal and other infections. As the stomach wastes away, the perception of hunger is reduced and lethargy sets in. Movement becomes immensely painful. Often it is dehydration that finally causes death, because the perception of thirst and a starving person's ability to get water are both radically diminished.

Thousands of Somalis have already suffered this tragic end, and it is likely to kill tens of thousands more in the coming months. The famine now starving Somalia affects 3.7 million people, according to the U.N. World Food Program. The U.S. Agency for International Development's Edward Carr, who works on famine response, estimates that on current trends Somalia's south could see 2,500 deaths a day by August.

For all its horror, starvation is also one of the simpler forms of mortality to prevent — it just takes food. Drought, poor roads, poverty — all are contributing factors to the risk of famine, but sustenance in the hands of the hungry is a pretty foolproof solution. As a result, famine deaths in the modern world are almost always the result of deliberate acts on the part of governing authorities. That is why widespread starvation is a crime against humanity and the leaders who abet it should be tried at the International Criminal Court (ICC).

Historically, famines were sometimes the simple result of collapsed local food production, limited resources, and weak infrastructure to bring in food. But as infrastructure and markets have spread, the failure of local crops has become a contributing factor rather than a sufficient cause of widespread death by starvation. For example, economists Robin Burgess and Dave Donaldson have found that peacetime famine in India ended at the same time (1919) as railroad networks finally reached every corner of the subcontinent.

Infrastructure is still a barrier to famine response in many parts of the world — studies of modern famine suggest being near a main road significantly increases the chance of survival. But roads and rail are far more widespread worldwide than they were 50 years ago, and a global famine relief industry now has significant capacity to provide food to those in need even in remote areas of the world. Humanitarian aid financed by the major donors climbed from a little over $1 billion in 1990 to $9 billion by 2008 — a size and capacity which, even with the aid industry's well-documented faults, is enough to ensure the ability to stop mass death by starvation wherever it is allowed to operate.

Thanks to globalization, the spread of infrastructure, and the growing capacity of agencies like the World Food Program, famines have become very rare over the last 30 years. Somalia's is the first official famine declared by the U.N. worldwide since 1984. Because declaring a famine is usually the responsibility of the government (a requirement waived by the U.N. in the case of Somalia), the official count is far from exhaustive: North Korea saw somewhere between 600,000 and 1 million people die from famine in the second half of the 1990s, and Omar al-Bashir's Sudan and Robert Mugabe's Zimbabwe have seen outbreaks as well. But, in general, starvation is on the wane. According to Bill Easterly of New York University, less than three tenths of a percent of the population of Africa was affected by famine in the average year between 1990 and 2005.

So why do famines still happen at all? As the economist Amartya Sen famously observed, famines rarely occur in democratic or even relatively free societies. In fact, they don't happen any more in any country where leaders show the slightest interest in the wellbeing of their citizenry. Thanks to spreading markets and improved international assistance, famine is no longer associated merely with passive or excessively weak governance. In order to ensure widespread death by starvation, a governing authority must make a conscious decision: it must actively exercise the power to take food from producers who need it or deny food assistance to victims.

Consider China's Great Famine of 1959. If you want to give Chairman Mao the benefit of the doubt, you could argue that the disaster was the result of gross negligence and an ideology that put little value on an individual life rather than a deliberate and direct attempt to murder millions. But in any case, the disaster was Mao's doing. Economists Xin Meng, Nancy Qian and Pierre Yared have found that regions of China with higher per capita food production in the year of the famine suffered higher mortality rates — which means that central planners were taking far too much food from places where it was needed. Similarly, the 1984 Ethiopian famine that prompted the launch of Live Aid involved a drought, but was exacerbated by government policies of enforced collectivization, grain confiscation, and taxation. And the provinces of Wollo, Tigray, and now-independent Eritrea, where the famine was centered, were also home to separatist movements — they were victims of an intentional policy of using famine as a weapon of war.

Somalia is shaping up to be yet another case study of mass starvation as an intentional act of governance. It is true that the country is burdened with an official government whose remit extends only a short distance from the capital, a long-running drought, poverty, limited local supplies of food, and logistical factors that complicate imports from elsewhere, not least the near-total destruction of the country's infrastructure by 20-odd years of civil war. And as a result, local cereal prices are more than 2 to 3 times what they were in 2010 in some areas. Ed Carr of USAID noted this month that there are "no real jobs to earn money to buy imported food, and the livestock are dying, meaning livestock owners cannot sell them off for food." But Carr also hints at another problem: "we cannot get in to these areas with our aid." That is why, despite similar drought conditions in parts of neighboring Ethiopia and Kenya "famine stops at the Somali border."

To be more geographically specific, famine is concentrated in areas of the country under the control of al Qaeda affiliate al-Shabab, which is refusing to let in relief convoys. In a reversal from statements earlier in the month that suggested some aid agencies would be allowed to respond to the drought, a spokesman for al-Shabab has declared that reports of famine are "sheer propaganda" and banned ad groups that it claims are "purely political." Even were al-Shabab officials to re-authorize large-scale NGO operations (and the Red Cross does appear to have some access in this regard), agencies would be understandably skittish about venturing back to a region where 42 aid workers were killed in 2008 and 2009. Those with longer memories will recall that the U.S. intervention in Somalia under President George H.W. Bush that ended with Blackhawk Down began as a food aid mission. One wonders what the response of a gun-touting teen would be to the appearance of a Toyota Land Cruiser with U.N. insignia, which he has been told is the steed of the devil. (And one wonders what will be the reaction of donors when, in six months time, some of the Land Cruisers they donated reappear, topped with machine guns firing at U.N. troops in Mogadishu.)

If widespread famine now only occurs after the deliberate acts of leadership create the conditions for starvation, what should be the international response? In a 2003 article in the American Journal of International Law, lawyer David Marcus argued that famine could constitute a crime against humanity. European Parliamentarians have set a precedent by recognizing the Ukrainian famine of 1932 — in which Stalin's government forced grain removals and forbade movement in a way that guaranteed widespread starvation — as such. And most famines of the more recent past fit that description very well. That suggests it should become standard practice for the ICC to issue warrants for the arrest of leaders of regions or countries where mass starvation occurs.

Of course, because in the modern world local food shortages only cause widespread famine in places under the leadership of the criminal or insane, aid agencies trying to help will necessarily find themselves in the moral quagmire of negotiating access with the very people who are abetting the crisis in the first place. And that complicates the international response to famine crimes. Take the related case of Bashir's Sudan: In 2009, the ICC issued an arrest warrant for him based on evidence of crimes against humanity committed in Darfur. At the time, some commentators warned that the warrant would make negotiating with Bashir over access for humanitarian relief in the region all the more complex.

But in the case of al-Shabab such concerns appear less pressing. As the group is widely recognized as a terror organization, with its high-ranking officers already targets of U.S. drone strikes, it hardly seems likely that the international community has much to lose here. So now would be as good a time as any to set a precedent with a U.N. Security Council referral of al-Shabab's leadership to the ICC, on the grounds of crimes against humanity by method of mass starvation. That would make clear the international community fully understands that famine is not an act of God, but an act of mass murder.