Accessibility links
A Novel So Graphic You Can't Look Away ... For Kids Can a graphic novel written for children, about children be worthy of the time and critique of an intellectual writer? Though he keeps it a bit of a secret, author Darin Strauss believes the Amulet series is so thrilling, you won't be able to put it down.

A Novel So Graphic You Can't Look Away ... For Kids

A Novel So Graphic You Can't Look Away ... For Kids 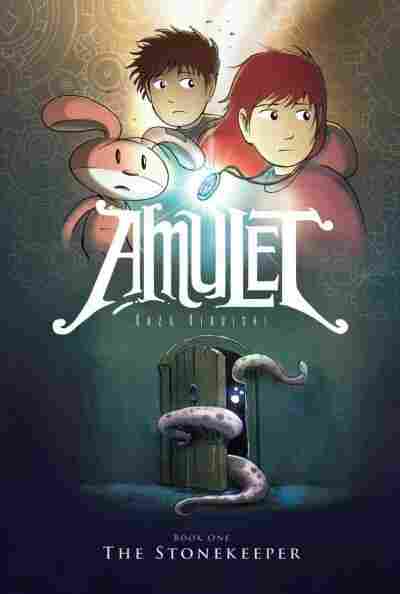 As a book snob, I've fought and lost a lot of rear-guard actions lately.

It was one thing when academics and hipsters (a horn-rimmed multitude) started wrinkling their brows over comic book artists like Daniel Clowes and Art Spiegelman. I was down with that, however reluctantly. Only a bitter-ender could deny that some comic book writers have had a big enough cultural impact — and have come up with resonant enough stuff — to merit a real scholarly look-see.

But in a tiny inner voice, I always told myself real books were not just better, but much more up my particular alley. I'd put away childish things. So how do I explain my guilty pleasure, the graphic novel series Amulet, by Kazu Kibuishi?

Amulet is a derivative schmaltz-fest: obvious, goofy, and a breath-quickening thrill read. My brain kept registering objections while some hysterical page-turning left me with a full-blown case of reader's wrist.

The books' hero is Emily, who inherits a magic amulet and is transported (with her brother, via her basement) to a world called Alledia, where an Elf King is raring to kill her. But one of the things that makes Amulet a delight — it's actually set to be a movie starring a pair of cute, young Pinkett-Smiths — is its shamelessness.

It's made of fun bits from movies and books we've already enjoyed: a mash-up. The titular amulet that Emily wears is an all-powerful but dangerous talisman (that's a Lord of the Rings rip); and Emily is thought to be "The One" — the foretold savior whom a rebel army has been waiting for (like The Matrix). The amulet itself tempts Emily to disregard the "Life Force," the better to channel its own dark power (a la Star Wars), while a bounty hunter chases good guys around a city in the clouds (that's Empire Strikes Back) and a mysterious character trains Emily in venerable warrior ways ...

Kibuishi, the author, is a borrower but also a genuine talent — the dialogue is witty, quick and authoritative, the drawings cleanly handsome, and the action goes well over the legal speed limit. And Kibuishi has added to the mix some idiosyncratic and just plain cool story touches: One of Emily's robot companions, Morrie, shows his anxiety in senseless chatter and forehead sweat; Emily's favorite protector is pink and looks huggably like a bunny doll. My favorite: The family house doubles as a conveyance they can drive from a Captain Kirk-ish chair — making it a kind of Starship Enterprise with feet. Or is it more like a Transformer?

And such questions are the point: A shrewd writer like Kibuishi benefits from coming late to the tradition. Most everything in Amulet has in a way been fan-tested before Kibuishi began writing. 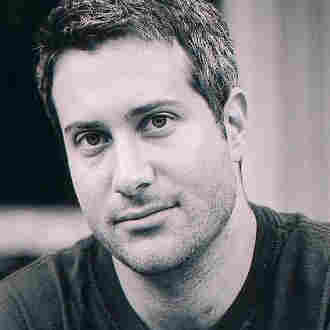 Darin Strauss is the author of The Real McCoy and Half a Life. He is a clinical associate professor of writing at New York University. Robert Birnbaum hide caption

Reading it — or, as the writer and Amulet fan David Lipsky says, "watching" it — is to be taken in and coughed up a few hours later at the last panel.

As for the "guilt" in this guilty pleasure: It's probably just me. Judging by some informal subway observation, there's scarcely a middle-aged guy left who feels self-conscious publicly reading a comic book. Kibuishi's skill has run my literary elitism into the sand. Maybe it's time to pick up childish things.

My Guilty Pleasure is edited and produced by Ellen Silva with production assistance from Rose Friedman and Lacey Mason.