Accessibility links
C.J. Chivers - 'Reporting On The Front Lines In Libya' New York Times reporter C.J. Chivers details what he's witnessed in Libya, where he has covered the battle between Moammar Gadhafi's forces and the opposition. Chivers has traveled with the rebels through dangerous territory and is trying to tell the true story of the war. 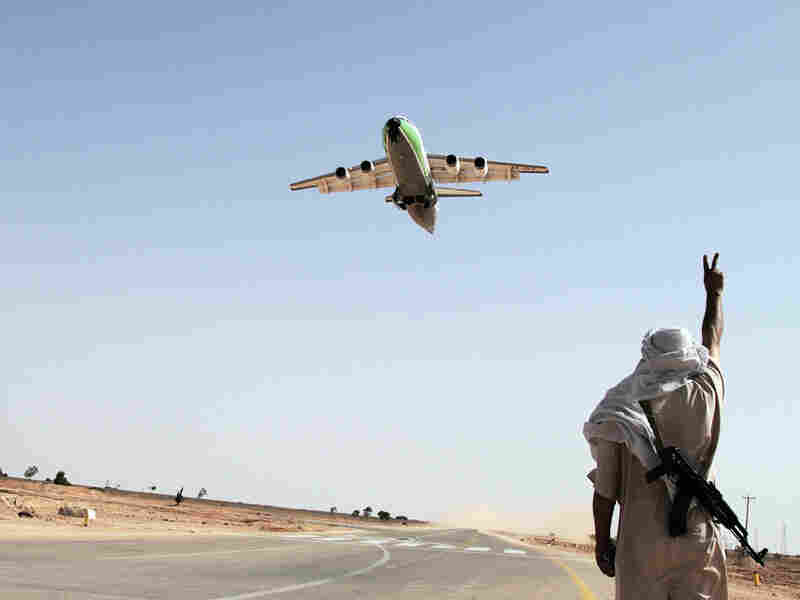 A Libyan rebel fighter flashes a victory sign as an aircraft carrying supplies for the rebels departs along a guarded mile-long stretch of road being used as runway, outside of Rhybat in western Libya, on July 19. Gaia Anderson/AP hide caption 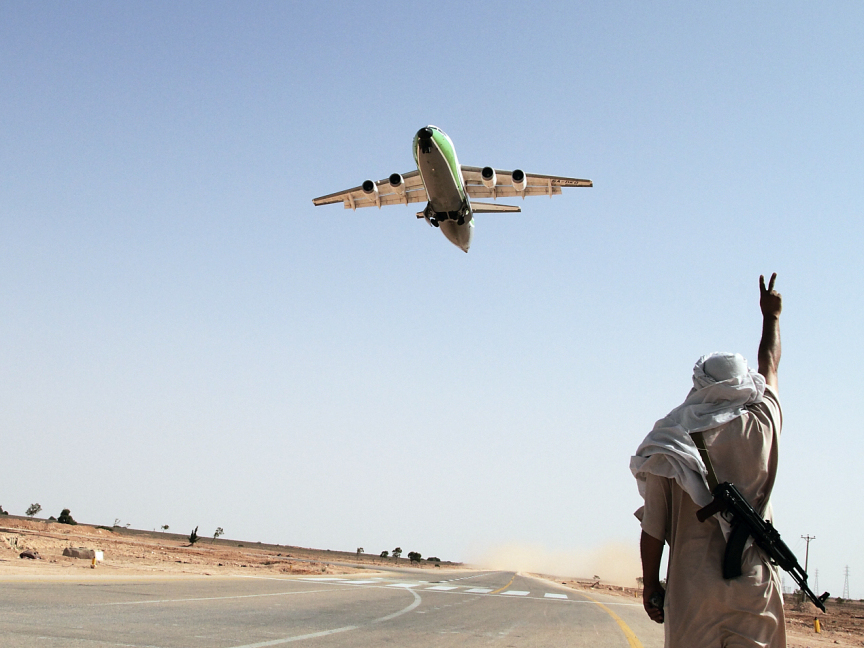 A Libyan rebel fighter flashes a victory sign as an aircraft carrying supplies for the rebels departs along a guarded mile-long stretch of road being used as runway, outside of Rhybat in western Libya, on July 19.

For several months, opposition troops have squared off against Moammar Gadhafi's forces on the ground in Libya. But for the most part, there's been only incremental movement along the front lines.

"Some of the areas that are left, we suspect have maybe have a bit more loyalty — or mixed loyalties — to the Gadhafi government than what was predicted by the people who expected this to be a quick war," says New York Times reporter C.J. Chivers. "So what's left now in front of these opposition forces often looks difficult. ... So what we see as we head into what may be a Ramadan lull is something that potentially looks like [a] stalemate."

Chivers, who covers the war in Libya for The Times, has spent the past several months traveling with anti-Gadhafi forces on the front lines. He recently wrote that the rebels "present a portrait of a guerrilla force that acts less like a coherent structure than a network of pickup fighting clubs."

"I'm talking about the rank and file — the guys who are actually carrying the guns," he tells Fresh Air's Terry Gross. "They're accidental combatants. They didn't see this coming. They're civilians. It's almost astonishing when you're riding with them in these convoys ... They're petroleum engineers and biochemists and laborers and welders and schoolteachers and lawyers and occasionally a doctor. And so you can't expect them to be competent, well-organized, tactically sound and technically proficient fighters. They don't have any experience in this."

Chivers says local rivalries, a lack of supplies and poor communication have affected the ways rebel fighters view the men they're fighting alongside.

"But the biggest suspicion that they feel is that in their ranks are informants," he says. "And so they're very worried that there are Gadhafi supporters who are relaying information." 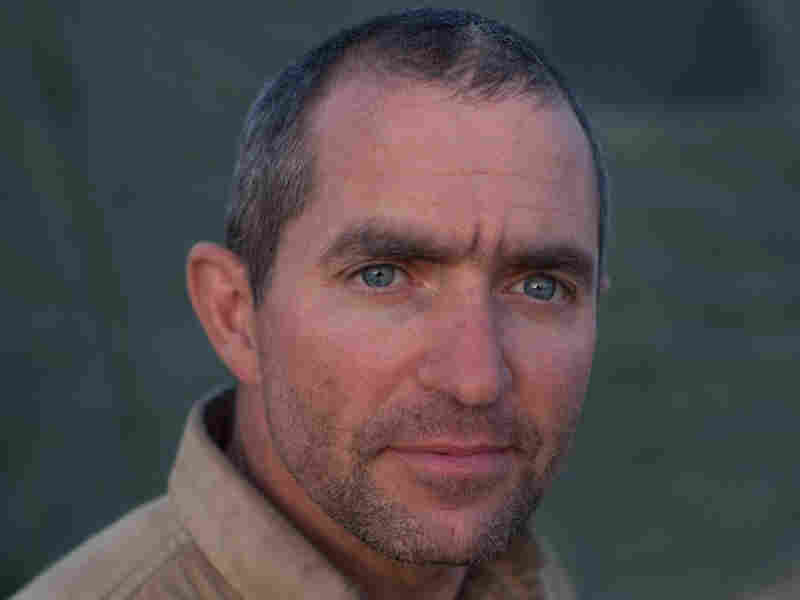 C.J. Chivers is a war correspondent for The New York Times. He won a Pulitzer Prize in 2009 as part of a team of reporters and photographers reporting from Pakistan and Afghanistan. Tyler Hicks/courtesy of the author hide caption 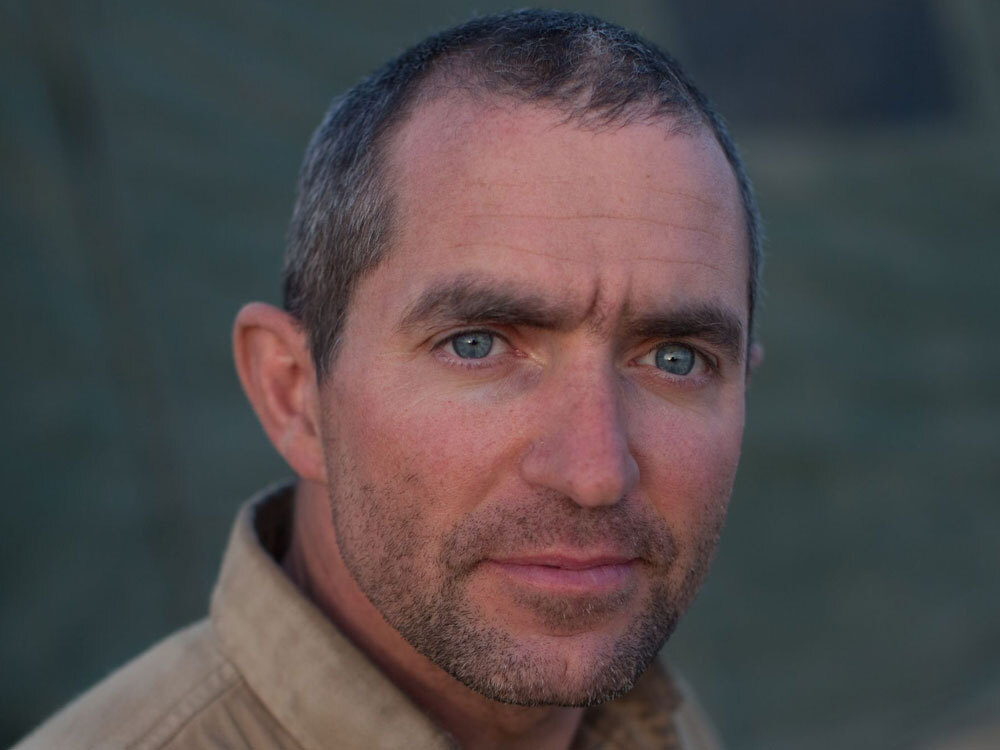 C.J. Chivers is a war correspondent for The New York Times. He won a Pulitzer Prize in 2009 as part of a team of reporters and photographers reporting from Pakistan and Afghanistan.

Tyler Hicks/courtesy of the author

Chivers says he recently almost got hit by a NATO airstrike that targeted an area already held by the rebels.

"It sounded like the sky falling and I knew immediately what it was because I had been close to a bunch of airstrikes in Afghanistan," he says. "I had enough time for one thought. It was kind of two words fused as one. I thought, 'Airstrike. Dead.' And I thought they got us."

The topography of the land prevented Chivers, his driver and his translator from getting hurt. After the strike, he says he immediately called The New York Times and told them what had happened. He then contacted NATO, which has been launching attacks on Gadhafi forces to keep them from waging war on the Libyan people.

"NATO has acknowledged that they put that bomb there," Chivers says. "But we haven't had a particularly expressive conversation with them because they've been unwilling to discuss any of the additional circumstances: whose aircraft it was, what kind of munitions were used, why they did it. They sent a statement that said something like, 'This mission in question complied with our mandate to protect civilians.'"

Chivers says that NATO did tell him that the mission was part of what it calls "dynamic targeting," which means the mission wasn't planned and that the pilot had leeway to find and direct bombs toward targets on the ground. But NATO wouldn't say much more than that.

"One of the problems we have with trying to decide as publics whether a war should be reported or how a war is faring or conducted is: If you don't have access to the real information, then you can say, 'Was this air campaign well-managed? Is it worth it? Are we getting the value for the bombs? Are we actually protecting people? What are the costs of that protection?'" he says.

Chivers has covered wars in Afghanistan, Iraq and Chechnya and served as the Times' Moscow correspondent from June 2004 through mid-2008. He also served as an infantry officer in the U.S. Marine Corps from 1988 to 1994. He received the Livingston Award for International Journalism for his coverage of the collapse of commercial fishing in the North Atlantic and shared a Pulitzer Prize in 2009 for his dispatches from Afghanistan and Pakistan. His book The Gun traces the migration of the AK-47 across the world and details the consequences of its spread.

Why Libya Matters To The Middle East's Future

"You can see in many cases when arms were manufactured. You don't know whether they were sold during the embargo period — the post-Lockerbie period. ... You can't know if this was illegal or legal sale. Certainly, though, much of it was legal. And it wasn't just the Eastern Bloc — not just the former Warsaw Pact or China or Russia who have sold these. You find on the ground lots of munitions from the West, too — from France, from the United States, from Great Britain, from Spain, from Belgium — everyone was in on this game."

On finding cluster bombs in residential neighborhoods from Gadhafi forces

"A counter story [by a group called Human Rights Investigations] was presented on a website and in this counter story the cluster bombs had been obtained by the United States and fired by the U.S. Navy into the city of Misrata. And there's no evidence for that except for that website saying so. And you can actually trace [this] particular class of weapons back to a shipment that Spain [shipped to Libya] just before the international convention on cluster munitions was signed by Spain. ... The claims [from Human Rights Investigations] were taken down, but the claims continue to live on other sites that cut and pasted them and circulated them about."

On reporting in Libya

"I'm wearing a helmet; I have a flak jacket. And there's other forms of protection besides physical protection. After watching the Gadhafi forces for a couple days, for the first few days I was moving slowly forward, trying to figure out how the artillery and mortar fire was being directed. Because if it was haphazard, it's one thing. But if it was well-conceived, it would be another. And what we found, after a few days of watching, was that whoever was directing the artillery fire and the rocket fire was quite good at it. And that information can help you keep yourself alive because as soon as I realized that this fire is observed and these gun lines are able to mass three or four tubes of ammunition in a small place very quickly and able to shift targets, I realized, 'OK, that lays out this map for me in a totally different way.' ... I said, 'We'll go up and down these roads but we're not stopping at intersections."