Accessibility links
Somalis In America Strive To Help Those Back Home As drought engulfs the Horn of Africa, Somalia is among the hardest-hit because of its ongoing civil war. In America, refugees from Somalia are doing what they can to help — from organizing aid groups to holding charity events, such as car washes.

Looking To Help Out 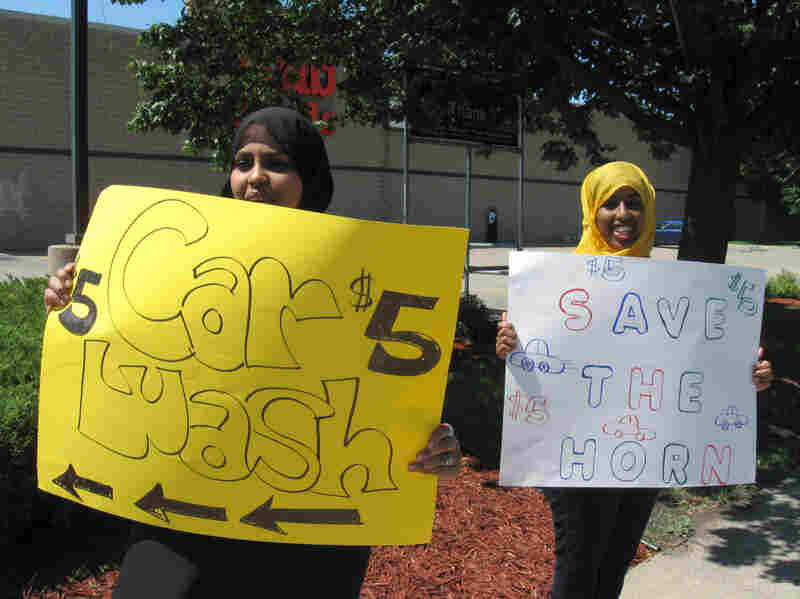 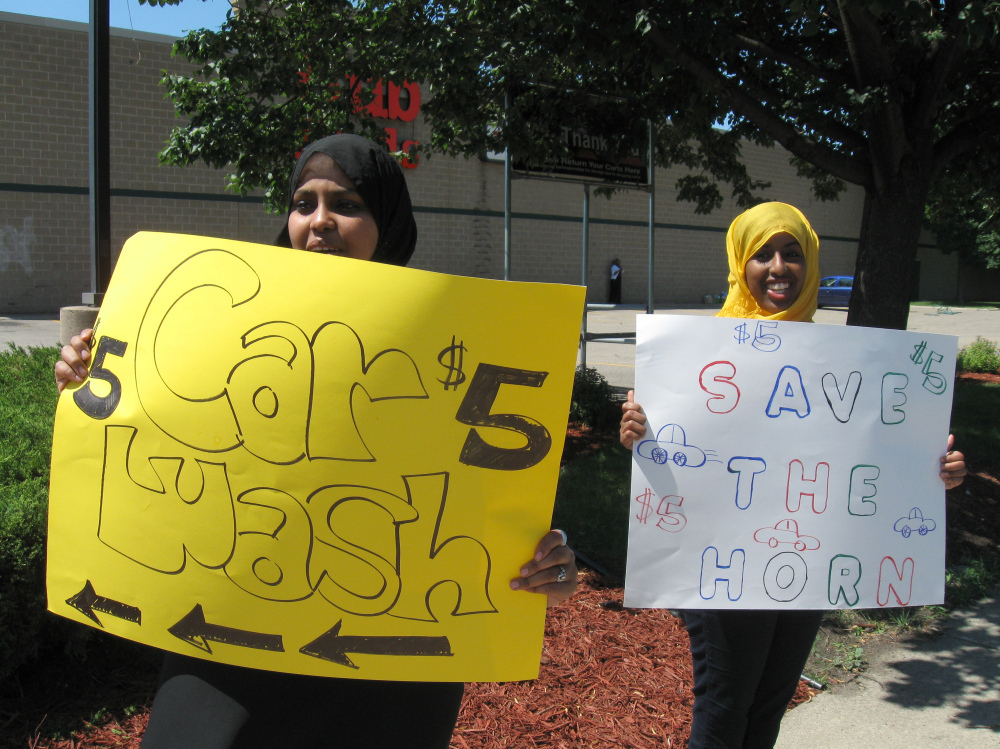 Iman Warsame (left) and Fardosa Ahmed drum up business for their car wash; proceeds from the event (below) went to help drought victims in Somalia. 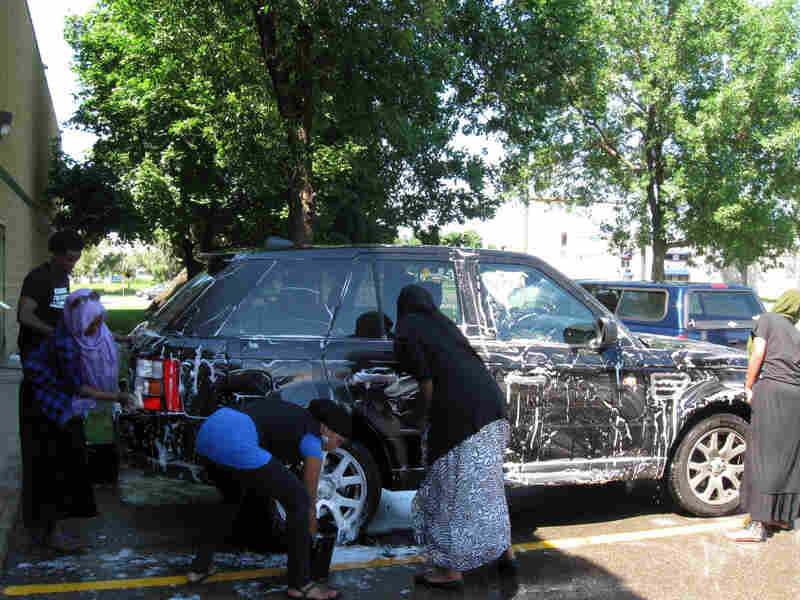 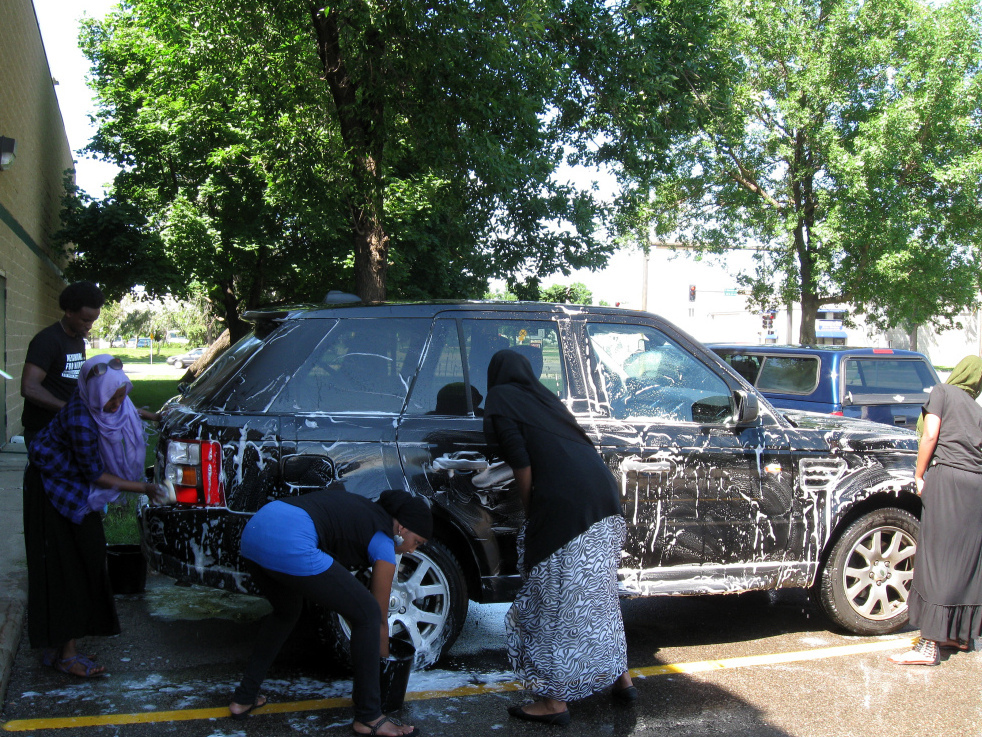 As drought engulfs the Horn of Africa, Somalia is among the hardest-hit nations because of the ongoing civil war there. With few international aid groups or media on the ground, many Somalis living in the large refugee community in Minneapolis feel they must be the voice for famine victims. After all, many say, they have their own memories of the hunger and violence they escaped.

Sultan Aliyoow is consumed by the suffering in his homeland. In this afternoon, he's going door to door to Somali-owned businesses in South Minneapolis.

"So we have Somali tribes that own businesses, and I've got to talk to all of them also, one by one," he says.

The Karmel Mall is a warren housing small merchants, travel agents, money transfers and tax offices. Shaking hands with everyone, Aliyoow reminds them to come to a weekend fundraiser.

Speaking in Somali, he urges them to call their relatives back home to check on how they're doing. Wiring money to Somalia is an expected part of life in this new immigrant community, but Aliyoow is imploring them to do more.

Many of the hardest-hit areas are controlled by al-Shabaab, an Islamic militant group the U.S. government considers a terrorist organization. In the past two years, prosecutors have charged 20 Minnesota Somalis as part of the FBI's investigation of alleged sources of material support to al-Shabaab.

One of the fears in the Somalia community is that money wired for famine relief could fall into the wrong hands.

To try to avoid that, they're forging partnerships with humanitarian groups.

Daniel Wordsworth heads the Minneapolis-based American Refugee Committee. Two years ago, he was approached by local Somalis who wanted ARC to go into Somalia.

The U.N. World Food Program considers Somalia the most dangerous country in the world. And Wordsworth said he would go in — only with the help of local Somalis.

After two years of planning, Wordsworth says, ARC now has a Somali team working in Mogadishu.

"They have family members on the ground that they're talking to every single day, and many of these people have been here more than 10 years," Wordsworth says. "So they're trained doctors, they're trained engineers. They have skills that can be taken back to their country to make a difference."

And there's a feeling in this immigrant community that they must make a difference.

Fadumo Mohamed, 26, runs a home health-care business. She's haunted by thoughts of her elderly uncle, left alone in the drought.

"After a couple days they found him, and he was blind. He lost his sight — lack of water," she says. "And I'm like, every single time I'm showering and I have all this water around me, I just thank God for what we have here."

In a grocery store parking lot in south Minneapolis, Somali college students hold a fundraiser, offering car washes for $5. Ifrah Esse, 26, is one of the organizers. She graduated from the University of Minnesota and now works as an international sourcing specialist for Target.

"Twenty years ago, I was in a predicament where I was in a refugee camp," she says. "And no one could imagine that here today, being a college graduate and working, that that was me, 20 years ago. But I know. That was my reality. When I see pictures, when I see people starving, when I see people that have no hope — I can relate to that."

In this parking lot in Minneapolis, they earned $860 washing cars. The money went directly to the American Refugee Committee, to help those suffering from hunger in Mogadishu.