Accessibility links
In Somalia, Aid Trickles In To Famine-Ravaged Areas The United Nations has begun airlifting emergency food relief supplies into Somalia's capital. Families fleeing hunger and conflict in the troubled state are streaming into Mogadishu, seeking refuge and food. But there's a funding shortage of $1.5 billion in efforts to aid the 11 million people affected by drought, humanitarian workers say. 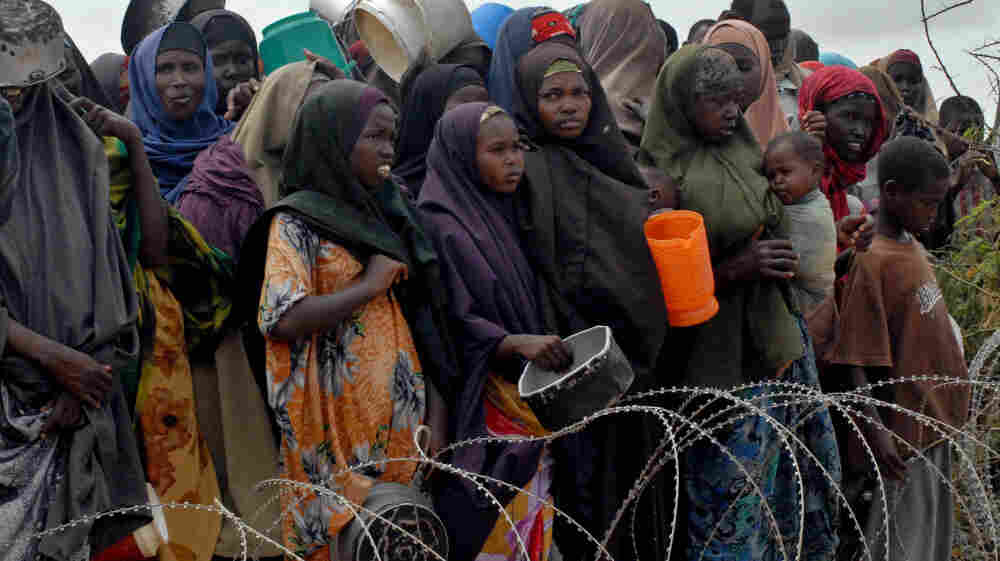 Internally displaced Somalis wait for food at a distribution point at the government-run Badbaado refugee camp in a suburb of the capital Mogadishu on Tuesday. The U.N.'s World Food Programme said its airlift to Mogadishu for drought victims was delayed Tuesday because of last-minute bureaucratic hurdles in Kenya. Mustafa Abdi/AFP/Getty Images hide caption 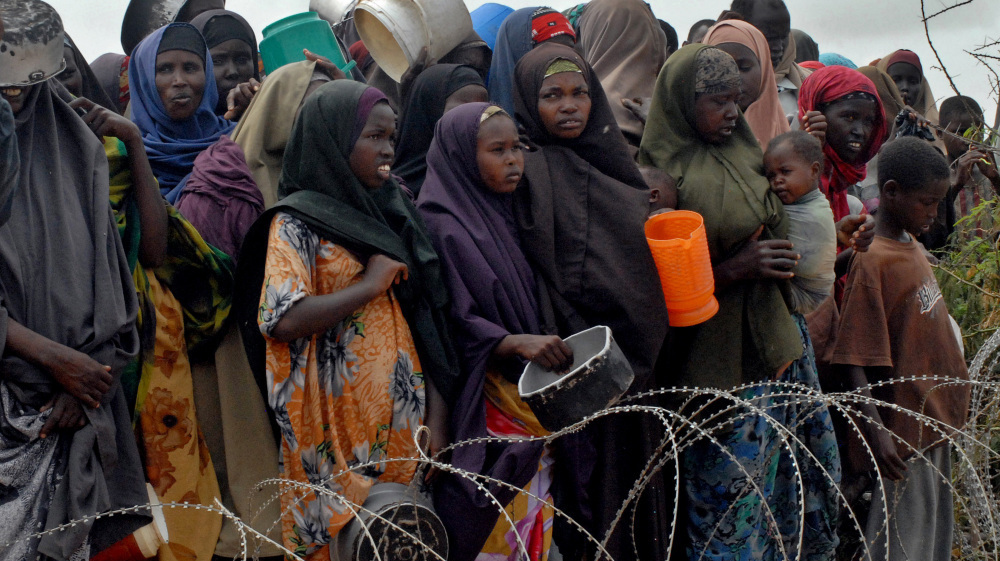 Internally displaced Somalis wait for food at a distribution point at the government-run Badbaado refugee camp in a suburb of the capital Mogadishu on Tuesday. The U.N.'s World Food Programme said its airlift to Mogadishu for drought victims was delayed Tuesday because of last-minute bureaucratic hurdles in Kenya.

The U.N. has begun airlifting emergency food relief supplies into the Somalia's capital after an initial delay. Families fleeing hunger and conflict in other parts of the failed state continue to arrive in droves in Mogadishu, seeking refuge and food.

With a famine declared in two areas, Somalia is hardest hit by a devastating drought affecting 11 million people in the Horn of Africa.

Wednesday brought another day, another flight, another delegation of VIPs, meeting and greeting local government officials on the ground. This time it was the U.N. World Food Program, on an assessment mission to Doloow in Somalia, near the border with Ethiopia. Thousands of Somalis are flooding into Doloow in search of food, shelter and medical care.

"There is famine in Bakool — that's why I came here, because of the drought," said Abdir Hussein, one of those seeking help. "That's why we've been forced to come out from Bakool and come here. I haven't got any food yet, any assistance."

Josette Sheeran, head of the World Food Program, says the children are the priority.

"Our focus really is on the people that have not had access to the help in aid and trying to be able to reach those who are in dire need of the help," she says.

The landscape in Doloow is bleak and dusty, with occasional thorn trees offering some shelter and shade to dozens of families squatting and sitting beneath. The sandy, rocky soil yields very little vegetation. Nearby, a one-man operation has rigged up a mini water tank at the back of a donkey cart. A line quickly forms as a young boy struggles to keep up with requests to fill buckets and water bottles. Across the way, local volunteers are registering more new arrivals. The Doloow district commissioner, Abdirashid Hassan Abdinur, says help is urgently needed.

"The famine in Somalia, especially the one in Doloow, this district, it needs an urgent support. We hope for practical action," he says.

Desperate Somalis are crossing by the thousands into neighboring Ethiopia and Kenya. But they're also heading to the capital, Mogadishu. The city is divided – one part controlled by Somalia's weak U.N. and U.S.-backed interim administration. Other areas of Mogadishu and Somalia are in the hands of the anti-Western, al-Qaida-affiliated militant Islamist group al-Shabaab, which opposes the government. Somalia's prime minister, Abdi Weli Mohamed Ali, is appealing for urgent international food aid deliveries.

"The extent of the drought is very huge, so therefore we expect more and we need more," he says.

Last year al-Shabaab banned the U.N.'s emergency food agency from operating in areas it controls in Somalia, accusing the World Food Program of pushing a pro-Western agenda. On Wednesday, the WFP began a series of emergency airlifts to Mogadishu, carrying ten tons of a peanut-based therapeutic supplement to the capital for malnourished children.

Regional spokesman David Orr was on board the first flight.

"I understand we are reaching about 18,000 children. There are, of course, security concerns here in Mogadishu as everywhere, but this is an emergency," he said.

Wednesday's delivery to Mogadishu is the first airlift of food aid to Somalia since the U.N. declared a famine last week in two areas in the south, with more airlifts to come. But the U.N. and humanitarian groups are warning that there is a funding shortfall of more than $1.5 billion and are appealing for cash urgently to be able save more lives in the drought-stricken Horn of Africa.