Accessibility links
Five Things Learned During A Strange Evening At The Playboy Mansion Playboy TV held an event for TV critics at the Playboy Mansion on Wednesday night. Perhaps you know about the monkeys and the peacocks and the grotto, but just in case you don't, please join us. 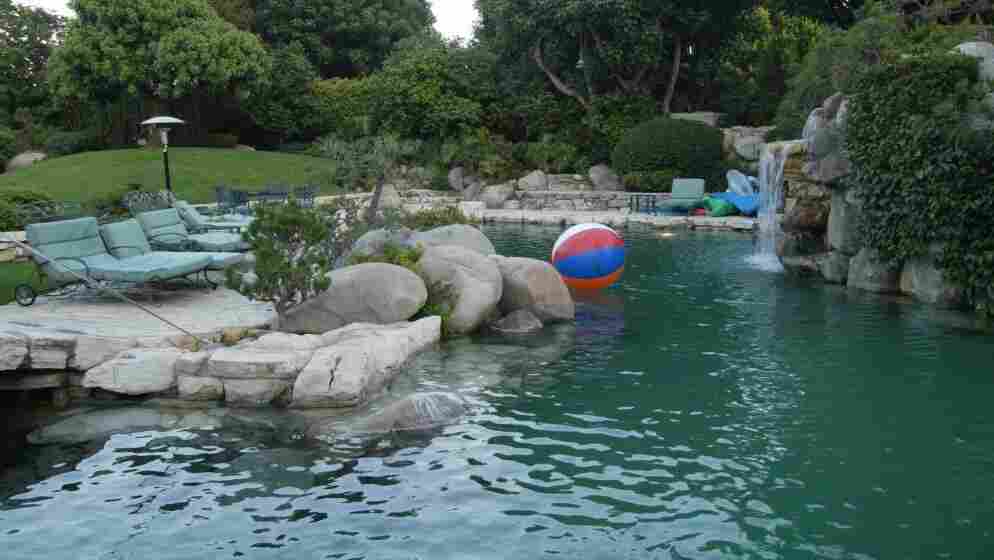 This shot of the Playboy Mansion pool and the outside of the grotto was taken in 2002. It looks very much the same now. Frazer Harrison/Getty Images hide caption 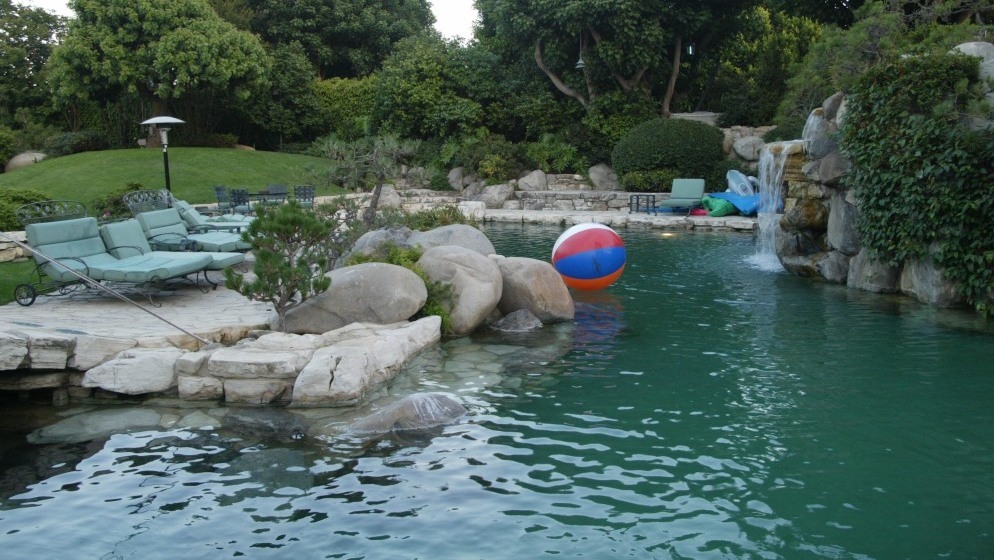 This shot of the Playboy Mansion pool and the outside of the grotto was taken in 2002. It looks very much the same now.

As far as I know, Playboy TV has never done a press tour event before, but this year, they're bringing on some new content aimed at "couples." (I interpret this to mean that they would like to befriend women.) And to introduce it, they decided to throw a press event at the Playboy Mansion, which is how I wound up sitting on a shuttle bus Wednesday night wearing a silvery wristband with a Playboy bunny logo on it.

We toured the mansion in little groups, we nibbled on finger food (the corn dogs were, I have to admit, pretty good), and we watched warily as beautiful people who were definitely not television critics (or writers of any kind) flashed their tans at each other. I don't really have a narrative here, but I can tell you five things I learned from my visit.

Hugh Hefner has a zoo. Now, I know that many people know this, particularly those who watched a lot of the reality show The Girls Next Door, which took place right there at the mansion. I, on the other hand, never watched The Girls Next Door, ever. EVER. So for me, the zoo was rather surprising. There is a big cage full of little monkeys, and our tour guide (Pilar, a Playmate from 2004, who did a great job) tells us that Hefner is also a "bird collector." Some of these birds are peacocks, which walk around the grounds saying something that, no lie, sounds like "HELP! HELP!" (Apparently, there was a whole Girls episode about the peacocks. As I said, I didn't watch it.)

The grotto is not sexy. There's a lot of legend surrounding the grotto, which is basically a big artificial cave with whirlpools in it. And, of course, next to the whirlpools, there are big mats, which are generously referred to as "mattresses," which we are told are here so people can "take naps." At the moment this is revealed, this crew of TV critics is standing on one of these mattresses. That's right. At the Playboy Mansion, they "take naps" on it, and I am standing on it. At exactly this moment, as I am balancing on a "napping" mattress with my hand on the fake stone ceiling to balance (that's what Pilar says she always does), one of my favorite writers from press tour, whom I haven't seen yet this year, comes over and gives me a hug. "I'm hugging you in the grotto!" she says, which really makes me laugh.

But the grotto, in general, is a little depressing, and not just because of articles like this. It's really hot and humid, like a locker room at the Y. Being hugged in the grotto is about as much physical contact as I would ever want with another person in there, just because it's so ... dank and sweaty. (I would be the first person in grotto history to actually take a nap. My squareness, it is epic.)

Everything has the logo. Everything. As we were driving in on the shuttle that brought us from the hotel to the party, I spotted a ladder off in some bushes beside the road. You could barely see it; it was just a wooden stepladder somebody was using for some yardwork purpose or another (or ... for naps in the woods, I guess, although ... never mind). It was painted red, and down the leg of the ladder, there were little Playboy logos in black. That bunny head is ubiquitous, I tell you that.

Yes, it feels vaguely like being in Dirty Narnia. Look, being at press tour always brings me in contact with a lot more super-white teeth and super-tanned skin and super-tiny women and super-shiny-chested men than I encounter in my day-to-day life — and I'll have you know, a lot of them are really, really nice people. They're just ... L.A.

This is Different. With a capital D. The actual Playboy women are one thing; they're just sort of hot Hollywood types, and although their dresses are very short and very tight, they give off that vibe that Playboy is always trying to give off, that it's sexy but playful and not sad. As I said, everybody liked Pilar — not only did she know a lot about the house, but her reference to a bedroom as a "dormitory" led to a discussion about how Spanish was her first language, and she lost her accent as a result of aggressive speech therapy pushed on her as a kid in public school in Texas, where she was also forced to become right-handed instead of left-handed. Who knew that happened that recently? But she was a woman you could chat with.

There are other people at the party, though, who seem a little more ... down on their luck. They don't look so happy. These are the women whose dresses are actually riding up to the point where their behinds are hanging out the bottoms of their dresses. (None of the actual Playboy-branded women would be caught dead in that state, I don't think.)

At some point on the tour, we actually start ribbing Pilar about all the rooms that she tells us are for napping, including one room that is designed to be like the back of a van, so that the floor is the mattress. The repeated references to napping seem both oddly cutesy and terribly important to how they do things here. It's okay to show a bunch of reporters a little outbuilding that has basically just pinball machines and beds, but you have to say "napping."

And it just gets more and more otherworldly. At one point, one-time supermodel and veteran of America's Next Top Model, The Surreal Life, and Celebrity Rehab Janice Dickinson comes up to me and one of my press tour friends to tell us about her new Playboy TV show, which I'm pretty sure she refers to as Celebrity Sex Tapes (it's actually called Celebrity Sex Tales) where she says she'll talk about some of the famous men she's slept with. In a way, I admire the fact that she doesn't say she's going to talk about all the men with whom she took naps.

Parts of the show are animated.

After that, I was ready to head back to the hotel.