Accessibility links
Movie Review - Space Invaders Strike 'Cowboys' And 'The Block' The multiplex-traterrestrials have landed, with two new films about aliens invading Earth. Ian Buckwalter prefers the scrappy, lo-fi attitude of British import Attack The Block to the too-slick Western mashup Cowboys & Aliens, which is unable to capitalize on a clever premise and game cast. 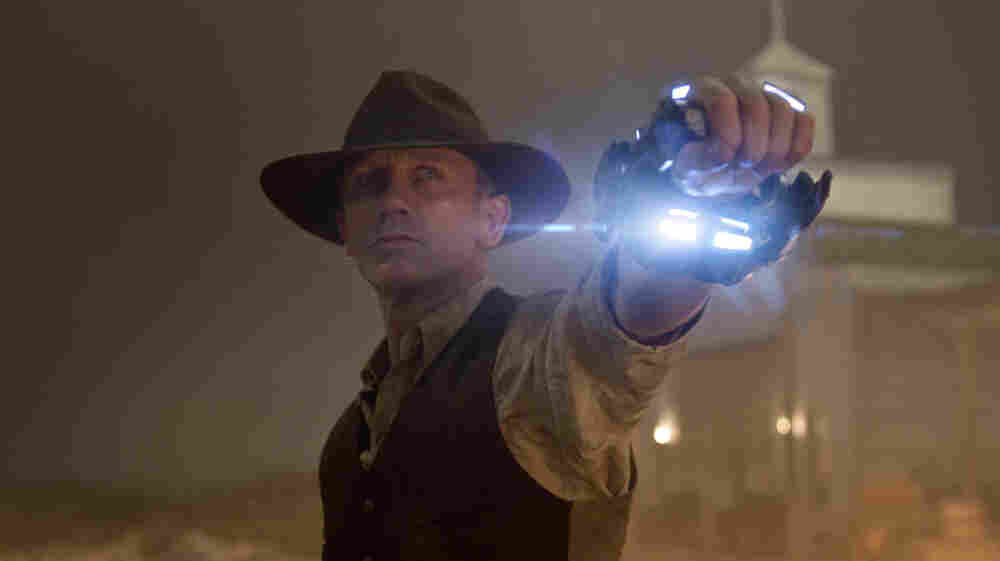 Bluest Hand In The West: Daniel Craig is the strong, silent type in Cowboys & Aliens, playing an mysterious outsider with a connection to the space invaders who have descended on the film's mining town. But his classic Western antihero can't defeat the film's cold, rote special effects. Zade Rosenthal/Universal Studios hide caption 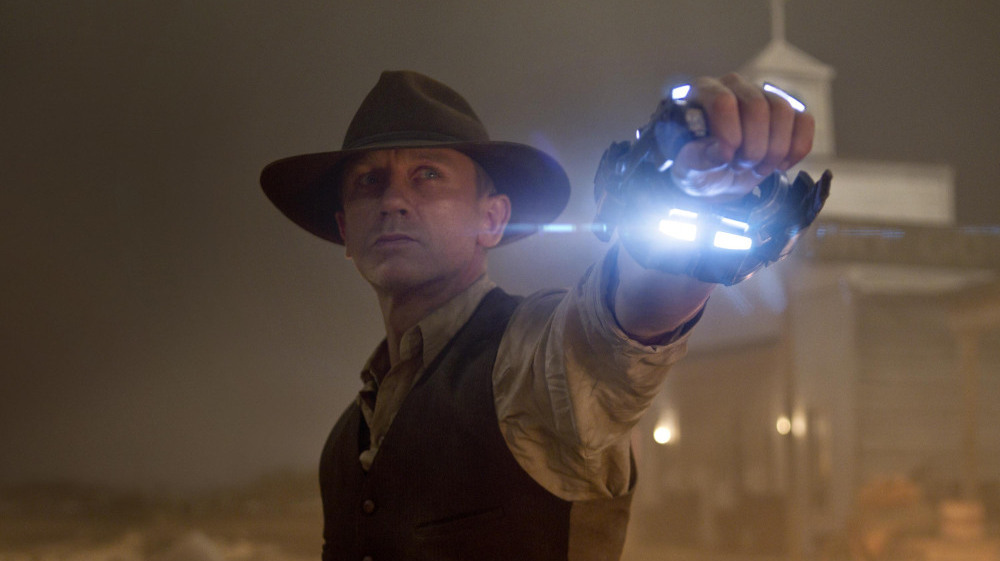 Bluest Hand In The West: Daniel Craig is the strong, silent type in Cowboys & Aliens, playing an mysterious outsider with a connection to the space invaders who have descended on the film's mining town. But his classic Western antihero can't defeat the film's cold, rote special effects.

Rated PG-13 for intense sequences of western and sci-fi action and violence, some partial nudity and a brief crude reference

If we're to believe the movies, Earth may be the single most sought-after address in the galaxy. Creatures from beyond the stars are constantly making cinematic pit-stops here for purposes ranging from, "Howdy, neighbors," to "My, don't you all look tasty!" This week finds two hostile forces taking over American theaters, and though the basic story beats of the alien invasion genre are intact in both, their settings and results could hardly be more different.

The beasties in both Joe Cornish's Attack the Block and Jon Favreau's Cowboys & Aliens are inclined to subtle infiltration, as opposed to the park-massive-spacecraft-above-major-city approach of those in Independence Day or District 9. In Block, they arrive in the housing projects of South London in meteor-like pods, their fiery descent camouflaged by the Guy Fawkes Night fireworks exploding all over the city. The furry black aliens, armed with a mouthful of luminous teeth, are here to breed, though what it means for humanity if they succeed isn't quite clear.

In Cowboys, the somewhat more typically monstrous visitors — large, with sharp claws and simultaneously reptilian and insectile features — are already here at the movie's start. Like most travelers setting up shop in the late 19th-century American West, they're in search of both gold and a new place to call home, even if that means subjugating or killing the indigenous population. One almost wishes the movie's Indians could sit back and watch the settlers be decimated just so they'll know how it feels to be on the other side of the equation.

Cornish's film centers on a group of teenage miscreants, led by the aptly-monikered Moses (John Boyega). As he and his crew are mugging Sam (Jodie Whittaker), a young nurse on her way home late at night, the first alien lands, and with that, the movie (and Sam) takes off at a sprint. The director doesn't waste much energy on exposition and setup: there will be plenty of time to get to know this crew as they attempt to defend their block, themselves, and their weed from a steadily growing force that seems bent on going after them and them alone.

Boyega is absolutely riveting, leading with a stern glower, and constantly trying to prove himself. Yet Moses has a deep well of tenderness and honor beneath the façade, and Boyega almost single-handedly makes you care not just about his character, but about everyone in any gang that would align itself with him. He's that magnetic. Each of these characters has a distinct identity, and Cornish engages the audience in each of their fates, adding layers to their characters amid a steady stream of jokes, heart-pounding chases and anxious horror movie set pieces.

Much like another modern British horror-comedy classic, Shaun of the Dead, Block is irreverently funny without ever being spoofy. Cornish obviously has a deep love for the movies that serve as inspirations here, mostly cultish '80s flicks like Night of the Comet and Critters. But his sharp wit as a writer turns the film into more than the trashy sum of its predecessors. The one-liners are hilarious, and he has a deft touch at weaving social commentary on urban gentrification into the narrative by forcing the teens, Sam, an affluent stoner college student (Luke Treadaway) and a middle-aged drug dealer (Nick Frost) to fight alongside one another, working out their issues on the fly.

The scruffy, chaotic appeal of Cornish's film, which does most of its sci-fi trickery with practical effects, stands in stark contrast to the polished professionalism and digital wizardry of Cowboys & Aliens. With two Iron Man films under his belt, director Jon Favreau has a solid handle on how to deliver big-budget spectacle. And that gloss guarantees that the movie remains largely inoffensive, even when the story fails to inspire.

Daniel Craig and his icy blue gaze star as Jake Lonergan, a bandit who wakes up in the rocky New Mexico desert with no memories and no trace of what's happened to him, apart from a nasty wound in his side and a strange, bulky bracelet firmly clasped around his wrist. Finding his way into the local mining town, he's quickly identified as a wanted man, but his stagecoach to trial in Santa Fe is waylaid, first by Woodrow Dolarhyde (Harrison Ford), a man he stole from, and then by a sudden attack of aliens aboard small fighter crafts, lassoing and kidnapping the town's residents as they swoop down. 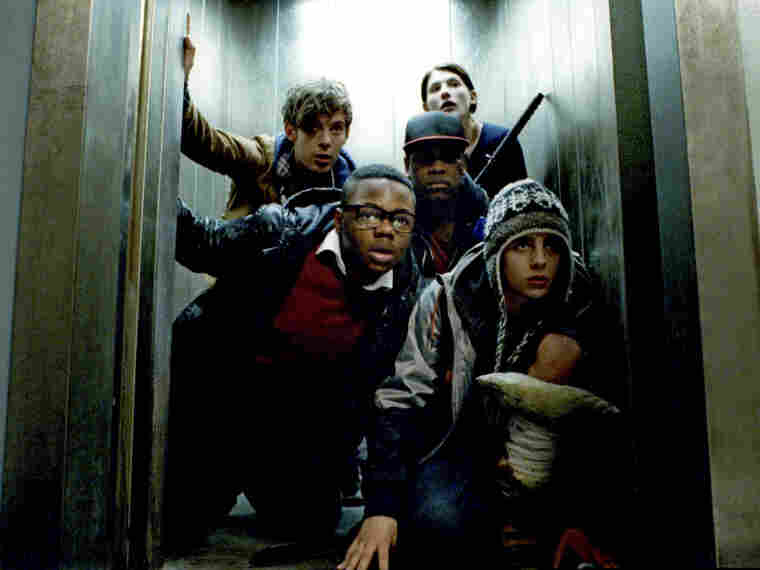 You can tell Favreau is having plenty of fun hitting all of his favorite Western elements: the silent stranger riding into town, the gang of bandits, Indian trackers, the thundering hooves of a posse on the move. At the start, it appears he's willing to treat the material with the winking tone a movie titled Cowboys & Aliens probably demands. Craig spends the first couple of scenes barely saying a word, shamelessly (and satisfyingly) channeling Clint Eastwood's "Man with No Name," and Favreau gives Ford's character a grand reveal that might as well bear the subtitle, "Yes, I do realize I've got Han Solo and Indiana Jones in my sci-fi Western, and it's pretty awesome, don't you think?" Ford plays along gamely, having more obvious fun playing a quasi-bad guy here than he's had onscreen in years.

But the restrictions of making a movie for the masses keep Favreau from taking the same kinds of risks that Cornish can in his film. It's easy to pick out who's going to have to die, and who's going to make it to the end of Cowboys, and that reduces the stakes to the point where the movie descends quickly from its fun exposition to a collection of meaningless explosions and predictable action sequences. Contrast that with Block, with its consistently breathtaking pace and a real sense that anything could happen to characters that you care much more about.

Based on a graphic novel, Cowboys & Aliens never quite transcends the flat dimensions of its source material. Given the choice of which world feels more real, and more worthy of saving from the approaching alien hordes, I have to go with the potty-mouthed London lads.