Accessibility links
At 7 Days, Egyptian Babies Mark First Rite Of Passage In Egypt, families hold a ritual called the Sebou to formally acknowledge their baby to the world. The tradition dates back to the Pharaonic times. But since the revolution earlier this year, which affected the economy, the ceremonies have been tempered.

In Egypt, survival and the number 7 are inextricably linked. It's on the seventh day that a child's existence is first formally acknowledged to the world in a ritual that dates back to Pharaonic times.

But the ancient tradition — called the Sebou — has taken on new and not always happy turns since a revolution earlier this year ousted longtime President Hosni Mubarak.

Rabaa Amin Mahmoud watches proudly as a relative banging a mortar and pestle leads a time-honored procession for her newest grandson around the family compound outside of the Nile Delta city of Mansoura.

The noise startles the baby, named Hamza, who stirs in his mother's arms. Loud noises are part of this ancient Sebou ritual aimed at building an infant's character and making the child brave.

Mahmoud says this ceremony almost didn't happen. She explains that her daughter and son-in-law thought about calling it off after a relative died unexpectedly the night before, and their older daughter became ill. 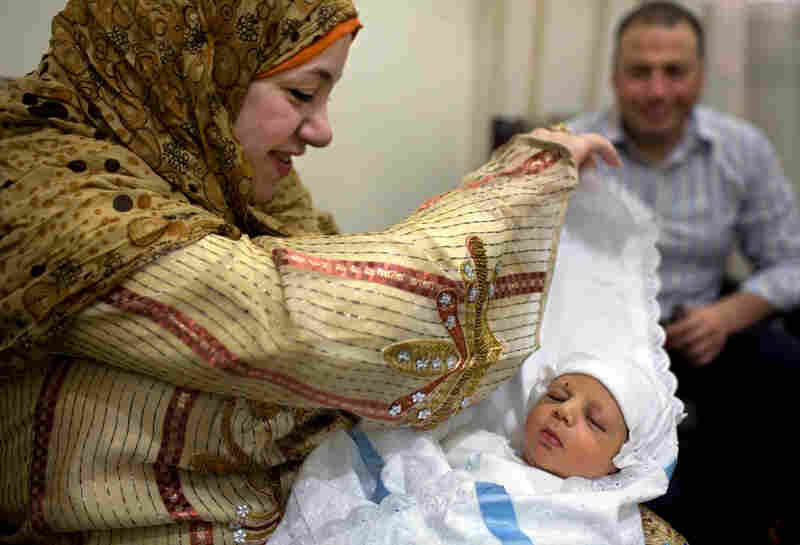 Israa Saad Diab lifts the cover from her son Hamza's face, while her husband, Ibrahim Muhammad, watches, after the traditional Sebou ceremony in Mansoura, Egypt, on May 27. Holly Pickett for NPR hide caption

But the family decided to stick with tradition and acknowledge Hamza's entry into the world, especially after his rocky start with jaundice and breathing problems.

Celebrating an infant who has survived the first seven days of life is a practice dating back thousands of years in Egypt. Back then, disease and poor nutrition meant babies were more likely to die than live.

These days, infant mortality rates are far lower, but Sebou is still widely embraced by all Egyptians, whether Christian or Muslim, rich or poor.

"It's the first rite of passage that differentiates a boy from a girl, that establishes this newborn as continuation of the family, that establishes a mother's and a father's roles," says Hania Sholkamy, an anthropologist at the American University in Cairo. "The ritual itself is all about advising the newborn about warding off evil spirits, about strengthening it, about giving it, you know, guts and a will to live."

Sholkamy says Sebou is also one of the few ceremonies celebrating the baby's mother. One of the traditional drinks served to guests is an expensive herbal concoction called moghat, which is meant to spur breast milk production in lactating women.

But Sholkamy says that as with many ancient rituals, Sebou has its detractors. They object to it as a pagan rite.

Like Christmas, Sebou over the years has taken on a commercial feel, one that often highlights the vast class divide in Egypt.

In downtown Cairo, dozens of shops tucked along narrow alleyways are dedicated to Sebou-related fare. On display are the traditional urns, candles and cradles used in the ceremony. They are decorated with glittery fabric and ribbons, with blue for boys and pink for girls.

Sebou party favors are crafted in nearby workshops. Female workers take small Chinese-made crystal and porcelain figurines, and glue them to plastic bases etched with babies' names and birth dates. Others create little bags of candied almonds and chocolates.

Hamza's father, Ibrahim Muhammad, drove to Cairo the week before his son's Sebou ceremony to buy party favors. The $100 he spends is a fortune to most Egyptians. But it also represents a steep discount over the normal price, given he's the only customer ordering on this day.

Sales clerk Rasha Mamdouah says Sebou-related sales are way down this year. Where she used to get an average of seven daily orders, Mamdouah says she's lucky to get a single order nowadays.

She and other shopkeepers here attribute the slowdown to the growing financial hardship Egyptians face in the wake of the revolution that toppled Mubarak and crippled the economy.

They say early on in the uprising, many Sebou customers — in a show of patriotism — requested little flags or anti-government slogans to be added to party favors. These days, no one asks for those things.