Accessibility links
Immigration, Integration Draw Attention In Norway The brutal twin attacks by self-proclaimed Christian crusader Anders Behring Breivik have reignited an immigration debate in what had appeared to be the most serene multicultural society in Europe.‪ 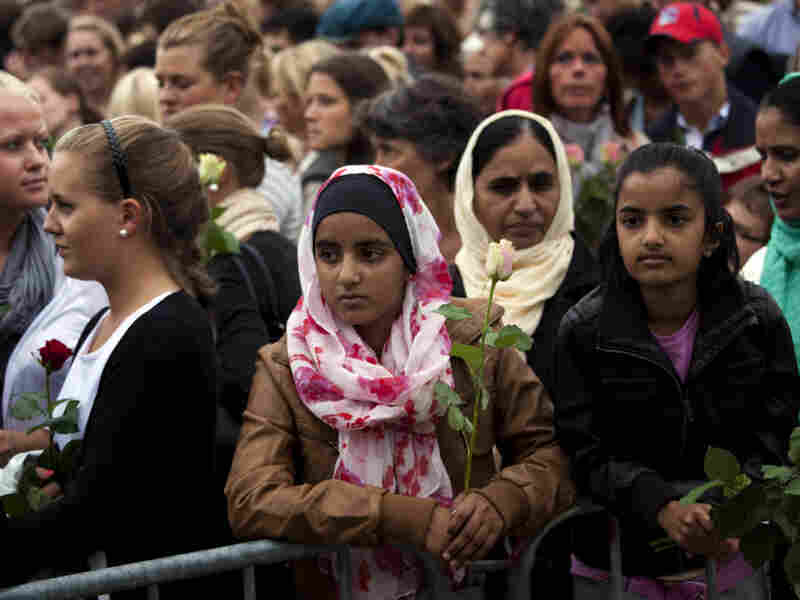 People gather outside Oslo City Hall on Monday to participate in a "rose march" in memory of the victims of Friday's twin attacks in Norway. Anders Behring Breivik, who admitted to the attacks but entered a plea of not guilty, said he wanted to save Europe from Muslim immigration. Emilio Morenatti/AP hide caption 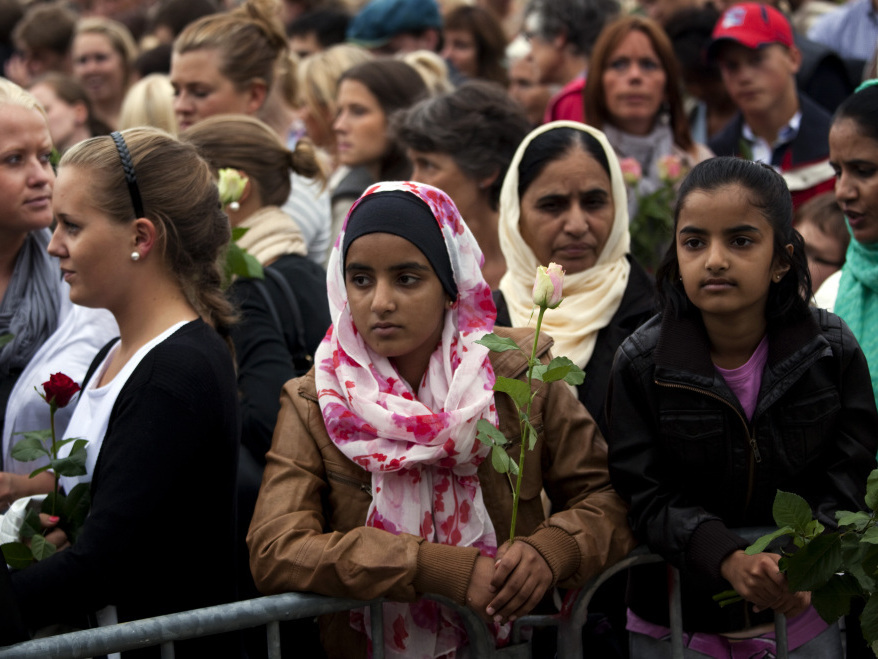 People gather outside Oslo City Hall on Monday to participate in a "rose march" in memory of the victims of Friday's twin attacks in Norway. Anders Behring Breivik, who admitted to the attacks but entered a plea of not guilty, said he wanted to save Europe from Muslim immigration.

The brutal twin attacks in Norway last week by self-proclaimed Christian crusader Anders Behring Breivik have reignited an immigration debate in what had appeared to be the most serene multicultural society in Europe.‪ Norway's long-standing reputation as a welcoming haven for immigrants is being tested as its Muslim population grows.

Many immigrants live in the Oslo neighborhood of Greenland. There are a few indigenous Norwegians, but they rush by.‪ Many women shopping at grocery stores wear the hijab.‪

At a cafe run by a Lebanese, the only customers are men — several Arabs and many Somalis.‪ They don't like to talk into a tape-recorder, but they will say they were shocked by the July 22 attacks. They're also relieved that the confessed perpetrator was a Norwegian, not a Muslim. They say their main concern is to keep a low profile.‪

The atmosphere changes sharply in a nearby square lined with trendy shops, sushi bars and outdoor restaurants.‪ Among those in the square is Eric Lundesgard, a member of the Conservative Party, which is currently in opposition.‪ He says integration is the key to immigration.

"Integration to some extent means being more Norwegian. Norway is quite a homogeneous country," Lundesgard says.

But that thought would seem to echo the ideas propagated by Breivik in his 1,500-page screed against Muslims and multiculturalism.‪

"I believe that many of his thoughts ... about the multicultural society and political correctness [are] quite common," Lundesgard says.

Tunisian Yassim Mansour says it's hard for an immigrant to live in this society.‪

"When they show their apartments, you go there with 16 other Norwegians, they take the Norwegian one, and this is a fact," he says.‪ "Here, when I am at work, if I have to pray — I am Muslim — I have to hide myself and don't tell anyone. If they ask me, I say I have been in toilet."

Mansour says integration should not mean that he has to lose everything about his cultural identity.‪

Norway Questions Its Tolerance Of Extremism

Large-scale immigration began in Norway in the '70s. At first, many Norwegians worried foreigners could take away their jobs. But because Norway became very rich — thanks to oil — and there are virtually no jobless, the debate shifted to the more insidious terrain of cultural differences.‪

The number of immigrants has more than doubled since 1995, and growing tensions have led to more division.‪ Indigenous Norwegians have increasingly fled neighborhoods inhabited by immigrants, citing worsening educational standards in public schools.‪ Also, says Iranian-born human rights activist Ali Esbati, the notion began to circulate that Muslims in particular — because of their religion — could not become good Norwegians.‪

"This new kind of right-wing milieu, the Eurabia literature, this idea that the West is being taken over, these ideas were quite marginal until recently," Esbati says, "but they have moved more and more toward the center of things, main public discourse, that is the real problem for long-term social development."

Sociologist Thomas Eriksen hopes something positive will emerge from last week's tragedy: that people here will treat each other with more respect and more recognition.‪

"So that it becomes more difficult for people on the right wing to generalize in pejorative terms about Muslims, and be concerned that we do have an emerging multicultural society here," he says, "and that everybody needs to have a place in it, that we have to create that sense of solidarity among the whole population and loyalty among the immigrants."

‪As the country emerges from shock and an intense period of mourning, Norwegians — indigenous and not — will have to engage together in dialogue, not in confrontation.‪