Accessibility links
Report Blames Sensor, Pilot In Air France Crash The crew piloting the Airbus 330 over the Atlantic did not appear to know that the plane was in a stall despite repeated warning signals, according to the report by France's aviation investigation agency. 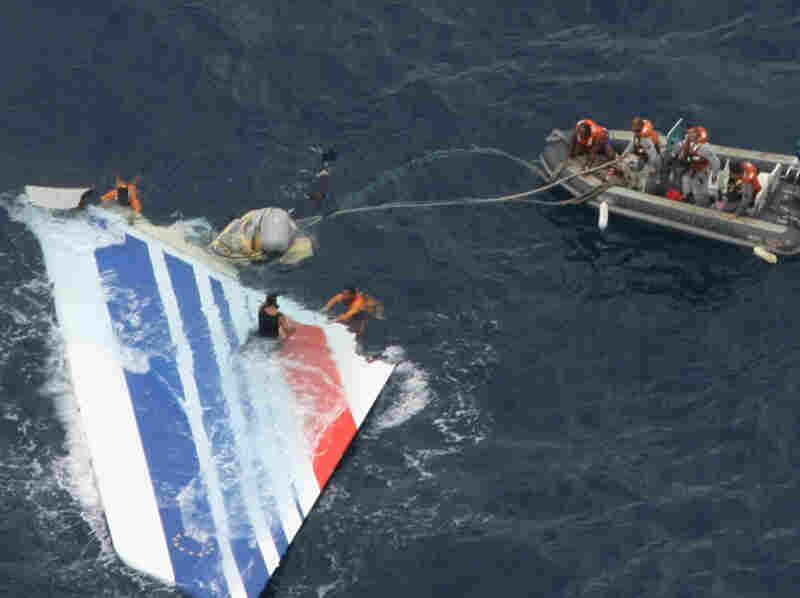 A long-awaited French accident report released Friday blames faulty air speed sensors and pilot error for the 2009 crash of an Air France flight from Rio de Janeiro to Paris, which killed 228 people. It was the worst accident in Air France's history.

The crew piloting the Airbus 330 over the Atlantic did not appear to know that the plane was in a stall despite repeated warning signals, according to the report by France's aviation investigation agency, or BEA.

It said a stall warning went off several times, once for 54 seconds, but the crew made no reference to it in cockpit exchanges before the jet crashed. The captain was on a rest break when the warnings began, and a co-pilot who was manually flying the plane in its final minutes maintained a nose-up position — contrary to the normal procedure to come out of an aerodynamic stall.

Normally, the report said, the nose should be pointed slightly downward to regain lift. The summary confirmed that external speed sensors obstructed by ice crystals produced irregular speed readings on the plane. That caused the plane's automatic pilot to switch off. Since the accident, Air France has replaced the speed monitors on all its Airbus A330 and A340 aircraft.

The BEA said neither of the co-pilots at the controls had received recent training for manual aircraft handling or had any high-altitude schooling in case of unreliable air speed readings.

Based on the findings, the BEA is recommending mandatory training for all pilots to help them fly planes manually and handle a high-altitude stall.

The agency's report, the most extensive to date, is based on analysis of the plane's voice and data recorders that were brought to the surface two months ago, after a two-year search. A final report is expected early next year.

In a statement, Air France said there was no reason to question the crew's technical skills. The airline said the report showed that a series of unlikely failures led up to the stall and crash, and that the pilots demonstrated a professional attitude and remained "committed to their task to the very end."