Accessibility links
I'm A Lefty And I Like Obama's Pick Of Rick Warren To many liberals, inviting the Rev. Rick Warren to the inaugural podium indicates Obama's lack of Democratic values. But those who think that haven't been listening. To Obama, it isn't about the left or the right-- it's about finding a middle that benefits everyone.

I'm A Lefty And I Like Obama's Pick Of Rick Warren

I'm A Lefty And I Like Obama's Pick Of Rick Warren

I'm a liberal. Free the whales. Tax the rich! I swear to you that not only do I drive a Prius, I turned in our Volvo for it. If you know any one of my political positions, you know them all. That's how embarrassingly stereotypical I am. So pardon me if I take a moment to give some advice to my fellow liberals and progressives: Chill out, will you?

You're already out criticizing our president-elect for betraying our side. He's gone soft on wiretapping, on raising taxes on the wealthy, and now you're having conniptions because Barack Obama has invited the Rev. Rick Warren onto the inaugural podium. The shame! The horror!

Rick Warren believes things that are anathema to liberals like me.

Rick Warren is against abortion choice and totally against gay marriage. I'm from Massachusetts. I'm totally for both those things.

But personally I'm delighted that Rick Warren was asked and he agreed to participate in the inauguration.

My lefty friends, you're not listening. All through the campaign, you thought Obama was just hiding his real views — which you assumed just had to be the same as yours — in order to get elected. Well, read Obama's book. Replay his speeches that you've TiVo'ed. Yes, Obama shares many key liberal views. But he's more interested in addressing a fundamental issue that we liberals have been just plain wrong about. And so have been the conservatives. That problem is that we're so damn angry at one another. All the time. For decades. We can barely live in the same country. The blue states sneer at the red states. The red states think the blue states aren't really America. We can't go on this way.

So in walks Obama. He's a blue state guy, of course. But he's getting us to do what seems impossible: to listen to what's best in what the other side is saying, because then you hear the shared values, and the other side isn't another side at all. That means you put Rick Warren up on the stage with you, because he disagrees with you. Yet he's there celebrating the moment when a person becomes a president of all the people. To progressives, Rick Warren is a symbol of views they disagree with. To the rest of the country, Rick Warren is a symbol of "the purpose driven life" that he has written about, a life lived for something larger than yourself ... a value liberals completely share.

And to Barack Obama, I believe Rick Warren's participation is also a symbol. Obama is modeling yet again how we can live together by finding what's good, and admirable, and right in what others believe, and not getting stuck only on what we disagree with.

Obama is redefining politics not by driving left or right, but by redefining patriotism. What does it mean to love your country?

To be convinced you know what's right and therefore to sneer at those who disagree with you? Or does loving your country in practice mean finding what's best in all your fellow citizens?

Obama's got an answer to that question. It's where hope comes from.

And if you don't know that, if you still only look through the lens of left and right, blue and red, you really have not been listening.

David Weinberger is at the Harvard Berkman Center for Internet & Society. 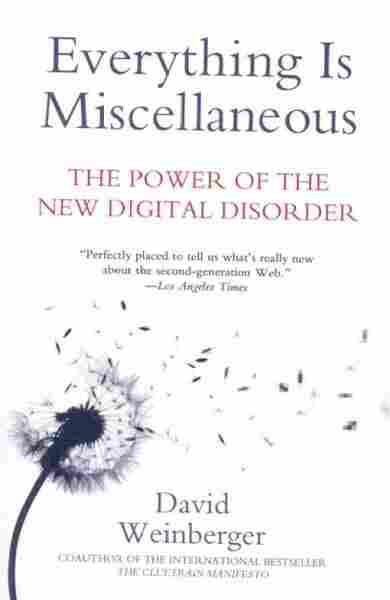 The Power of the New Digital Disorder