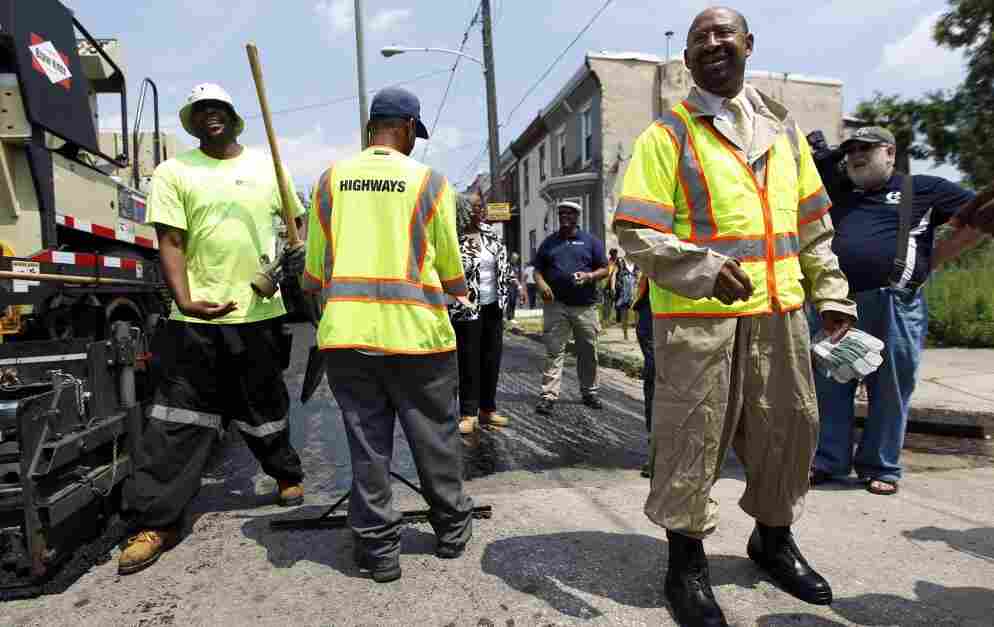 We did not lay off one sanitation worker, not one police officer, not one fire fighter or social worker or health department worker.

More than two years after the recession officially ended, mayors across the country are still struggling to balance their budgets.

Philadelphia avoided the big public employee layoffs seen in other cities by bucking national trends and doing what many consider unthinkable: raising taxes.

In 2009, Mayor Michael Nutter and the City Council doubled the local sales tax from 1 to 2 percent. In 2010, they increased property taxes 10 percent. And most recently, the city's Democratic leadership raised property taxes again — 3.85 percent to help pay for schools.

The tax hikes are temporary, but they allow Nutter to brag that the recession did not result in big cutbacks to city services.

"All 70 of our swimming pools are open. Every rec center is open. Every library is open. Every park is open, and all of our services are being provided," Nutter recently told a cheering crowd at the Philadelphia Senior Center.

A Glimpse Into The Life Of A 'Reformer' 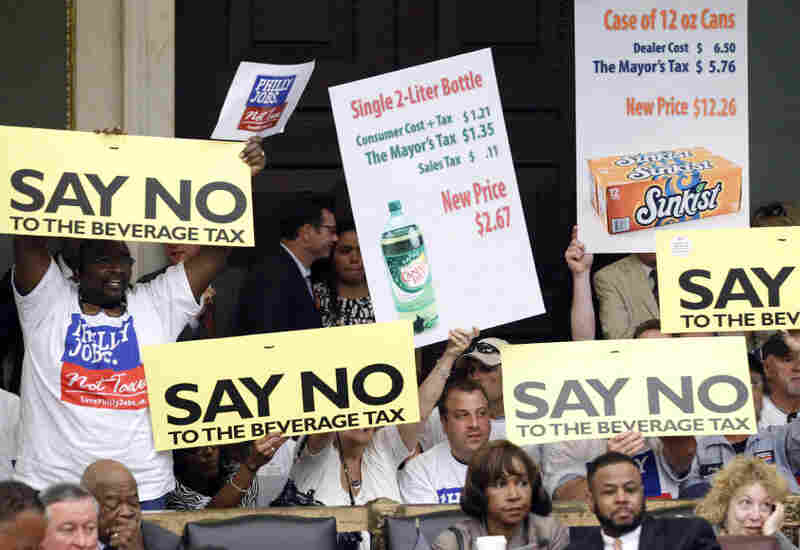 Opponents of a proposal to tax soda and other sugary drinks display signs at a City Council hearing in City Hall in June in Philadelphia. Mayor Michael Nutter has proposed the 2-cents-per-ounce tax on soda to generate money for the schools this year and help prevent deep cuts. Opponents, however, say it would cost hundreds of industry jobs. Matt Rourke/AP hide caption 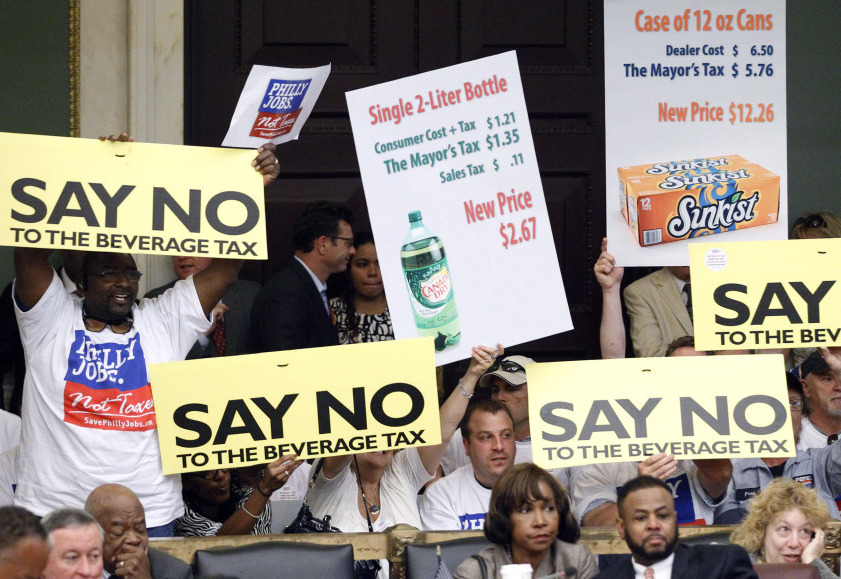 Opponents of a proposal to tax soda and other sugary drinks display signs at a City Council hearing in City Hall in June in Philadelphia. Mayor Michael Nutter has proposed the 2-cents-per-ounce tax on soda to generate money for the schools this year and help prevent deep cuts. Opponents, however, say it would cost hundreds of industry jobs.

Raising taxes wasn't Mayor Nutter's first choice. Shortly after taking office in 2008, he started with a plan to make dramatic cuts that included shutting down libraries. But the cuts did not go over well.

"They were roundly opposed by a whole variety of people," says Terry Madonna, director of the Center for Politics and Public Affairs at Franklin and Marshall College. "I think that set the stage for about how far city officials could go, politically, with cutting services."

But even in raising taxes, Mayor Nutter has had trouble getting what he wants. The most recent example was a tax on sugary drinks the city council rejected.

In a town where alliances and political machines still matter, Nutter has billed himself as a reformer. Sometimes he's seen as aloof and certainly not gregarious. But lately, the mayor has tried to soften his image. He was seen jumping into a city pool with children at the beginning of summer. And recently he was in the Mantua section of Philadelphia helping crews pave a narrow street.

Nutter likes to be seen doing things. He actually climbed up on the paving equipment and rode it down the street — examining the new blacktop along the way.

Resident Vanessa McDuffie watched from in front of her house, but the paving job was not what she wanted to talk about.

"We have a bad case of raccoons around here," says McDuffie. "We need the city to come out here and take care of that."

The scene provides a glimpse into the life of a mayor governing a large city with lots of problems. The mayor himself was driving by paving the road in front of McDuffie's house, but she wanted to talk about the raccoon problem.

As Nutter is quick to point out, the city's problems would be worse right now if leaders hadn't raised taxes to maintain services.

Unemployment numbers are seasonally adjusted.
Per capita personal income is for 2009. It is defined as income received by persons from all sources, including but not limited to the sum of wage and salary disbursements, supplements to wages and salaries, rental income, and personal dividend income.

"We did not lay off one sanitation worker, not one police officer, not one firefighter or social worker or health department worker," says Nutter. He adds that the city did save some money by not replacing about 1,600 workers who left their jobs.

A Difficult Relationship With Unions

While the mayor paints a nice picture, the city's largest unions are not impressed.

"We don't have a good relationship [with the mayor] at all right now," says Pete Matthews, president of the American Federation of State, County and Municipal Employees (AFSCME) District Council 33.

His members agreed to forgo wage increases and made other concessions at the start of the recession. But they haven't reached agreement on a new contract with the city.

"He [Nutter] wants to be a dictator in everything he does — he dictates terms," says Matthews. "I've yet to have a negotiation session with the mayor — the sessions have been with his people."

There is an election for mayor under way in Philadelphia, and polling has shown that Nutter is weak.

"Despite that fact, he won re-nomination [in the Democratic primary] easily," says political analyst Terry Madonna. "And he will go on to win a second term relatively handily."

In Philadelphia, winning the Democratic primary virtually assures a win in the general election. So Nutter's union critics seem resigned to the fact that he will continue to be mayor of Philadelphia after the Nov. 5 election.

Nutter and Philadelphia will face more difficult financial decisions then. The mayor estimates the city's pension fund has less than half the money it needs to make future payments. That is a $4 billion shortfall — a number larger than what Nutter is proposing for the city's entire 2012 budget.