Accessibility links
What Will We Watch As Drones Evolve? Drone technology is becoming increasingly affordable and accessible, with new potential for everyday use in the United States — and new worries for national security. 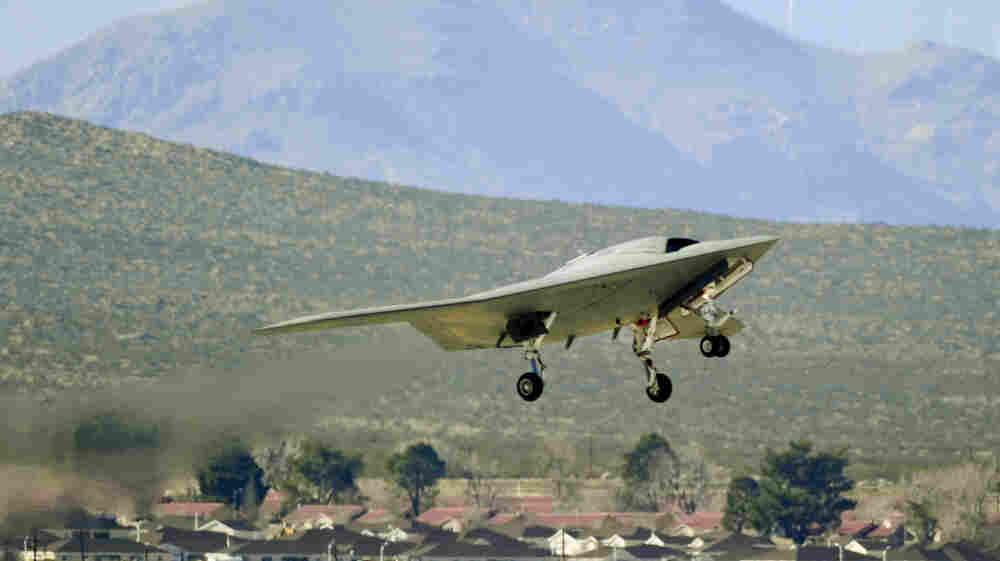 A drone takes its first flight at Edwards Air Force Base in California in February. In the near future, drones could be used outside of the military for things like traffic helicopters or flying jumbo jets. Alan Radecki/AP hide caption 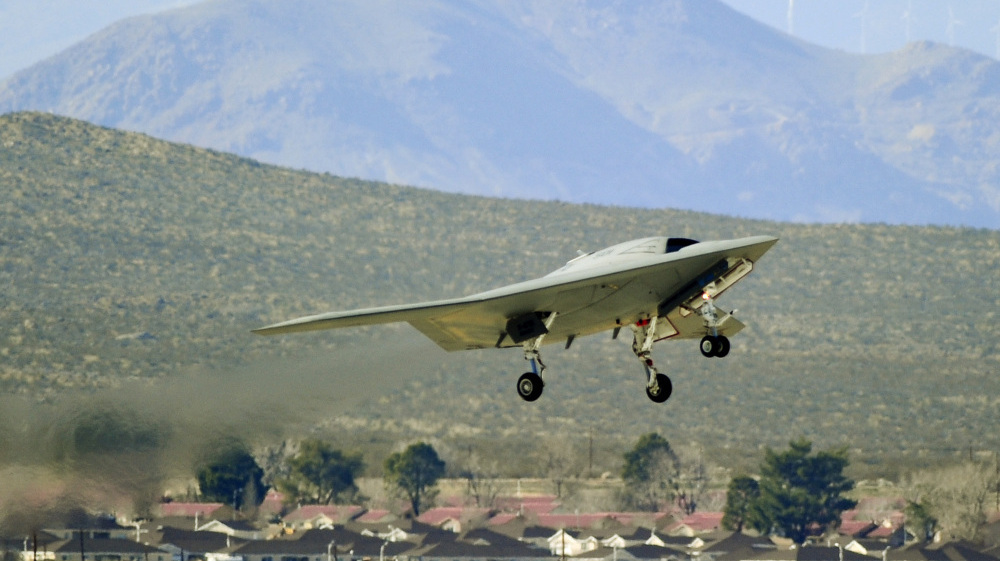 A drone takes its first flight at Edwards Air Force Base in California in February. In the near future, drones could be used outside of the military for things like traffic helicopters or flying jumbo jets.

Every week it seems there are reports about U.S. drones — unmanned, remote-controlled aerial vehicles — tracking down suspected terrorists in remote, unreachable areas of Yemen, Somalia, Libya or Pakistan. Drone technology is becoming increasingly affordable and accessible, with new potential for everyday use in the United States — and new worries for national security.

Shane Harris, journalist and author of The Watchers: The Rise of America's Surveillance State, tells Weekend Edition Saturday host Scott Simon there are several potential near-term uses for drones. The Customs and Border Protection unit of Homeland Security, for example, is experimenting with drones the size of small birds for monitoring the border.

Harris says drones have also been used in natural disaster situations, including at the Fukushima plant after the earthquake in Japan. Drones the size of spiders could inspect houses during hostage situations. He says drones are also likely to be used in mass farming to replace crop dusters or even herd cattle — even traffic helicopters could also be replaced.

The technology could theoretically also fly jumbo jets, Harris says, allowing companies like UPS and FedEx to use drones instead of people to fly their planes.

"It could certainly be much more efficient. They could perhaps fly routes that human beings can't fly. They certainly don't have to take breaks the way that humans do," he says. "Then that sort of raises the question ... would we ever feel comfortable — we, people, getting on a Delta or American Airlines flight that didn't have a pilot in it?"

Foreign Policy: If Drones Had Feelings, They'd Be Hurt

There are also national security implications in the development of drones, according to John Villasenor, a professor of electrical engineering at UCLA and a senior fellow at the Brookings Institution. He tells Simon the dialogue about drones generally focuses on U.S. usage.

"With the inevitable proliferation issues, we have to also consider the inverse problem, which is, what happens when people consider using drones against us?" Villasenor says. "And to the extent that drones are becoming significantly smaller, more widely available and less expensive, it becomes more difficult to ensure that they don't fall into the wrong hands."

In Japan, the Aum Shinrikyo cult considered using drones in the attack they carried out on the Tokyo subway system in the 1990s, but ultimately decided on other means.

"It's a sobering example, because here you have a group of people who were absolutely bent on and, in fact, did create a terror attack and ... drones were absolutely on their radar screen," Villasenor says. "So it stands to reason that they will be on the radar screen of other such groups in the future."

He says the noteworthy thing about drones is how quickly the technology has changed.

"You can imagine a world where you might be being attacked not by one drone but by a swarm of 150 of them and how in the world would you defend against that?" Villasenor says.

Even with an expensive defense system that could take down such an attack, other complications include what else might get vaporized in the process.

Once drones start to proliferate, Harris says, "it's going to be very hard to pull them back."

The Race Is On

There is a kind of drone race starting, he says. Harris says about 50 countries use surveillance drones, though not very many use armed drones the way the United States does. In a recent air show, China showed off drones that can attack aircraft carriers, which, Harris says, "look suspiciously like U.S. aircraft carriers."

"So they're definitely sending a signal to us and to other countries that, 'You're not the only ones who are going to be able to build these things and to fly them,'" he says.

Villasenor says the countries developing the technology could also sell it.

"The reason this can happen is that this technology in many ways isn't much different than what you have in a smartphone or a tablet or a laptop computer. That's why all these people can have access to it," he says. "This isn't your father's drone, where you had to be a very, very well-funded, very sophisticated military laboratory. In fact, a lot of the parts for these drones are available at electronic stores in every country in the world."

In as few as seven years, Villasenor says drones will be "incomprehensibly small by today's standards" and "not only affordable, but genuinely cheap."

The Department of Homeland Security did not respond to requests for an interview or comment.