Accessibility links
The Theft That Made The 'Mona Lisa' A Masterpiece A century ago, on a quiet morning in Paris, three men dressed as museum workers walked out of the Louvre with what was then a little-known Renaissance portrait. 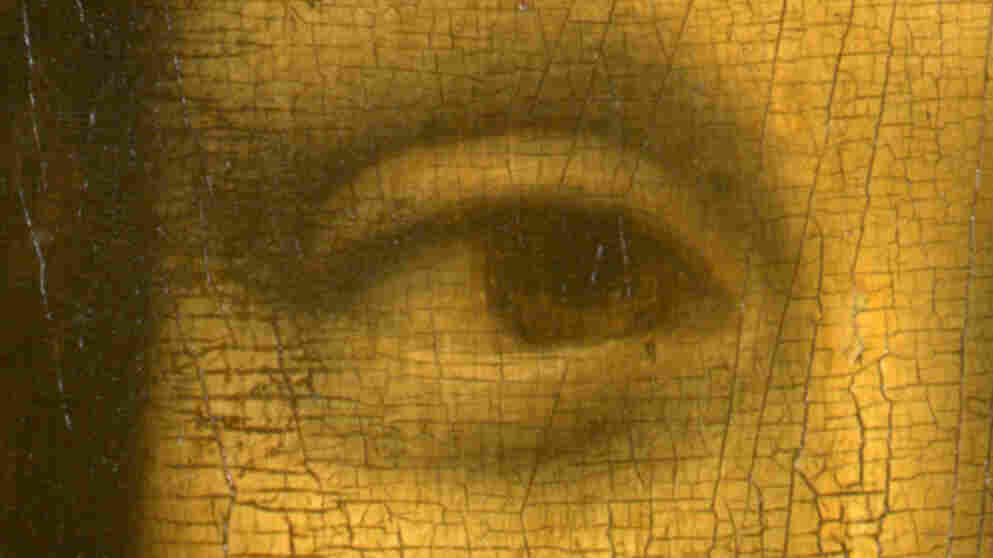 The right eye of Leonardo da Vinci's "Mona Lisa." On Aug. 21, 1911, the then-little-known painting was stolen from the wall of the Louvre in Paris. And a legend was born. Associated Press hide caption 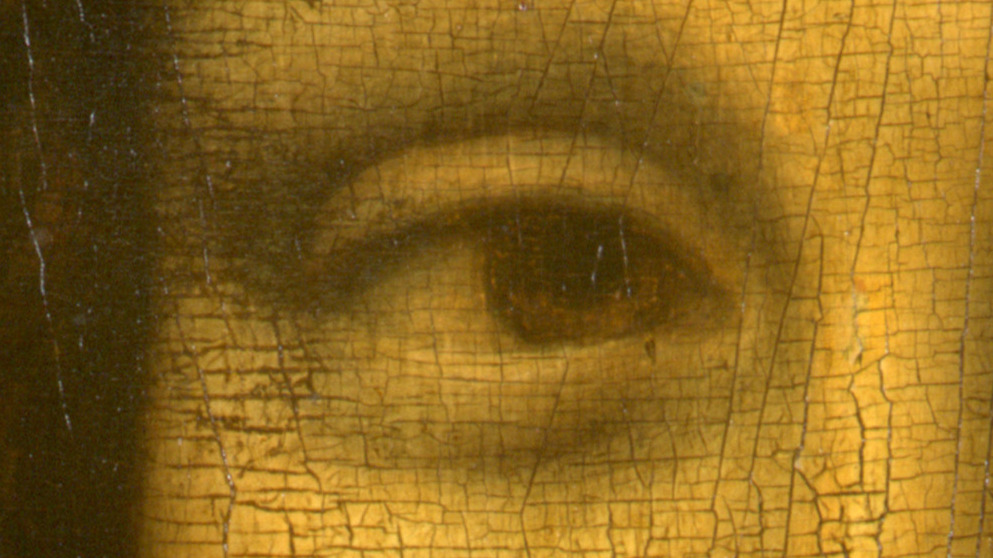 The right eye of Leonardo da Vinci's "Mona Lisa." On Aug. 21, 1911, the then-little-known painting was stolen from the wall of the Louvre in Paris. And a legend was born.

If you were standing outside the Louvre in Paris on the morning of Aug. 21, 1911, you might have noticed three men hurrying out of the museum.

They would have been pretty conspicuous on a quiet Monday morning, writer and historian James Zug tells weekends on All Things Considered host Guy Raz. "Sunday night was a big social night in Paris," he says, "so a lot of people were hung over on Monday morning."

The men, three Italian handymen, were not hungover. But they might have been a little tired. They'd just spent the night in an art-supply closet.

And on that morning, with the Louvre still closed, they slipped out of the closet and lifted 200 pounds of painting, frame and protective glass case off the wall. Stripped of its frame and case, the wooden canvas was covered with a blanket and hustled off to the Quai d'Orsay station, where the trio boarded a 7:47 a.m. express train out of the city.

Before its theft, the "Mona Lisa" was not widely known outside the art world. Leonardo da Vinci painted it in 1507, but it wasn't until the 1860s that critics began to hail it as a masterwork of Renaissance painting. And that judgment didn't filter outside a thin slice of French intelligentsia.

"The 'Mona Lisa' wasn't even the most famous painting in its gallery, let alone in the Louvre," Zug says.

Dorothy and Tom Hoobler wrote about the painting's heist in their book, The Crimes of Paris. It was 28 hours, they say, until anyone even noticed the four bare hooks.

The guy who noticed was a pushy still-life artist who set up his easel to paint that gallery in the Louvre.

"He felt he couldn't work as long as the 'Mona Lisa' wasn't there," Tom Hoobler says.

But the artist wasn't alarmed. At that time, there was a project under way to photograph the Louvre's many works. Each piece had to be taken to the roof, since cameras of the day did not work well inside.

"So finally he persuaded a guard to go see how long the photographers were going to have the painting," Tom Hoobler says. "He went off and came back, and said, 'You know what, the photographers say they don't have it!' " 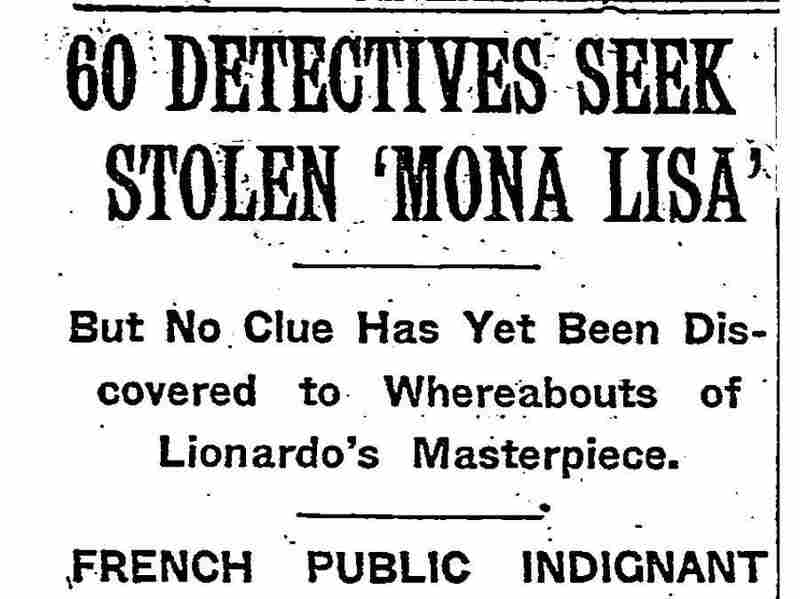 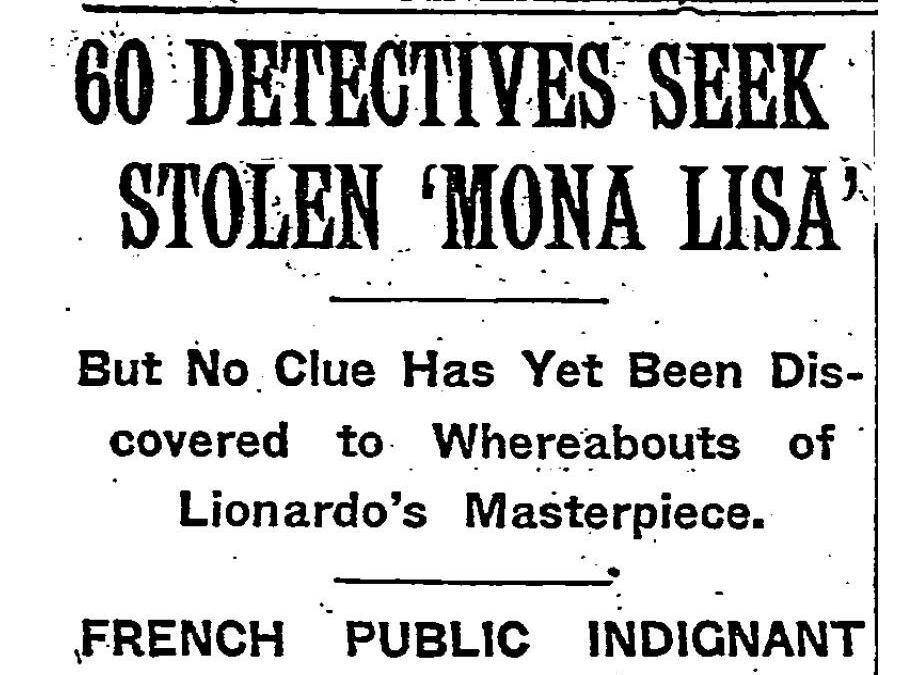 A New York Times headline from August 24, 1911, reported the investigation into the disappearance of the "Mona Lisa."

After the Louvre announced the theft, newspapers all over the world ran headlines about the missing masterpiece.

"In France, there was a great deal of concern that American millionaires were buying up the legacy of France — the best paintings," Dorothy Hoobler says. At one point, American tycoon and art lover J.P. Morgan was suspected of commissioning the theft. Pablo Picasso was also considered a suspect, and was questioned.

And as tensions were escalating between France and Germany ahead of World War I, "there were people who thought the Kaiser was behind it," Hoobler says.

After a weeklong shutdown, the Louvre re-opened to mobs of people, Franz Kafka among them, all rushing to see the empty spot that had become a "mark of shame" for Parisians.

Meanwhile, the thieves had made a clean getaway. They were three Italians: two brothers, Vincenzo and Michele Lancelotti, and the ringleader, Vincenzo Perugia. He was a handyman who had worked for the Louvre to install the very same protective glass cases he had ripped from the "Mona Lisa."

Perugia hoped to sell the painting. But the heist had received so much attention that the "Mona Lisa" became too hot to hock, Zug says.

"Within days, newspapers were offering rewards. [Perugia] could have brought it in, but I think the main reason he didn't do that is he was worried about being arrested — and that the story was so big that he probably didn't think he could get away with it."

So Perugia stashed it in the false bottom of a trunk in his Paris boardinghouse. 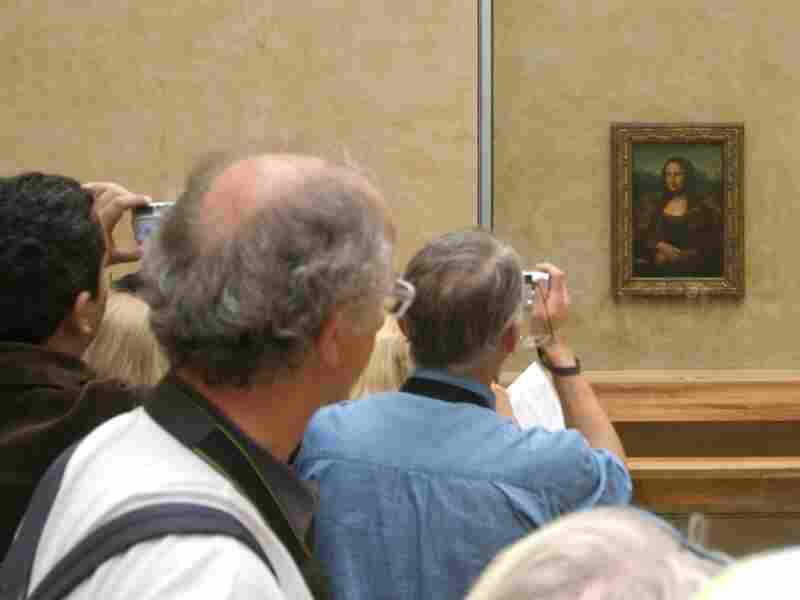 Of the more than 35,000 works of art in the Louvre, perhaps none is more popular than the Mona Lisa. KIKE CALVO/AP hide caption 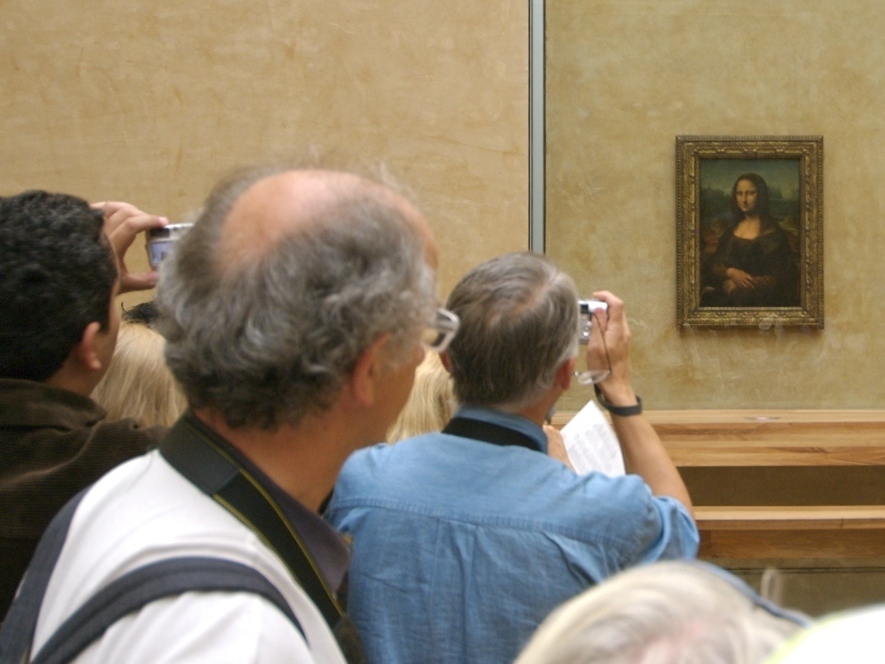 Of the more than 35,000 works of art in the Louvre, perhaps none is more popular than the Mona Lisa.

Twenty-eight months after he snatched it from the Louvre, Perugia finally made a pass at selling the "Mona Lisa" to an art dealer in Florence.

But the dealer was suspicious. He had the head of an Italian art gallery come take a look at the painting.

A stamp on the back confirmed its authenticity.

"They said, 'OK, leave it with us, and we'll see that you get a reward,'" Tom Hoobler says. Perugia went back home. But half an hour later, to his surprise, the police were at his door.

And so, with much fanfare, the painting was returned to the Louvre. Perugia pleaded guilty to stealing it, and was sentenced to just eight months in prison.

But a few days after his trial, Dorothy Hoobler says, World War I broke out. Suddenly, the drama of an art heist was off the front pages.

"This seemed like a very small story," she says.

James Zug recently wrote about the Mona Lisa for the Smithsonian Magazine.