Accessibility links
Obama Faces Grumbling On The Left President Obama may have lost a direct hand in the debt-limit negotiations, but some of his liberal base is still seething at the concessions he was willing to make to Republicans. Will he lose support in 2012? 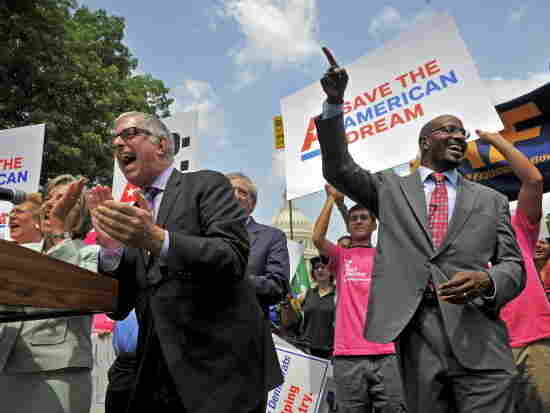 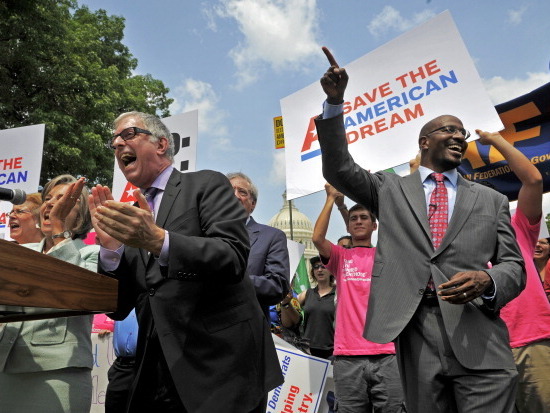 President Obama may have lost a direct hand in the debt-limit negotiations, but some of his liberal base is still seething at the concessions he was willing to make to Republicans — especially Social Security and Medicare cuts that may yet be in the offing.

When a few hundred liberal activists protested outside the Capitol on Thursday, they vented most of their frustrations at Republican lawmakers — especially the Tea Party caucus — who called for deep cuts to safety net programs in exchange for raising the debt ceiling. But they also blamed Obama for agreeing to put entitlement programs on the bargaining table at all.

That discontent is starting to seep into the deepest corners of Obama's base. A Washington Post/ABC News poll released this week showed the president's poll numbers falling, even among liberals and African-Americans — his most loyal backers. Only 31 percent of liberal Democrats expressed strong support for Obama's record on jobs, a severe drop from 53 percent last year. And slightly more than half of blacks believe Obama has helped the economy, compared with 77 percent of them in October.

To his liberal supporters, Obama's concessions on the debt plan were just his latest failure to defend core Democratic principles. Last year, he extended the Bush-era tax cuts for the wealthiest Americans and gave up the public option in the health care debate.

I think one of the reasons the president has been able to move so far to the right is that there is no primary opposition to him, and I think it would do this country a good deal of service if people started thinking about candidates out there to begin contrasting what is a progressive agenda, as opposed to what Obama is doing.

"Most progressives who care about what the central legacy is of the Democratic Party — like the creation of Social Security and Medicare — are astounded by what the president was willing to put on the table," says prominent liberal activist Robert Borosage, president of the Campaign for America's Future. "These are not progressive policy reforms, nor what the president campaigned on."

Obama sees it differently. "I view Social Security and Medicare as the most important social safety nets that we have," he said at a press conference on July 15. "I think it is important for them to remain as social insurance programs that give people some certainty and reliability in their golden years. But it turns out that making some modest modifications in those entitlements can save you trillions of dollars. And it's not necessary to completely revamp the program."

That didn't mollify the activists who gathered outside the Capitol this week. "What's on the table right now is an embarrassment," John Gage, president of the American Federation of Government Employees, which claims 600,000 members nationwide, told protesters. "Brothers and sisters, I'll tell you, I'm tired of losing. We will draw a line on Social Security and Medicare. We're not going back!"

To demonstrate their opposition to Medicare cuts, some of Thursday's protesters at the Capitol wore hospital gowns that opened in back, exposing fake rubber buttocks. They also wore signs that said, "Don't Leave Us Uncovered."

One of the president's own former advisers even leveled a thinly veiled shot at him. It came from Van Jones, Obama's former environmental policy adviser, whose new progressive group, American Dream Movement, helped organize the event.

"The movement for change did not have a slogan of 'Yes He Can,' " Jones said in an interview after the rally, referring to Obama's 2008 presidential campaign. "It was 'Yes We Can.' We can influence both parties to do what's right. Everybody in this town, both parties, needs to listen to the 60 to 70 percent of Americans who don't want to see Social Security destroyed."

Liberals were stunned at some of the concessions President Obama seemed willing to make in the debt-ceiling negotiations, especially when it came to the two big entitlement programs.

Obama was willing to change the inflation index used to calculate cost-of-living increases for recipients. Adopting the so-called "chained Consumer Price Index," would generate savings. But it also would slightly lower benefit payouts. Democratic activists would prefer to lift the cap on how much income is subject to Social Security payroll taxes.

Both debt-ceiling proposals in Congress would create an appointed committee to propose future cuts to the program.

Obama was open to raising the eligibility age to 67 from 65, a move that would save roughly $124.8 billion between 2014 and 2021, according to the Congressional Budget Office.

Recently, staunchly liberal Sen. Bernie Sanders of Vermont, an independent who caucuses with the Democrats, told talk radio host Thom Hartmann that Obama should face a primary challenger in his 2012 re-election bid: "I think one of the reasons the president has been able to move so far to the right is that there is no primary opposition to him, and I think it would do this country a good deal of service if people started thinking about candidates out there to begin contrasting what is a progressive agenda, as opposed to what Obama is doing."

Will the Democratic left really abandon Obama next year? Liberals themselves acknowledge that isn't likely, mainly because there's no viable alternative.

Others say Obama's pitched battles with House Republicans may actually energize their core supporters next year.

"I think that it enhances our ability to turn out the base," Rep. Keith Ellison (D-MN), co-chair of the Congressional Progressive Caucus, said as he left the rally. "I wish he wouldn't have done it," he said of Obama offering up social safety net programs for cuts. "But I don't blame the president for it. He doesn't want to cut these programs. He sort of made a desperate offer."

Even the president's most liberal critics acknowledge that cutting deals with the GOP is not what makes Obama most vulnerable in 2012.

"The point is, what kind of enthusiasm will he get when he goes out and knocks on the doors of the independents and working families when unemployment is at 9 percent?" Borosage says. "If you make the economy worse with this, I can assure you it will have a much more damaging effect to his re-election chances than any agreement he comes to with Republicans."